Sold for $5,610,000 at 2014 Gooding & Company : Pebble Beach Concours.
Sold for $4,840,000 at 2017 Gooding & Company : Pebble Beach.
There were 40 examples of the Ferrari Pinin Farina Cabriolets Series 1 Cabriolets produced between 1956 and 1959. The term 'series' is somewhat misleading since each of these cars are unique in its combination of mechanical specifications, exterior details, and interior appointments. The 40 examples share the same basic 250 GT chassis and styling. All of the Series 1 Cabriolets were clothed by Pinin Farina.This car, chassis number 1475 GT and body number 19473, is the last example constructed. As with nearly all late-production Cabriolets, 1475 GT was given full-width bumpers. It is one of only four examples built with the open headlamp treatment, and one of only two that has the tall vertical taillights that were later incorporated into Pinin Farina's 250 GT Coupe and Series II Cabriolet. Upon completion, the car was finished in the color scheme of Giallo Solare (Sun Yellow) with brown Connolly leather upholstery.1475 GT is one a few Pinin Farina Cabriolets (three known and possibly as many as 10) that were factory equipped with a Lucas starter, voltage regulation, coils, plug wires, twin rear-mounted distributors, and generator. 1475 GT is the only Series I Cabriolet that was constructed with a Lucas parallel wiper system, in lieu of the standard 'clap-hands' system.
The car has an improved six-blade cooling fan, and its radiator was equipped with a roll-up blind instead of the standard actuating louver system. The later 250 GTs had a more resolved system to raise and lower the radiator blind. With this car, however, the actuator for the louvers was modified by drilling a hole in the pivot pin, thus allowing the cable to pass through and pull up the blind.
The car was completed on August 27th of 1959 and sold to Eric Don Pam, an American citizen living in Monaco, who took delivery at the Ferrari factory and had the car registered on Italian tourist license plates 'EE 30001.' By January of 1963, the car had been registered on American license plates and was recorded as having 36,000 km. In the mid-1960s, the car was exported to the United States and spent approximately 10 years in Florida. By 1974, the GT was owned by proprietor of Simpson Automobili Sidney J. Simpson, a Ferrari specialist in Houston, Texas. Two years later, Mr. Simpson offered the Cabriolet for sale in Ferrari Market Letter. Mr. Hilary A. Raab Jr. spotted the car in the ab and soon became its next caretaker. In 1989, Mr. Raab took the car on the inaugural Colorado Grand. After the event, the engine was rebuilt and it has since covered approximately 8,000 miles including two other Colorado Grands and two Copperstate 1000 rallies.The car is current finished in the color combination of Amaranto Bull Lea, a rich metallic dark red, with Crema Connolly leather upholstery. The car has never been fully restored from the ground up. It currently retains its factory-applied undercoating, hood pad, and original rubber matting under the spare tire.
By Daniel Vaughan | Oct 2014 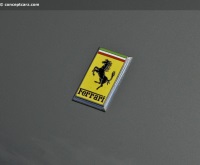 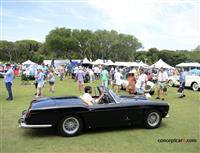