Sold for $170,500 at 2014 RM Auctions - Hershey.
Sold for $80,300 at 2020 RM Sothebys : Open Roads, North America.
The 1930s would see the era of the 'woodie' come into full swing. Many of the major manufacturers would build examples of the station wagon concept complete with wood paneling along the sides. And, while some were simply about function over form, Packard's contribution would also include form into the equation. Beautifully rounded and sculpted front and rear fenders combined with a metal or cloth top extending toward the back would give the impression of there being, at the heart of Packard's Station Wagon, a heart made of beautiful wood. It was purposeful, fighting the grip of the Great Depression, Packard would effort to combine the hauling and load-bearing capabilities of the woodie station wagon with its more luxurious limousines. The resulting amalgamation would debut in the middle of 1937.This particular example, with the vehicle number 1060-1051, would be one of the earliest and surviving examples of the Packard Six Station Wagon. However, its limited status doesn't begin and end there.
It is believed that only about 60 examples of the Packard Six Station Wagon would be built over the course of 1937. Of those built, only a handful would sport a body finished by Baker-Raulang of Cleveland, Ohio. This is one such example. The truth is, the fact this particular example bears a Baker-Raulang body supports the notion of this being an early example of the Six Station Wagon as Baker-Raulang would only build a few examples for Packard and they would all be the early examples of the concept.
John Moir would purchase the car from a Mr. Brian Allen of Meredith, New Hampshire. Mr. Allen had procured the car from a motorcycle collector in Maine and set about restoring the Station Wagon. The engine would be rebuilt, the chrome re-plated and the body refinished in factory-correct Coachman Green. Sadly, when Moir came to own the car, the wooden body would be in great need of restoration. The task of replacing the panels would be given to Ron Fullmer of Guilford, New Hampshire. Fullmer would painstakingly measure each piece and would even effort to rebuild the panels in the same manner as what Baker-Raulang would have. Even though he would have restoration efforts undertaken, Moir would not discard its original pieces of timber. The driver's door remains and bears the name of the town 'North Woodstock' on it. The restoration efforts would combine beautifully with the Coachman Green finish and would lead to the station wagon taking part in the 1999 Packard Magnum Opus, which was held in Warren, Ohio. Complete with copious amounts of articles, receipts, photographs, and other restoration materials, the 1937 Packard Six Station Wagon would be part of RM Auctions' 2014 Hershey event. Leading up to the auction on the 9th of October, the Packard Six Station Wagon would draw estimates ranging from between $80,000 and $120,000. When the bidding came to an end, it would be more than obvious this rare Baker-Raulang Six Station Wagon was under-appreciated. A final sale price of $170,500 would demonstrate Packard's achievement combining form with function.By Jeremy McMullen 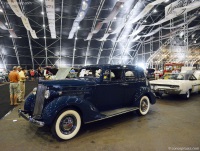