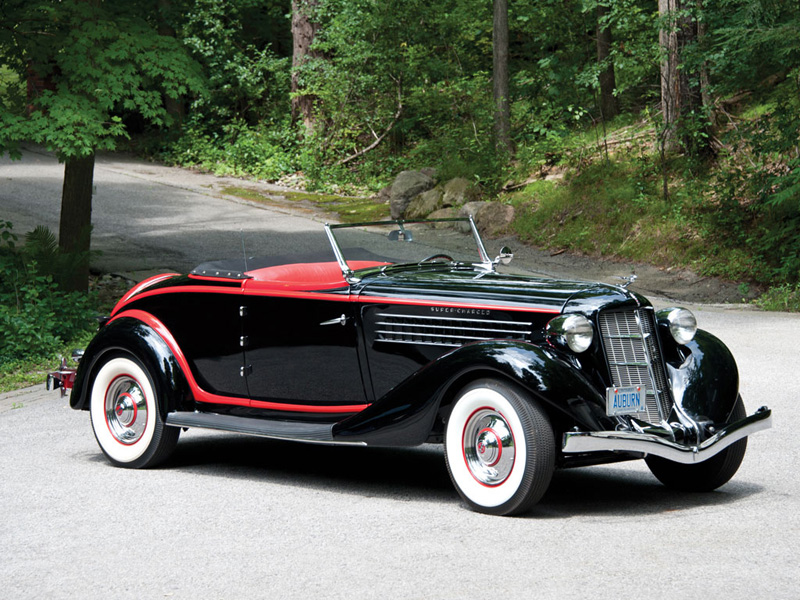 Supercharged Dual Ratio Cabriolet
Chassis #: 33826 F
Engine #: GH 4465
Sold for $220,000 at 2014 RM Auctions - Hershey.
Sold for $132,320 (€117,500) at 2019 RM Sothebys : Essen.
Founded in Auburn, Indiana, the Eckhart Carriage Company would open its doors for business in 1874. Just 50 years later, what would become Auburn Automobile Company would be in the midst of hard economic times. Enter Errett Lobban Cord. Still utilizing the Auburn name, Cord's team would turn the struggling company into one of the most imaginary of its day. Even to the point when production ceased in 1937, the Cord and Auburn remained a striking representation of the future.The popularity of Auburn, especially its Speedster would be unchallenged. There was absolutely no doubt Alan Leamy and Gordon Buehrig had turned the struggling Auburn Automobile Company into a portal into the future. Unfortunately, the future was being gripped too tightly by the present. And the present was an ever-deepening depression. Artistic style didn't translate into automobiles sold when priced out of reach for those barely able to keep the lights on and food on the table. Auburn, and Cord for that matter, were in decline. Despite the downward trend of the company, nobody could accuse Auburn for not trying, and for not going down without a fight. The simple fact of the matter was Cord and his team were willing to fight tooth and nail for their kind of automobile. Unfortunately, the economy and some questionable business decisions would prove the greater combatant.
Fearlessness and elegance would have to be two adjectives used to describe Auburn throughout the 1930s. In spite of the company's struggles, perhaps its greatest works of art would come rolling out of the factory in Indiana.
Auburn had its clientele. Such designs as the Boattail Speedster and the Cabriolet would be instant hits with the Hollywood elite. Unfortunately, there wouldn't be enough of the Hollywood elite to keep the company afloat; had there been it is nigh on impossible to tell what might have been. Radical met elegance; aggressiveness met simple and laid-back. This was never more true than with its supercharged Eight Cabriolet. By 1934, Auburn's decline was in full motion. There had been strong signs in the first couple of years after that tragic Black Tuesday, but they would be gone by the end of 1933. So too would Al Leamy. He would leave amidst some controversy, leaving just Buehrig and his team to help right the ship.Leamy had helped before he left the company. He had produced some new designs and Buehrig would concentrate on ways of making them better following Al's departure. Having partnered with Duesenberg in the past, Leamy's design would borrow some of its lines from Duesenberg models. The tall, narrow nose and sloping, wide rear end would be simply elegant and straight-forward. The drooping front fender and small touches of chrome would all be touches of design genius from Buehrig. But it wouldn't end there. Buehrig would take the appealing aerodynamic look achieved by the grill and fender and would design beautifully-arching pontoon-style fenders out over the front fenders. The whole concept would appear both at speed and at rest at the same time. While Auburn's design team were busy creating artistic masterpieces in which to contain the engine and the rest of the chassis, Augie Duesenberg and Pearl Watson would be busy producing magic joining together a Lycoming straight-eight engine, its innovative planetary drive system and a Schwitzer-Cummins centrifugal supercharger.
Producing 150 heart-thumping horsepower, the L-head eight-cylinder engine was the engine offered in the Boattail Speedster. However, in an attempt to improve the numbers on the ledger, the supercharged eight-cylinder would be made available for the 851 and 851 lines of automobiles. This meant the aggressively-elegant cabriolet qualified.
One of those Series 851 Cabriolets that would get the powerful eight-cylinder engines would be chassis 33826 F. Offered for sale in 1935, Auburn was just a couple of years away from closing its doors when this particular example rolled out of the factory. Unlike many in existence, this is a true cabriolet and would be one of the draws for Auburn Cord Duesenberg Club member Jim Miller. Miller lived in Baden, Ontario and would be quite well known for what was called his Blackhawk Collection. Over a decade ago, the current owner, another Auburn Cord Duesenberg member, would purchase the Auburn. He would quickly turn his attentions to restoring and refinishing the car in a manner that would be certainly befitting of the look of the supercharged cabriolet, but also, in a manner that would befit having been a member of the Blackhawk Collection. Trimmed with rich red leather interior, the cabriolet would be refinished with the same color red serving as accent trim to a striking black livery. The chrome grille and accents would pop against the background and other such details, including the 'Auburn' name over the covers only add to the compelling look.A winner of numerous awards and trophies in local and regional events, it is easy to perceive why Auburn's best days should have been before them. Instead, all we are left with are their interpretations of the future—sleek, romantic and bewitching. Offered through RM Auctions' Hershey event, the 1935 Auburn Eight Supercharged Cabriolet would earn a sale price of $220,000.By Jeremy McMullen