Sold for $335,500 at 2015 RM Auctions - Automobiles of Arizona.
When Ferrari introduced their mid-engined 365 GT4 BB, it was partly in-response to Lamborghini's Miura and subsequent Countach, and the Maserati Bora. Clearly, the supercar world was being supplied with many suitable alternatives, and Ferrari proved it could keep pace i the new era by introducing the fastest road car the company had ever built. Between 1973 and 1976, less than 400 examples were built. In its wake came a more livable 512 BB, reviving the historical 512 racing car's nomenclature and diverting away from the Ferrari's previous naming convention. The 512 BB had an enlarged, 4.9-liter 12-cylinder engine with a higher compression ratio and four triple-barrel Weber carburetors. This powerplant gave the car a mid-five-second 0-100 km/h sprint time and a top speed of 280 km/h. In comparison to the car it replaced, the 512 BB had wider rear tires and an extended rear track. It retained Pininfarina-penned styling and was given a new lower chin spoiler up front, as well as a NACA duct on the side to cool its exhaust system. In the back were twin tail lamps, replacing its predecessor's trip unit setup.Though still produced in limited numbers, production exceeded its 365 GT4 BB sibling, nearly reaching 1,000 units sold. Since Ferrari believed that the vehicle should not be detuned to comply with increasingly stringent emission standards, the car was not sold in the United States. However, numerous 512 BBs were certified by independent importers for the American market.
This particular examples shows just 23,000 kilometers on its odometer. The car was purchased new by the owner of Amerispec Corporation, Richard Fritz, of Danbury, Connecticut, and it was certified for the American market by his company, which was the leading importer of Ferraris that specialized in DOT/EPA conversions. The car remained in Fritz's care throughout the 1980s before being sold to its second owner. In 1999, the car was acquired by a collector in Texas, who kept the car for an additional 12 years, with just over 22,000 kilometers accumulated on the odometer. The current owner acquired it several years ago, and it has recently been given a substantial engine-out service. Other service performed on the car includes adding new fuel pumps to the flat 12-cylinder engine.
The car has a Tubi exhaust system, which is the car's only modification from stock. It rides on correct Michelin tires and the exterior is finished in Rosso Corsa paint. Inside, there is black leather trim, an original radio, along with tire tools, a manual, and an extra uncut key.
By Daniel Vaughan | Jan 2015 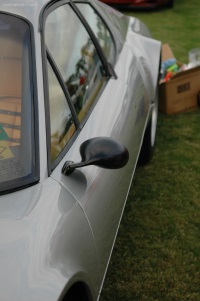