Sold for $4,455,000 at 2004 Gooding & Company Pebble Beach Auction.
The 1935 Duesenberg SJ Speedster, commonly known as the Mormon Meteor, is a masterpiece in all respects, from performance to design. It proudly carries the name of Ab Jenkins on its side, right in front of the drivers cockpit. Jenkins drove this Duesenberg Special to a number of land speed records at the Bonneville Salt Flats proving to all that its supercharged 420 cubic-inch eight-cylinder engine which produced an astonishing 400 horsepower was among the fastest automobiles on the planet. The duo were perfect for each other, Jenkins and the Mormon Meteor, as Jenkins is remembered as a sportsman and a gentleman rather than just a daredevil or thrill seeker. He amassed a legacy known for racing, speed trials, endurance runs, land speed records, and even Mayor of Salt Lake City. Herbert Newport, body designer for Duesenberg, created the Duesenberg Special from a standard 142.5-inch Model J Duesenberg chassis. He was tasked with creating an aerodynamic body that would embellish both form and function. The front of the car has a sloped radiator grille that merged into the curvaceous body. The long hood gracefully flows back to the cockpit area where there is seating for two. This area is very narrow and was designed to have minimal frontal area and create less wind resistance. The rear end has a tapered tail, designed to reduce turbulence and drag. All four tires are currently covered with fenders, though they had been removed during the land speed record attempts. These fenders have a teardrop design which aide in the vehicles aerodynamics and give the appearance of motion even at a stand-still. Originally, the car had no doors; they were added by Jenkins after it was retired from land speed record attempts. The stock Duesenberg SJ engine produced 320 horsepower, which was a very impressive figure for the time, and one that was hard to beat. Augie Duesenberg improved horsepower output for the Special, bringing it to 400. Improvements to the engine included the adaptation of two Bendix-Stromberg carburetors, camshafts created by Ed Winfield, and various other modifications. Apart from lowering the front axle for stability at speed, the drive-train and suspension components were from the stock Model J.
Upon completion, the car was brought to the Indianapolis Motor Speedway for testing. Happy with the results, the car was then sent to Salt Lake City and the Bonneville Salt Flats. On its first attempt it was met with teething problems and after 300 miles was forced to retire due to mechanical difficulties. New bearings were fitted to the engine and a second attempt was made. This too ended prematurely, this time it nearly reached the 2,000 mile mark when a crankcase split.
Two engines had originally been created, and the Duesenberg Special crew took this opportunity to swap engines. Tony Gulotta, an Indy 500 racer, drove the car on its third attempt. The car was driven for 24 hours at a speed of 135.58 miles and covered 3,253 miles. It had captured many new records during this attempt and raised the bar for all other competitors. The 24-Hour record would stand for only a short time, as a car driven by Captain Eyston would increase the record to 140.5 mph in a 24-Hour period.Jenkins purchased the Duesenberg Special from Duesenberg for the sum of nearly $5,000. With the help of Augie Duesenberg and Lycoming, a mammoth 1,650 cubic-inch Curtiss Conqueror V12 was installed in the engine compartment. It was given the name, 'Mormon Meteor', and brought back to the Salt Flats in 1936. By now, the 24-Hour land speed record had been increased to 149.096 mph by Eyston. Jenkins was determined to break that record. With the help of co-driver Babe Stapp, the Mormon Meteor was driven to a record in its first 12-Hours, averaging 152.84 mph and taking that title away from Eyston. The car would have to settle with this record for the time-being, as a failure in the driveshaft universal joint just after the 12 hour mark meant the car was unable to finish the 24 hours.As the Mormon Meteor was undergoing repairs, John Cobb took the 24 Hour title away from Eyston by driving at an average of 150.163 mph for 24-Hours. When the Mormon Meteor was given another attempt, this time it would be successful. It averaged 153.823 mph for 24 hours and 148.641 for 48 hours.The car was retired from land-speed record attempts at the conclusion of the 1938 season. Slight modifications were made to the car to make it more road-going friendly, such as the addition of a top which made it more versatile in all driving conditions. The V12 engine was removed and replaced with the SJ Special engine number J557. The car was driven by Jenkins and his son Marvin for around 20,000 miles before selling it in 1943 to a Los Angeles resident named Bob Roberts. Roberts kept the car for a few years, selling it to a Chicago resident in 1946. Two years later it was sold to a resident of Georgia named Ben Hudson. While in his care, the engine was rebuilt. Ownership later changed to another individual, who had the car restored to its 1937 road configuration. The restoration was completed in 1962 and has captured many awards since that time, including a CCCA, AACA, and A-C-D Club first place awards. The car passed through ownership throughout the years before it was brought to the Gooding & Company's Pebble Beach Auction in 2004. The car found a new owner for the sum of $4,445,000.
Two years later, the car returned to Pebble Beach, this time as an entrant to the Concours d'Elegance. The featured marque's were Aston Martin, Auburn, Cord and Duesenberg. The Duesenberg marque has won the top award at Pebble on five occasions. In 2007, the Duesenberg again won top honors, as the Mormon Meteor was named Best in Show.
By Daniel Vaughan | Mar 2011

Sold for $4,455,000 at 2004 Gooding & Company Pebble Beach Auction.
Duesenberg was founded in 1913 by Fred and August Duesenberg to build sports cars. Born in Lemgo, Germany, the two brothers were self-taught engineers and were famous for their high-quality, record-breaking roadsters. In 1914 Eddie Rickenbacker drove a 'Duesy' to finish in 10th place at the Indianapolis 500, and Duesenbergs won the race in 1924, 1925, and 1927. In 1921, Jimmy Murphy became the first American to win the French Grand Prix when he drove a Duesenberg to victory at the 24 Hours of Le Mans.E.L. Cord, of Cord and Auburn Automobile, bought the company in 1926 in order to produce luxury cars. The Model J debuted at the New York Car Show of 1928. In unsupercharged form, it produced 265 horsepower. The supercharged version produced up to 400 horsepower, and had a top speed of 140 mph in third. Duesenbergs were driven by the rich and famous, among them Clark Gable, Gary Cooper, and the Duke of Windsor.This extraordinary 'Mormon Meteor' went 135.47 mph for 24 hours, and for one-hour over 152 mph, in 1935 at the Bonneville Salt Flats.
Duesenberg was finished in 1937. It was said, 'The only car that could pass a Duesenberg, was another Duesenberg, and that was only with the first owner's consent.'
The car was first shown at Pebble Beach under the ownership of Knox Kershaw. It sold for a record $4.45 million at the 2004 Pebble Beach Auction conducted by Gooding & Company, and the car's new owner Harry Yeaggy, returned it to its early race configuration. 'In my opinion, this is the most significant American car ever built,' said Yeaggy. The car's win at Pebble Beach underscored the judges understanding of its historic importance in addition to their appreciation of its style. 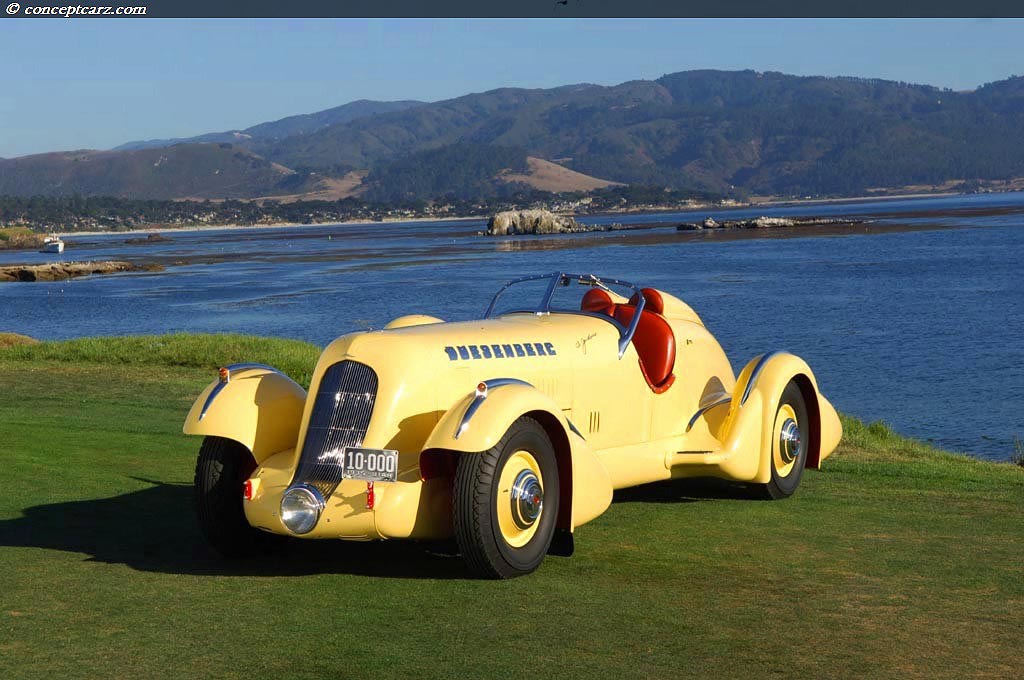 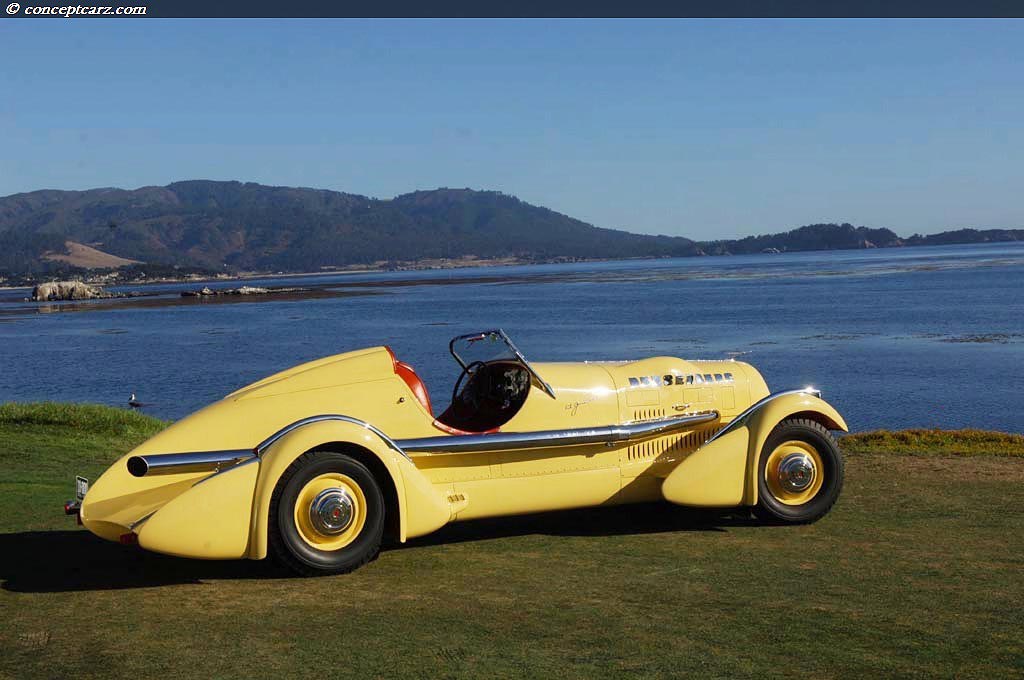 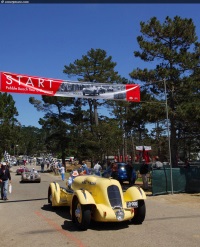 1935 Duesenberg Model SJ Special Mormon Meteor's that have appeared at auction but did not sell. 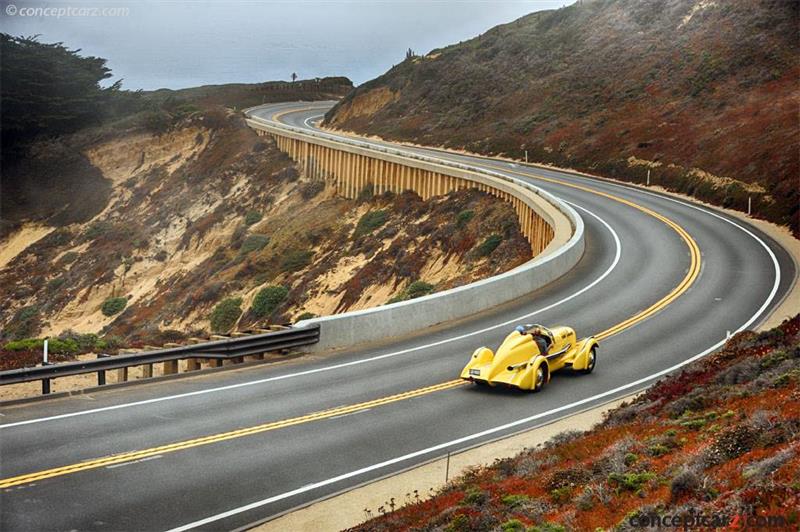