Sold for $1,237,500 at 2017 RM Auctions : Amelia Island.
This Rolls-Royce was initially specified as a Croydon Convertible Coupe, but that order was subsequently changed to the Special Newmarket Permanent Sedan. None of the sixe examples were exactly the same, with each being truly unique. This particular example was one of three with the Henley Roadster-style side molding, raked split windshield, and sloping tail, and is the only example with extended front fenders that cover the side-mount cradles and undercarriage.This Rolls-Royce was delivered on March 14th of 1933, to E.L. King. Mr. King also purchased a second similar sport sedan (number 295AJS), and a Henley Roadster (number 291AJS) all within a few months of one another. The Special Newmarket Permanent Sedan was apparently intended for his daughter, Mary Eleanor Boalt, of Daytona Beach. Ms. Boalt subsequently married Alfred Thomas Gardner in 1936, and later Rolls-Royce records show chassis number 289AJS as the 'ex-Mrs. Gardiner sic car.'In 1939, ownership of this Rolls-Royce passed to the second owner, Dorothy Tuckerman, who apparently received it as a college graduation gift. Mrs. Tuckerman was followed in 1941 by James N. Lambert of Grand Isle, Vermont; in 1948 by Arthur D. Osborne; and in 1955 by Andrew Darling of Minneapolis.
Chassis number 289AJS was restored early in his ownership and was shown twice in 1962, at the RROC meet in Dearborn, winning 2nd in Class, and at the Classic Car Club of America Grand Classic in Dearborn, winning 1st in Class.
Following Mr. Darling's passing, the Phantom II was sold after 40 years of ownership to California collector, John Mozart. It remained in Mr. Mozart collections for four years, and was purchased by Charles Howard, before returning to the United States in the hands of Mark J. Smith. Orin Smith (no relation) purchased the car in 2010.The car was treated to a restoration and made its post-restoration debut at the 2015 Pebble Beach Concours d'Elegance, where it was awarded Best in Class.
By Daniel Vaughan | May 2017 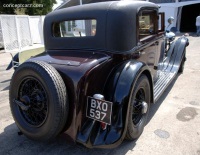