Sold for $7,975,000 at 2015 RM Sotheby's : Monterey.
In 1950, The Prancing Horse was still a relatively new stable, and yet, the automaker was quickly earning a reputation for performance and excellence, and success. Scuderia Ferrari would feature innovative designs and power. One of the best expressions of this dedication to performance would come in 1950 with the 275S Barchetta. Only two examples of the 275S Barchetta would ever be produced. They wore sport bodies fashioned by Milan's Carrozzeria Touring and those bodies would be designed around the new 3.3-liter Lampredi V-12. These new barchettas were meant for racing and their baptism of fire would come with the Mille Miglia.In spite of the performance and the promise, both cars would fail to complete the thousand-mile race. Still, the 275S represented the future for Ferrari and the two cars would quickly return to Maranello to have their engines tuned and upgraded. This time, the 4.1-liter V-12 would be placed inside. Producing 220bhp, the 340 America V-12 would actually be derived from Ferrari's growing Formula One program.

Those two 275S Barchettas would now be known as 340 Americas. One of those two chassis would be 0030MT. It was the first of the two 275S models to carry the Lampredi engine and it would be driven by none other than Alberto Ascari in that first attempt at the Mille Miglia. Upon completion of its upgrade to the 340 America, 0030MT would be put on display as part of the 1950 Salon de l'Automobile held at Grand Palais in Paris.
The following year, the car would be purchased by Scuderia Marzotto. While Enzo's new 275S Barchettas would fall out of the 1950 Mille Miglia with axle troubles, a good friend, Giannino Marzotto would go on to win the race driving a Ferrari 195S Berlinetta. Being good friends, and successful on the track, Marzotto would be given Enzo's attention and blessing to buy one of the new cars. So, 0030MT would leave the factory to be driven under the banner of Scuderia Marzotto.
Over the next couple of years with Scuderia Marzotto, 0030MT would see limited success. Vittorio Marzotto and Zanuso would drive the car to a 2nd place in the Coppa della Toscana in 1951.Despite being driven by some of the great Italian drivers of the day, 0030MT would have a difficult competitive life suffering a number of retirements. However, this would do little to diminish the importance and pedigree.Following the Grand Prix of Bari, in which it would be driven by Giovanni Bracco, the 340 America would find itself undergoing a good deal of change. The car would be rebodied with a body styled by Scaglietti and then it would pass through a number of Italian owners until 1958.In 1958, Carroll Mills would purchase the Ferrari in return for a Maserati and some cash. He would turn around and have the car shipped to the United States and, eventually, Vermont where it would become a local legend.The car would remain with Mills for a number of years until a young neighbor boy, Peter Markowski, showed interest in the car. At the time, he was only 12 years old, but he knew what he wanted. It was that red Ferrari in Mills' barn. Through a series of agreements, work on some other cars in Mills' collection and $500 Markowski would get his Ferrari. He was just 15.
Peter would set to work getting the Ferrari into running shape. This would not be an easy maneuver, but thankfully, a part of the challenge would include keeping the Lampredi engine. A few more years would pass but Peter would get the car running.
He was only 21 years old and had a Ferrari. One thing was certain: the car wasn't about to sit in some garage. Peter would seemingly drive it everywhere. All over the country, to races, wherever he desired. And, over the period of some 40 years of owning the car he would figure he traveled well more than a 110,000 miles in the Ferrari.Markowski would drive the car coast-to-coast and would become quite adept at servicing the car. This would give birth to his own restoration shop some years later. Amazingly though, the car that had spawned his love for collectible automobiles would depart his ownership in 1999 becoming the property of William Jacobs of Joliet, Illinois.

A couple of years later, Jacobs would sell the car and it would end up in the hands of Michael Willms of Aachen, Germany. Willms would honor Enzo with the purchase for the first thing he would do with the car upon receiving it would be to travel to Brescia, Italy in order to take part in the 2005 Mille Miglia. Over the next few years, Willms would participate in a number of events with the 340 America including the Modena Motorsport Track Days held at the Nurburgring, the Shell Historic Ferrari Maserati Challenge World Finals and then a number of other events held at Spa-Francorchamps, Valencia and, of course, Monza.Being such an important part of Ferrari's sports car lineage it would be of little surprise when the German magazine Auto, Motor & Sport featured the car. Besides being featured in a publication, 0030MT would become a regular at the Mille Miglia competing in the event in 2006, 2007 and 2010. The 340 America would also take part in the 2008 Monaco Historic Grand Prix and would be a shoe-in for Ferrari Classiche certification. Nearly every possible exception would be made for the car when it came to its Ferrari Classiche certification. Though not complying with the normal process for criteria issuing, the simple fact of the car's competition history and place of importance within the history of the Scuderia made it undeniable for certification. Despite its hundreds of thousands of miles, 0030MT remains a remarkable example of Ferrari's early sports car racers. The first and unique in so many ways, the many miles only seem to add to the aura and mystique of this landmark automobile. Enjoyed for a number of years by its current owner, 0030MT has the opportunity to find another home and tell tales of Ferrari glory from its very beginnings.One of just nine works-entered barchettas entered by Ferrari throughout the 1950s, the first Lampredi Ferrari sports car, driven by such greats as Ascari, Bracco and the Marzotto brothers and the display car from the 1950 Salon de l'Automobile, it would be very difficult to find another car with the achievements and pedigree of 0030MT, even with more success on the track.Offered as part of RM Sotheby's 2015 Monterey auction, the 1950 Ferrari 275S/340 America Barchetta would be just one of a number of highlights. However, there would be no denying that when this car crosses the block the seats will be full and the excitement levels extremely high. This excitement would be reflected in pre-auction estimates. Ranging from between $7,500,000 and $10,000,000 the 1950 Ferrari would appear poised for another remarkable moment of glory.By Jeremy McMullen

Ferrari 275S/340 Americas That Failed To Sell At Auction 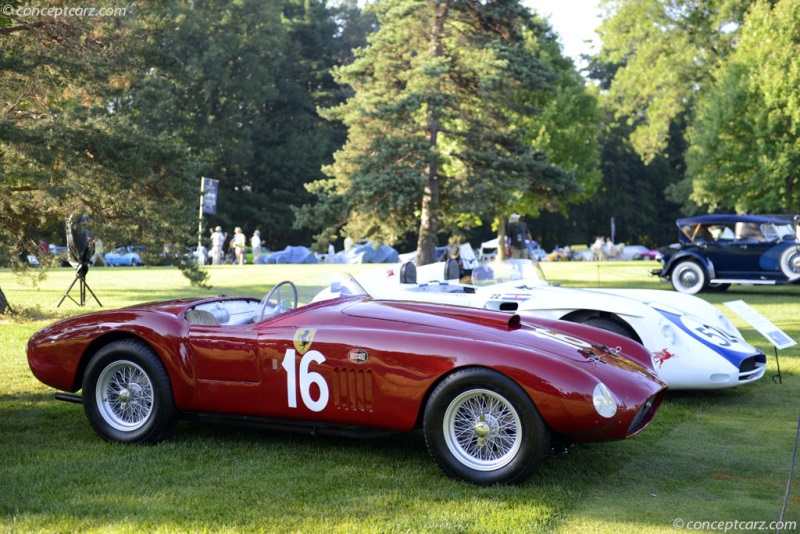