W.O. Bentley arrived at British automaker Lagonda in 1933 and began work on achieving the full potential of the firm's existing 4.5-liter, six-cylinder Meadows-engined cars. In 1935, he achieved an unprecedented 1st, 2nd and 3rd clean sweep at Le Mans. His masterpiece was a new 4.5-liter V12 that was composed of chromidium, duralumin, steel, aluminum, and phosphor-bronze. The new engine made its debut near the close of 1937 and fitted into a chassis that featured independent front suspension and four-wheel hydraulic brakes. The Lagonda V-12 proved its capabilities by capturing 1st and 2nd in class at Le Mans.This Lagonda V-12 Drophead Coupe was originally finished in Valspar Jewelescent Grey with Grey trim and delivered to its original showroom on December 7, 1938. A factory guarantee was issued on March 3, 1939, marking the original date of sale to R.S. Loewenstein, of Pinfold Stables in Leicestershire, who registered the car as FLM 700.
After seeing little use, the car was laid up in 1940 due to World War II. On June 14, 1946 it was acquired by the second owner Ron Galway, of Berkeley Square, London. On August 7th of that year it was serviced and its mileage was recorded as 7,329 miles at the time.
It was offered for sale in the February 1956 edition of Motor Sport magazine where it was advertised for sale by Performance Cars, of Brentford. It was apparently exported stateside not long afterward, and in November 1958, it was acquired by William J. Hodges, of Los Angeles. Mr. Hodges retained the car for nearly 3 decades. He sold his prized automobile in May of 1988, selling it to the current East Coast owner. The current owner had the car rebuilt mechanically. The bodywork was stripped to bare metal and properly refinished in British Racing Green. The car has seldom been shown; it has been in the care of two long term owners; it has been well kept but not over-restored.
By Daniel Vaughan | Sep 2015

1939 Lagonda V12's that have appeared at auction but did not sell. 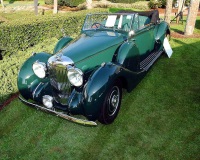 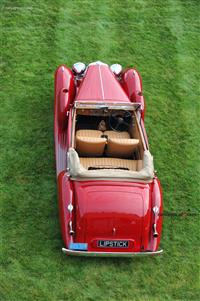