Sold for $225,500 at 2014 Bonhams Quail Lodge Auction.
While the Phantom I inherited its underpinnings from the Silver Ghost, the Phantom II, launched in 1929, employed an entirely new chassis, wîth semi-elliptic rear springs replacing the cantilever springing of the Ghost and Phantom I. The new low-slung frame, wîth its radiator set well back, enabled coachbuilders to clothe the new car in a more modern style, often creating sleeker designs rather than the more upright ones of the past. They were built in two wheelbase lengths - 144 and 150-inch.

The combustion chambers of the engine were redesigned and the head was now of the cross-flow type, with inlet and exhaust manifolds on opposite sides. The result was enhanced performance, particularly for the Continental model, and the ability to accommodate heavier coachwork.

Rolls-Royce produced 1,767 examples of the Phantom II during the model's five year production lifespan. Only one example was ever fitted with All-Weather Tourer coachwork by Hooper & Co. It was ordered new by Count P. Bon de Sousa Esq., who split time between Paris and London. The car was originally intended to be a saloon but was never commissioned as such and has maintained this All-Weather-Tourer body its entire life. It is a long-wheelbase example that was given the Continental specification motor. It was also give extra second plates to its Firths rear springs, and several other European features. The original owner specified chromium plating for the radiator and shutters, the Lucas P100 headlights, the mascot, and the windscreen wipers, but prior to delivery, some items ended up with matte nickel. 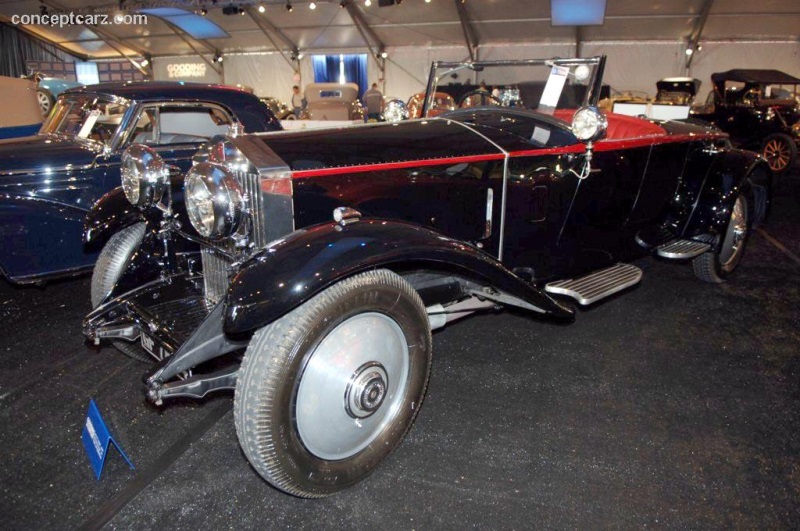 The car remained with Count de Sousa before selling it to E. Frith in Paris in September of 1930. Two years later, A.F.R. Wiggins, Esq. of Kent returned the car to the ÚK (in April of '32). Starting in 1931, it spent some time with L.L.B. Anges of London, followed by a Dr. W.L. Milligarr of Portsmouth who is believed to have acquired the car in the fall of 1946. The last two known English owners from the early 1950s were K. Hutchison of Surrey in June of 1951 and finally Eric Michlethwait of London the next year. Around that time, 143GN moved to California in the care of homeward bound G.I. From the 1950s until 1970, the history is not known. In 1970, it was found in Loleta, California, by Dr. Leon Garoyan who would become the car's longest term owner. It remained with Dr. Garoyan for more than a quarter century. In 1995, it was given a meticulous restoration. After the work was complete, the car was shown extensively (including a display-only appearance at Pebble Beach), and was the recipient of the Hooper Award from the Rolls-Royce Owners Club, along with many Most Elegant and Best in Class Concours awards.

1930 Rolls-Royce Phantom II's that have appeared at auction but did not sell.