Sold for $13,750,000 at 2015 RM Sotheby's : Monterey.
This McLaren is the second-to-last 'standard' F1 road car built. This supercar was completed in 1998 and delivered that year to its first high-profile owner. It was designated as a European-deliver example and finished in AMG Green Velvet with a two-tone cream and green interior. It was built over the summer of 1998 and delivered new on September 4th of 1998. Its first owner requested the car be kept at McLaren's facilities in Working. This car was fitted with the more powerful LM-specification engine. It was given parts derived from the GTR race cars to provide 680 horsepower. The compression ratio was increased, the cams were changed, different pistons were used, and airflow meters were swapped for air pressure sensors. This car was also given larger radiators which aided cooling, and a sports exhaust. This car is one of only two road going F1s to be fitted with an LM engine.The McLaren factory also gave this car the Extra High Downforce Package, which includes a revised nose with additional front wing vents and a more aggressive rear wing over the traditional High Downforce Package. Other modifications included a 4-millimeter Gurney flap, to aid the car's high-speed stability. Gas discharge headlights were fitted for improved visibility. A custom set of 18-inch multi-spoke wheels were fitted as well. Upon completion, the car was refinished in a brilliant orange metallic, a rarely seen color on F1s.
Inside, the upgrades continued, along with a number of modern amenities. It was updated to GT specifications and re-trimmed in magnolia leather and alcantara, with beige alcantara inserts in the seats. Many additional updates followed, including to the air-conditioning system and stereo along with the addition of a Phillips satellite navigation system, as well as a helicopter-grade car-to-car radio and intercom system. The intercom system allowed occupants to easily communicate with each other. There is a large 14-inch steering wheel, an LM-style handbrake, an LM-style instrument cluster with a shift light, and tinted side windows. The number '073' was also etched into the tachometer.
The car was then signed by Gordon Murray in front of the ignition switch on the transmission tunnel. McLaren offered just five examples of the LM-Specification for sale to customers. An additional prototype was retained by the company.This car was sold by its first owner in 2003 to a collector in Florida, where it has resided ever since. Since its acquisition by its current caretaker, it has accumulated just 700 kilometers, meaning the engine has under 6,000 kilometers since new. This car has its original gold-plated titanium Facom tool roll, a Facom mechanic's roll-around tool chest with a torque wrench, luggage, and its original owner's and service manuals.
By Daniel Vaughan | Sep 2015

Recent Sales of the McLaren F1

McLaren F1s That Failed To Sell At Auction

1998 McLaren F1's that have appeared at auction but did not sell. 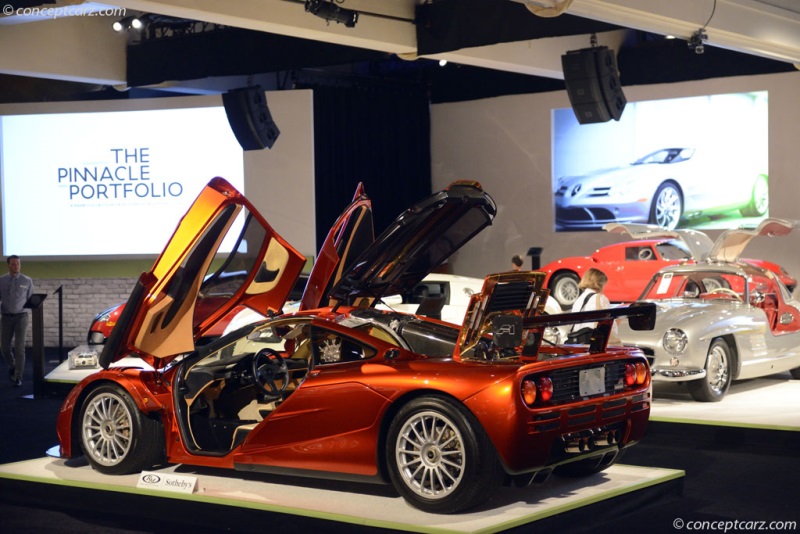