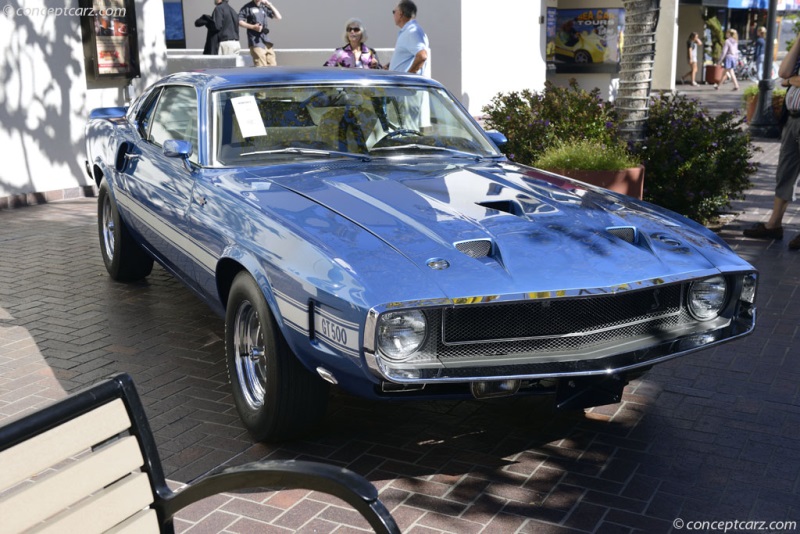 Coupe
Chassis #: 9F02R481634
Sold for $137,500 at 2015 RM Sotheby's : Monterey.
The Shelby GT500 was introduced in 1967 and came equipped with a 428 cubic-inch V8 fitted with twin Holley four-barrel carburetors and delivering 360 horsepower. Unlike the GT350, the GT500 was offered in both coupe and convertible body styles. 1969 was the final production year for the GT500, even though some late 1969 models were sold as 1970s. That model year also saw the introduction of a restyled Mustang, and the GT500 received all the same changes. The styling was more aggressive and the overall footprint increased. This particular 19969 GT500 is one of 1,536 Sportsroof models built that year. The car was delivered new to Borgman Ford Sales, of Michigan, in April 1969. It was sold in August of that year to its original owner, Donald Hayes, of Muskegon. During its first year, it is believed to have received a factory replacement engine. It was later purchased in 1985 by David DeHamer, also of Michigan, who owned it at least through 1994.
The car later received a concours-level restoration.
The car is finished in Acapulco Blue with white body stripes. It is reported to be one of 210 GT500 Sportsroofs originally finished in this color. It has a white interior, an automatic gear selector, pushbutton radio, and folding rear seat. It has power steering, power brakes, rear window slats, Shelby five-spoke alloy wheels with Goodyear Polyglas GT tires, and a space-saver spare tire mounted in the trunk. The Cobra Jet 428 big block engine produces 435 horsepower and is mounted to a three-speed Ford CC6 automatic transmission.
By Daniel Vaughan | Oct 2015

1969 Shelby Mustang GT500's that have appeared at auction but did not sell.