For more than three decades, the Pierce-Arrow Motor Car Co. of Buffalo, New York, was one of the most respected and renowned automakers in America. Heintz, Pierce, and Munschauer was founded in Buffalo, New York, in 1865. In addition to bird cages, the company produced ice boxes and other household items. In 1872, Pierce bought controlling interest in the firm and reorganized it as the George N. Pierce Co., adding bicycles in 1896. Like many others, the lure of the automobile was far too tempting and a steam car was completed in the summer of 1900. David Fergusson joined Pierce in early 1901 and the company had its chief engineer for the next two decades. Manufacture of the one-cylinder Motorette began in late 1901. By the end of 1902, 150 were produced; another 250 in 1903.

The company was among the most successful early proponents of the six-cylinder engine, a pioneer in power brakes, and was associated with some remarkable early experiments in light alloy construction, streamlined bodywork and power steering.

Pierce-Arrow really hits its stride during the second decade of the 20th century. Pierce was an innovative manufacturer, offering features such as aluminum bodies, dual valve engines and power brakes. This roadster sports the fender headlamp, a trademark design feature that began in 1913. 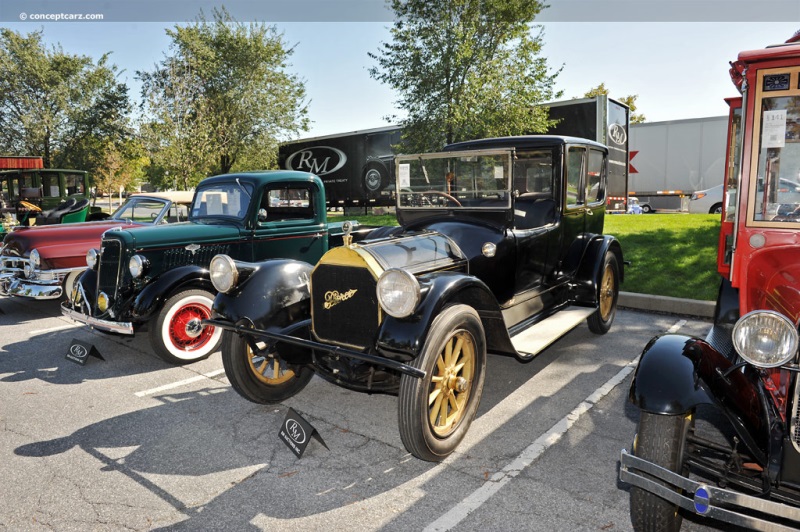 On the aesthetics side, there was the patented Pierce-Arrow fender treatment. Designed by Herbert Dawley, the distinctive headlamp-in-fender design endured for the remainder of Pierce-Arrow's existence.

This 38 horsepower 6-cylinder runabout was donated to the AACA Museum in 2003 by the late-Henry E. Becker adnd Pauline S. Becker, who extensively toured with on many AACA tours, Glidden Tours and other events.

Pierce-Arrow ended production in 1938, a victim of the depression and changing tastes. The company manufactured approximately 85,000 cars; there are less than 2,000 documented survivors.Source - AACA
No auction information available for this vehicle at this time.

1917 Pierce-Arrow Model 38's that have appeared at auction but did not sell.