This hand-built Alfa Romeo was designed for and displayed at the 1960 World Auto Show in Turin, Italy. Alfa made a few special chassis (AR 10202.02) and shipped them to various Italian coachbuilders. In an attempt to secure a production contract with Alfa, Carrozzoria Vignale designed and built this car for the auto show.

The car was purchased by a US Air Force officer and made its way to the USA. In the late 70s, the car was in Tampa, Florida, where it stayed until 1990. Research revealed that it was a 'prototype' for Alfa Romeo. Found in derelict condition, but rather complete, it required a lot of time and attention to restore to its present condition.

A piece of Vignale automotive history was almost lost to a Florida swamp. Five years of hard work resulted in a unique piece of art that is also great to drive.

This 1960 Alfa Romeo Coupe was purchased by its current owner in 1990. The chassis is similar to the old cast iron two litre roadsters, but the body was designed by Michelotti and fabricated by a carrozzorie (coach builder) in Turino, Italy, called 'Vignale.'

In the late fifties and early sixties, Alfa Romeo and their usual coach builders (Bertone, Touring, and Pinin Farina) could hardly keep up with the world wide demand for their automobiles; therefore, smaller coach builders like Vignale, Ghia, etc., would purchase chassis from Alfa Romeo, then have their own designers and fabricators put together the body and interior.

Very early in 1960, Alfa Romeo built 47 special chassis (AR102.02 series) for these specialty companies. According to the Alfa archives, chassis AR102.02.0001 was sold to Ghia, but most of the other chassis were sold to Vignale. These chassis were designed for Coupe bodies, as the structural framework is a bit different from the Roadsters (102.04 series) or the Sprints (102.01 series). 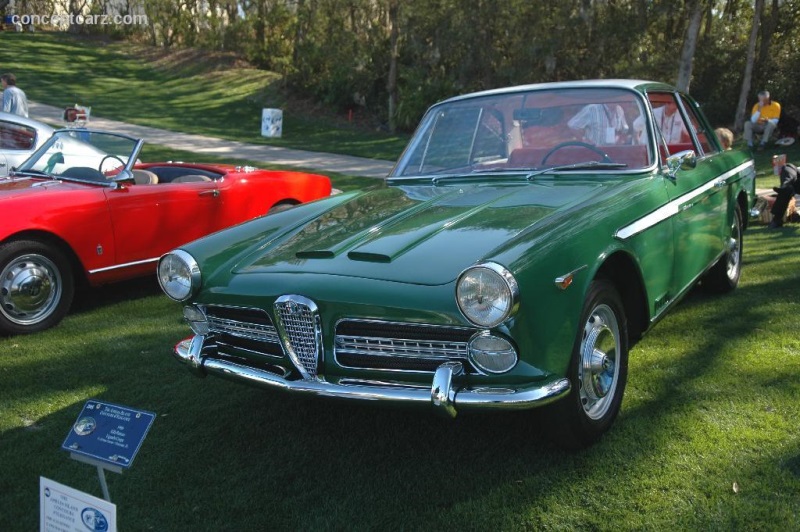 The Alfa project taken on by the current owner (#AR102.02.0019) was commissioned by an Anthony Wilson (possibly a ÚSA officer stationed in Italy) in March of 1960 and completed in September of the same year, just in time for the Turino World Auto Show. By the late sixties, it showed up in Miami, Florida, where it underwent a paint color change to silver and an interior change from red to black. The owner knew it was a rare Alfa when he first saw it in 1978. It belonged to Doug Harmon who lived in Tampa, Florida, at the time. it was not until 1990 that he was able to purchase the Vignale, and he was not prepared for what was involved with the total restoration of such a vehicle.

Over the years, he has partially restored a couple of cast iron 2000 roadsters and have accumulated a number of spare parts as well as having acquired a considerable knowledge about this unique series. One of the things that was noticed upon disassembly of the Vignale, is that many of the components, such as the bumpers, chrome trim, seat frames, dashboard, etc., had the chassis number stamped into the part. In this era (1960's) even massed produced components were often custom fit to the body, but on this series, each design component was unique to that chassis number. Items like the hood and trunk were fabricated from light alloy aluminum and the inside of the bumpers still show all the hammer marks and beads of welding left from the hand fabrication process.

Because of the above process, there are no spare body and trim parts available; therefore, if a part is beyond repair, it must be fabricated as close to the original as possible. This car now possess its original colors, Italian green paint with white trim, and lipstick red leather and Wilton wool carpets.Source - Delmas Greene

Vignale's Showpiece for Alfa Romeo
Alfredo Vignale and his craftsmen started handbuilding custom bodies on the chassis of various manufacturers in a small shop in Torino, Italy. Most of his early customers were individuals, but his business quickly grew as companies such as Ferrari, Fiat and Lancia became clients.Alfredo's designer, Michelotti, had created designs for customers on an Alfa Romeo chassis, and he wanted to get some business directly with Alfa Romeo to finance a new production facility, so it was decided to get Alfa Romeo's attention by building a special vehicle for the 1960 World Auto Show in Torino.The car displayed here is the vehicle designed by Michelotti, built by the craftsman at Vignale, and then exhibited at the Torino auto show. The striking color combination of green and white paint with red leather interior is assumed to represent the Italian flag and generate even more interest at the show. Unfortunately, Vignale did not get the hoped-for contract with Alfa Romeo and this car remains a true one-of-a-kind.
After the Torino show, the car was purchased by an American military officer and shipped to Miami, Florida, where it ultimately ended up in derelict condition in a Florida swamp. The current owner rescued it in 1990 and then put in five years of research and hard labor to save this unique work of art.
No auction information available for this vehicle at this time.