Alfa Romeo first introduced its 6-cylinder 2500cc engine in 1935. Fortunately, prior to World War II, much of Alfa's activity had been moved from Portello, which was heavily damaged by Allied bombing, to the town of Orta. When hostilities ceased, the 6C 2500 was dusted off and limited production resumed. This beautiful coupe was built by the noted Milan firm of Touring. Over the past few years, it has won Class Awards at Pebble Beach, Amelia Island, Meadowbrook and at the Alfa Romeo Owners Club National Concours in 2007.Carrozzeria Touring was established in 1926 by Felice Bianchi Anderzoni. In 1937, after years of evolving aerodynamics, Touring developed 'superleggera' (superlight) construction, a system of spaceframe tubes covered in aluminum which led to overwhelming racing success by Alfa, Fiat, Ferrari, and Lancia. Although not a craftsman, Anderzoni was Touring's greatest influence on design.Touring continued in operation until 1967 when it fell victim to Italy's labor unrest and closed down.
The 6C 2500 was produced from 1939, slowed during the war, and then continued from 1946 through 1953. It was a popular model with celebrities and examples were owned by Ali Kahn, Rita Haywood, Dick Powell and, more recently, Eric Clapton.
Photos of the car shown have appeared in two definitive books: 'Touring' and 'The 6C 2500 Histories.' Only 60 cars were built with this car's body style.

The Alfa Romeo 6C 2500 was among the first Italian sports car to go into production after World War II. In 1946, Alfa's Portello factory, especially its foundry, was nothing more than rubble. Alfa had moved its huge inventory of cars and parts to a cave north of Milan. Later the horde of parts was rescued. Three single-carburetor Sport models were assembled in 1945 and the number of cars for 1946 soared to 162. In the following year 281 6Cs were built, 71 of which were Super Sports. Thus, a majority of the parts in those 1947 cars are actually pre-war, and ex-cave.Most Alfa Romeo 6C 2500SSs (total production 383) had only minor exterior embellishments. The 6C 2500 was still not a cheap car by any standard, though. Chassis were individually assembled by hand, and usually shipped off to the coach builder of the owner's choice, even though 'factory' bodies were available. The Super Sport version of the 2.5-liter engine develops 110 horsepower and is capable of 100 mph. Alfa was able to record some victories for the 6C 2500, but the description of the engine as being 'race-derived' is more hyperbole than fact.This 1948 Alfa Rome 6C 2500 SS Coupe was built as a show car for the 1949 Villa d'Este Concours d'Elegance in Northern Italy. The event witnessed a flat contradiction between the opinions of the panel, which voted for another vehicle, but as a result of the referendum by which a far more intuitive public adjudged this 1948 Touring bodied Alfa Romeo 6C 2500 SS Coupe an absolute masterpiece. Following this event, the car was acclaimed as the 'Villa d'Este' and was shown at many other shows in Europe.

This particular car, chassis number 915717, a Super Sport, Touring, 3-window Coupe, is a fully restored automobile including the engine compartment, mechanicals and interior. The dash is complete with correct instruments, knobs and steering wheel, and leather interior. The Sport models were constructed as all steel hand-built bodies with the Pininfarina Super Sports were hand built steel with aluminum doors, hood and trunk and the Touring cars were hand built all-aluminum bodies on their patented 'Superleggera' (superlight) tube structure. The Amelia Island Concours was its first American concours participation.

Alfa Romeo 6C 2500s That Failed To Sell At Auction 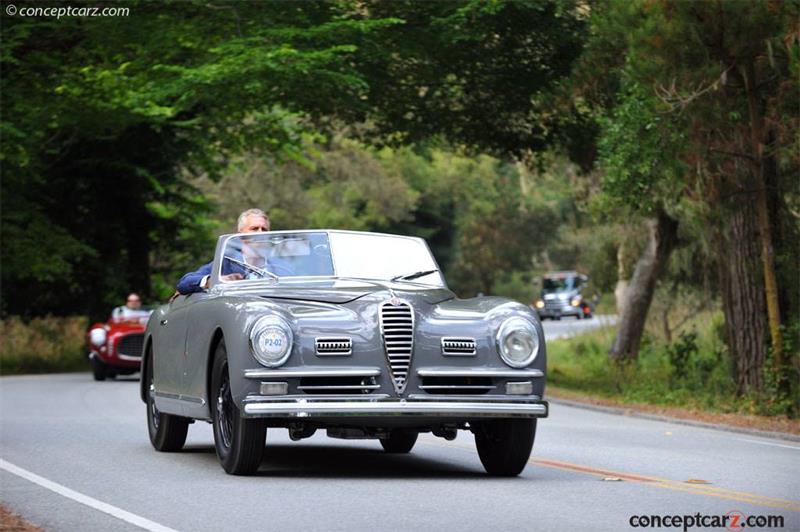