Sold for $112,200 at 2016 Bonhams : The Amelia Island Auction.
Sold for $148,500 at 2017 Gooding & Co. : Scottsdale, AZ.
Sold for $107,250 at 2021 Mecum : Monterey.
Alejandro De Tomaso commissioned Lamborghini designer Gianpaolo Dallara to produce the chassis for his new mid-engined supercar, the Pantera. The Pantera was given unitary construction for the steel chassis/body, and powered by a Ford 351 CID Cleveland V8 engine (depending on the destination market). The styling was handled by Tom Tjaarda at Carrozzeria Ghia and with construction handled by Vignale -both companies being part of DeTomaso's empire in the early 1970s. DeTomaso had a long-standing relationship with the Ford Motor Company which allowed the Pantera to be distributed through select Lincoln-Mercury dealerships in the USA. For 1972, in order to comply with stricter emissions regulations, the DeTomaso received a lower compression, 248 horsepower Cleveland motor. The 'L' model of 1972 also received 'impact resistant' bumpers and improved cooling and air conditioning systems. In 1974, the GTS models were given flared wheel arches and in European trim, came with a 350 horsepower engine, larger wheels/tires and other performance enhancements. Introduced at approximately the same time was the GT/4, a development of the Group 4 competition cars of 1972/73. In 1974, Ford and DeTomaso parted ways due to the energy crises. DeTomaso continued to sell the Pantera in Europe for many years; it was still around in the 1990s having undergone a series of upgrades. In 1980, the Pantera received its first major revision to its body, with the introduction of the GT5. It had a deep front air dam and delta-wing rear spoiler. The GTS5 was introduced in 1985, and incorporated further revisions to the bodywork and upgrades to its interior.
Bertone's Marcello Gandini, the stylist of Lamborghini's Miura and Countach, completely redesigned the Pantera in 1990, creating a virtually new model. Production of the Pantera continued until 1993.
This particular example is a Pre-L model that was built in July of 1971. It was delivered new to its selling dealer, Lee Douglass Lincoln-Mercury in Mechanicsburg, Pennsylvania on April 5th, 1972. It was soon sold to its first owner, a Mr. Leonard L. Seruka of Emmaus, PA on May 13th, 1972. It was later traded in to Pfeiffer Lincoln-Mercury in Grand Rapids, Michigan on August, 7th, 1980, showing a mere 9,199 miles from new. Its next owner was a Texas collector who had the car for a short time before selling it to the 3rd owner, Mr. Jim LaBar from Stuart, Florida. Mr. LaBar would retain the car for approximately 35 years; at some point in his ownership, the car was given a high-quality paint job. This Pantera is one of 87 examples ever made in the color of Lime Green (paint code #6) and is 1 of only 743 Pre-L models ever produced in 1971. The odometer currently shows 11,600 miles. The car is mostly original except for a few upgrades includign a Momo steering wheel, Holley carburetor, and factory GTS wheels.
By Daniel Vaughan | Apr 2016

1971 DeTomaso Pantera's that have appeared at auction but did not sell. 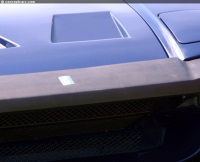