Sold for $17,160,000 at 2016 Gooding & Company : The Amelia Island Auction.
The high-performance 250 GT California Spider wore coachwork by Carrozzeria Scaglietti and was aimed at a very specific segment of Ferrari's American clientele: young, well-heeled enthusiasts who wanted a stylish, thoroughbred sports car that was suitable for both road and track. It featured a racy, swept-back windscreen, a lightweight folding top, competition-inspired bucket seats, and minimal interior appointments. Ferrari used a long-wheelbase chassis (LWB) for the earliest examples, which it shared with the 250 GT Tour de France Berlinetta and Series I Cabriolet. It was not until late 1959 that the California Spider was given disc brakes and tubular shock absorbers. Several examples were factory-equipped with competition features such as aluminum coachwork, high-lift camshafts, and long-range fuel tanks with outside fillers. In this guise, several California Spiders were able to achieve success in racing, including a 5th Place finish at Le Mans, a class win at Sebring, and many victories in SCCA B-production events.In 1960, with the introduction of short-wheelbase (SWB) Berlinetta, Ferrari thoroughly redesigned the California Spider. It was given a more sophisticated chassis, with standard four-wheel Dunlop disc brakes, a more refined suspension, and new outside-plug Tipo 168 and 168/61 engines. Scaglietti redesigned the California's coachwork, giving it a more aggressive and sporty persona, with curvaceous front fenders and muscular rear haunches. The interior was luxuriously trimmed with stitched leather, wool carpeting, and redesigned seats.
Several SWB examples were raced at major European events such as the 24 Hours of Le Mans and the Targa Florio.
Ferrari built 50 examples of the LWB version and 56 of the SWB variant. Production lasted from 1957 through 1963 with a total of 106 examples of the 250 GT California Spider produced. This particular example, chassis number 2871 GT, is a SWB California Spider. It has covered headlights which Scaglietti applied to just 37 examples. Originally finished in the classic color scheme of Rosso Cina (China Red) with black leather upholstery, this late-production SWB model was given a Tipo 168/61 engine with three Weber 40 DCL 6 carburetors, Abarth exhaust system, Veglia instruments, Miletto shock absorbers, and Borrani RW3591 wire wheels wearing Pirelli Cinturato tires.This car was completed on September 2, 1961, and was the 22nd SWB California Spider built. It was delivered new to Gianfranco Frattini, who paid Lire 5,500,000 for the new Ferrari. It remained in his care until June 1978, when it was sold to Terzo Dalia, a resident of Casalgrande in Emilia-Romagna. Sig. Dalia retained the car for seven years. During his ownership, it participated in two historic events hosted by the Automobile Club d'Italia in Modena – the Raid Ferrari d'Epoca in 1981 and Ferrari Days in 1983.In December of 1985, it entered the care of its current owner. The car is currently finished in red with black leather upholstery and equipped with desirable features such as a carburetor intake cold air box, SNAP exhaust extractors, and Borrani RW3801 wheels. It has not been fully restored from the ground up - instead, it has been maintained in good working order. It retains its original engine and rear end. It has an original tool roll (partially complete), the original steering wheel, shift knob, and front and rear bumpers.
By Daniel Vaughan | May 2016 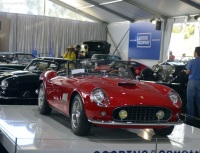