Eugene A. Casaroll was an American-Italian businessman who set up Dual Motors during World War II to build generators and trucks for the military. He also ran Automobile shippers, Inc., Chrysler's main car transporter. Smitten with the Firearrow IV concept car designed by Virgil Exner for Chrysler, he approached Dodge Division general manager William Newburg for permission to build the car. He was given the rights and Dodge provided the chassis for the project. Bodies were made in Turin, Italy and shipped back to Detroit where they were mounted to the chassis. Power was supplied by a dodge Red Ram Hemi V-8. The Hollywood elite included the Rat Pack of Dean Martin, Frank Sinatra, Peter Lawford, Sammy Davis Jr., and Joey Bishop - all owned dual Ghias. The car remained in production between 1956 and 1963. About 100 were built at a pricey $7646 each. One journalist wrote, 'A Rolls-Royce is a Hollywood status symbol for those who can't get a Dual Ghia.'This 1958 Dual Ghia 400 Prototype was the only example produced by Dual Motors, a Michigan based independent automobile manufacturer. Ghia, a coachbuilder based in Turin Italy, was commissioned to outfit the body of the car. It features a 400-hp 392 Chrysler 'hemi' V-8 powerplant and built on a 1957 Chrysler 300 chassis (unlike other Dual Ghias). It was based on a Gilda styling study. It is well equipped with air conditioning, Chrysler's hi-way hi-fi record player, and four bucket seats.
The car was purchased off the floor of the 1958 New York International Auto Show to Alex Freeman, who wouldn't take 'no' as an answer. He owned it until 1977 when it was sold to the current owners.
Interestingly, it was displayed again at the New York International Auto Show in 1977, where it continued to draw admirers.The car remains in near 100% original condition - only the leather top, which had dried out, has been replaced.
No auction information available for this vehicle at this time. 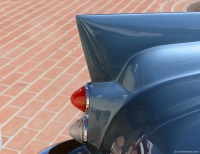 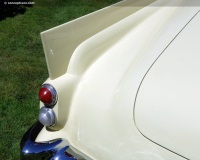