The Maserati Company was established in 1914. The Maserati brothers, Alfieri, Bindo, Carlo, Ettore, Ernesto and Mario, were all involved with automobiles from the beginning of the 20th century. Alfieri, Bindo and Ernesto built 2-litre Grand Prix cars for Diatto. In 1926, Diatto suspended the production of race cars, leading to the creation of the first Maserati and the founding of the Maserati marque. One of the first Maserati's, driven by Alfieri, won the 1926 Targa Florio. Maserati began making race cars with 4, 6, 8, and 16 cylinders. Mario, an artist, is believed to have devised the company's trident emblem, based on one of Bolgna's civic symbols: the statue of Neptune in one of the city's main squares. Alfieri Maserati died in 1932 but three other brothers, Bindo, Ernesto and Ettore, kept the firm going, building cars that won races.In 1937 the remaining Maserati brothers sold their shares in the company to Commendatore Adolfo Orsi, who in 1940 relocated the company headquarters to his hometown of Modena, where it remains to this day. In 1940 and 1941, a Maserati won the Indianapolis 500.The Maserati 3500 was produced from 1955 to 1966. Vignale was one of several coachbuilders used by Maserati, constructing both coupes and spiders from 1959 to 1966. The owner of this 3500 GTi purchased it in 1996, enjoyed driving it for many years, and restored it in 2005.
Maserati produced the 3500 in both coupe and spider models from 1957 to 1966. This GTi was built by the Italian coachbuilder, Carrozzeria Vignale, as a one-off show car to promote his design business at the 1965 Turin Auto Show. Shortly after, the car was purchased by an Italian gentleman, who had Vignale make changes to the car that included an interior and exterior color change.
In 1976, the 3500 GTi showed up in Cincinnati, Ohio, at the Kruse Auction and was purchased by its current owner. A few years later, when the car appeared in a Maserati publication, the owner realized the 3500 GTi was something special. In 2005, the car was restored to its present condition. The 3.5 twin-plug six-cylinder produced 230 horsepower with a top speed of 143 miles per hour.
No auction information available for this vehicle at this time. 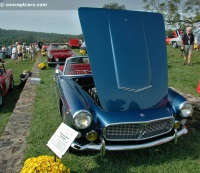