Sold for $7,705,000 at 2021 RM Sothebys : Monterey.
The world of motorsports is a constant evolution of design, ingenuity, and technology. Cooper transformed the scene when they showcased the potential of the mid-engine layout. From the late 1950s, the mid-engine layout was used by most single-seater and sports prototype racers. Ferrari began experimenting with rear-engine placement in its Formula 1 and sports-racing program. The company's first mid-engined sports racer was the 246 SP of 1961. It used a compact dual-overhead-cam V6 engine that was co-engineered by Vittorio Jano and credited to the late Dino Ferrari. The displacement was increased to 2.4-liters and placed into chassis numbers 0790 and 0796, which had purpose-built Type 561 chassis based on the 156F1 Grand Prix car. They would prove to be very competitive in competition and helped pave the way for further applications of the Dino engine.The SP name used was a departure from Ferrari tradition and did not denote individual cylinder displacement as in the V-12 models. Instead, the first two numbers were in reference to its total displacement while the third number represented the number of cylinders. Thus, the 246 SP example introduced in February of 1961 had a 2.4-liter V-6 engine.
The Ferrari 246 SP had a traditional tubular frame that was suspended in place by wishbones. It wore coachwork by Fantuzzi which featured a low-rise windscreen, curved rear fenders, and a sharp spoiler at the edge of the tail. In the front was a protruding nose featuring a twin-nostril grille, similar in design to that of the Ferrari 156 Ferrari F1 which Phil Hill drove in the World Championship in 1961.
The first two Ferrari 246 SPs proved to be competitive, although they often suffered from early retirements. Their list of accomplishments included a 1st overall finish at the Targa Florio and 3rd place at the Nurburgring 1000 KM. Two original 246 SP models were built. One example was completely destroyed in an accident and the other has a 2-liter engine and is now known as a 196 SP. The 246 SP models were followed by a line-up of smaller and larger versions of the Dino V-6, and an unusual V-8 (196 SP, 286 SP, and the 248 SP).This particular example, chassis number 0798, is the third of six SP examples built. The 2.4-liter V-8 engine ultimately proved to be underwhelming in competition, with the best performance being a 13th place finished by chassis number 0806 at the 12 Hours of Sebring in March of 1962. Ferrari increased the displacement to 2.6-liters, and four examples of this new Type 202 engine were reportedly produced, two of which were fitted into 0806 and 0798.0798 was used by Ferrari for testing at the Le Man's trials in April of 1962, where it was driven by Ricardo Rodriguez, Lorenzo Bandini, Mike Parkes, Olivier Gendebien, and Willy Mairesse.At LeMans in June, despite the extensive testing, 0798 retired prematurely due to clutch issues after 230 laps. The car had been driven by Giancarlo Baghetti and Ludovico Scarfotti.
The car was then sold to Luigi Chinetti for use by his North American Racing Team (NART). It was entered by NART at the Bahamas Speed Weeks in December of 1962. It finished 8th overall and 3rd in class at the Nassau Trophy Race, driven by Bandini. It raced at Sebring in March of 1963, where it was driven by John 'Buck' Fulp and Team Meister Brauser driver Harry Heuer to a 34th overall finish, and 8th in class. Bandini took over the driving duties at the Canadian Grand Prix in September, where it would retire early.
During this period, the car was sold to Buck Fulp, who continued to largely campaign the car under the NART banner. At the 1963 Bahamas Speed Weeks, the SP finished 5th overall and 2nd in class at the Governor's Trophy Race, and 11th overall with 2nd in class at the Nassau Trophy Race, both times driven by Fulp.Tim O'Brien of Patterson, New Jersey, purchased the car in January of 1964. O'Brien and his brother Jim raced the 268 SP frequently in East Coast SCCA events, finishing 2nd overall and 1st in class at Marlboro in April 1964, and 1st overall at Cumberland in May. At Bridgehampton in May, the car finished 1st overall. At Lime Rock, it placed 5th in August, followed by 2nd place in October, and another 1st overall a week later. Robert Hutchins of New York purchased the car in 1965 and continued to race the car, although with less success and several retirements over the course of 1965 and 1966. The car had two engine failures. Luigi Chinetti was retained to rebuild the original motor, and the car was eventually traded back to him in July.The car was put into storage at Chinetti's Greenwich, Connecticut facility until February of 1969, when it was sold to Pierre Bardinon of Aubusson, France. In the early 1970s, the car was sent to Fantuzzi for refurbishment, where the nose was restored to its original twin-nostril configuration. The competition exhaust was exchanged for the original split-pipe design.In 1996, after 27 years of ownership, the car was sold to its present owner.
By Daniel Vaughan | Oct 2016

Recent Sales of the Ferrari 268 SP

Ferrari 268 SPs That Failed To Sell At Auction 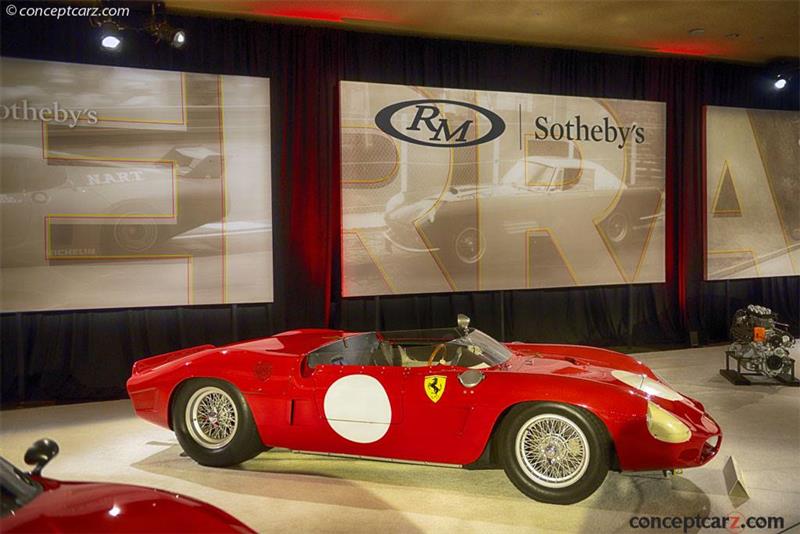