Sold for $5,225,000 at 2016 RM Sotheby's : Monterey.
This Ferrari 750 Monza Spider by Scaglietti, chassis number 0510 M, was originally owned by Allen Guiberson of Dallas, Texas. It left the factory finished in white with a dark blue triangle, stretching from the car's nose to its windshield, with a similar design on the tail. It would use this color scheme for the 1955 season.The first outing for this 750 Monza was at the 12 Hours of Sebring where it wore number 25 and was piloted by Phil Hill and Carroll Shelby. At the end of the race, it was initially crowned the overall winner at the end of the 12 hours. After a review of the lap charts, well after the race, the Jaguar was declared to be the winner. It had crossed the line just 25.4 seconds ahead of Guiberson's Ferrari. However, Hill and Shelby still managed to clinch the Index of Performance trophy.The next race was the Del Monte Trophy at the Pebble Beach road races in April where Phil Hill would drive it to a 1st place finish. The third and final event of the seas was on December 3rd at Palm Springs. Phil Hill drove it to a 2nd place finish. This was the final event for the car while under the care of Mr. Guiberson.
Richard 'Dick' Hall and his brother, Jim, were the car's next owner. The car would remain in the Hall family care for the next six decades.
The first event of the 1956 season was at Pebble Beach and chassis number 0510 M was driven by Carroll Shelby, repeating its overall victory from 1955. The next week, the car raced at Dodge City, Kansas, where it took first place again. Additional 1st place finishes would be earned at Eagle Mountain, Texas, with Carroll Shelby and Fort Sumner, New Mexico, that year. Fort Sumner would be the very first time that Jim Hall drove the Monza and his first win. During the Dodge City race, the engine picked up some debris on the track and was subsequently shipped to Maranello for servicing. Along with the engine work, the factory fitted the car with a door on the left-hand side and a full-width windscreen in order to comply with FIA Index C regulations. The car was refinished in red by the factory prior to being shipped back to Jim Hall, where it resumed racing.Prior to the 1957 season, Jim Hall purchased the car outright from his brother. The car raced in several sports car races, mainly in Hall's home state of Texas. Hall raced the Ferrari in at least one event in 1958, finishing 3rd overall and 2nd in class at the Mansfield Spring Sports Car Races in Louisiana.After the car's racing career was complete, the car was put into storage for nearly four decades. In the mid-1990s, Hall treated his 750 Monza to a restoration. The car was refinished in blue and white livery. Upon completion, the car made its restoration debut at the Monterey Historics in 1997 as part of a tribute to Carroll Shelby. It was shown at the 2005 Pebble Beach Concours d'Elegance as part of a special display of cars honoring Phil Hill and Stirling Moss. In 2011, it was shown as part of an exhibit honoring Phil Hill at the Petersen Automotive Museum in Los Angeles.Since then, the car has continued to be maintained and cared for in Jim Hall's care in his native Texas.
By Daniel Vaughan | Nov 2016

Sold for $5,225,000 at 2016 RM Sotheby's : Monterey.
Though Ferrari had built a reputation around its V12 engine, Enzo Ferrari was aware of the success of other manufacturers using smaller engines. He tasked his chief engineer Aurelio Lampredi with building such an engine. Lampredi designed a new four cylinder DOHC all-alloy engine that had better low-end torque and provided more acceleration and improved handling. In its first race in late 1953, the 12 Hours of Casablanca, a 500 Mondial finished first in class and second overall and played an integral role in Ferrari winning its second World Sports Car Championship in 1954.The list of characters that have raced this Ferrari reads like an all-star cast: Cobra creator and Le Mans winner Carroll Shelby, Formula One World Drivers' Champion and three-time 24 Hours of Le Mans winner Phil Hill and Chaparral creator Jim Hall have all raced this Monza Spyder.In its first race, in March 1955, Phil Hill and Carroll Shelby drove the car at the Sebring 12 Hours race and were declared the winners before having to concede victory on a technicality to Briggs Cunningham's D-Type Jaguar. Scoring confusion awarded victory to the Hill/Shelby Monza that fought a day-long battle with the Cunningham-entered D-Type Jaguar of Grand Prix star Mike Hawthorn and the 1954 Sebring winner American Phil Walters. Upon review, the decision was reversed based on a lap-count error and the Jaguar was awarded the victory. Hill and Monza got revenge a month later at the Pebble Beach Road Races by winning the Del Monte Trophy for cars over 1500 ccs by more than one lap.
The car changed drivers in 1956 when Carroll Shelby took it over, winning the Pebble Beach races again as well as other events in California. Jim Hall raced the car for the 1957 season and was just as successful as his predecessors. Hall owned the car until 2016 when its current owner acquired it. This historic American-raced Ferrari has just finished a complete, two-year mechanical and cosmetic restoration and was shown at the 2019 Pebble Beach Concours just as it looked when it won there at Pebble Beach, not once, but twice.

1955 Ferrari 750 Monza's that have appeared at auction but did not sell. 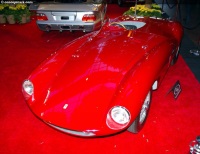