Sold for $275,000 at 2017 Gooding & Company : Amelia Island.
The Ford GT40, created after a failed takeover attempt of Enzo Ferrari's company, went on to become one of the most successful American race cars of all time. It dominated the 24 Hours of Le Mans, taking a 1-2-3 finish in 1966, and subsequent victories in 1967, 1968, and 1969.To celebrate the company's centennial, Ford introduced a GT supercar concept in 2002 which paid homage to its GT40 predecessor. It wore a design by Camilo Pardo, who worked under Ford's Chief Creative Officer, J. Mays, and with input from Carroll Shelby. It had design cues from the car that came before it, and although it was outwardly similar to the GT40, the supercar concept would be equipped with the most advanced technologies available to Ford at the time.It had an aluminum space-frame chassis, and wore lightweight composite and aluminum body panels. Power was from a hand-built 5.4-liter supercharged engine offering 550 horsepower, and mated to a six-speed transaxle. A zero-to-sixty mph sprint took just 3.5 seconds and had a top speed of 205 mph. It was given a motorsport-derived suspension and braking system.
This 2006 Ford GT is finished in Tungsten Gray Metallic, one of the lowest-production colors offered, with an Ebony leather interior. It is a three-owner car that is equipped with all four factory options that could be ordered: BBS lightweight forged aluminum wheels, a McIntosh CD stereo system, color-matched Brembo brake calipers, and painted Le Mans-style body stripes.
The car was given to Chip Foose in 2013 by his wife as a birthday present. Mr. Foose quickly began personalizing the GT. He gave it orange stripe accents, lowered suspension, one-off aluminum wheels of his own design, a custom MagnaFlow performance exhaust system, and a revised rear bumper. After the updates, it was display by MagnaFlow at their SEMA booth in 2014. Currently, the GT has covered less than 1,450 miles.
By Daniel Vaughan | May 2017

2006 Ford GT's that have appeared at auction but did not sell. 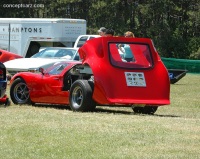