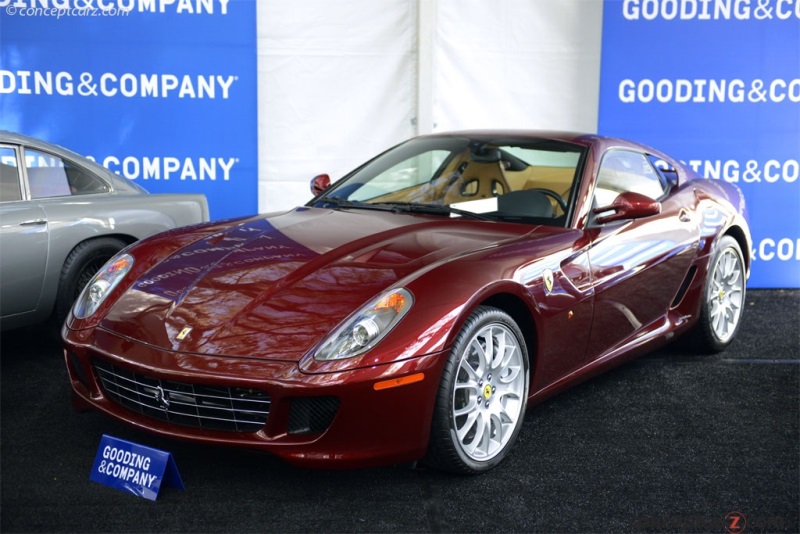 Coupe
Chassis #: ZFFFC60A770152365
Ferrari chose the 2006 Geneva Auto Show to unveil the Ferrari 599 GTB Fiorano. It was a replacement for the 575M and continued the company tradition of building front-engine V-12 sports and GT cars, which began with the original 166 MM Berlinetta. The 599 GTB Fiorano, which had an engine displacement size of 5,999cc, was given the company's most innovative advancements at the time, and brought F1 racing engineering and technology to the road. It wore a body designed by Pininfarina under the direction of Ferrari design director Frank Stephenson. It had prominent flying buttresses, a fastback profile, and near-perfect front-rear weight distribution. It was a lightweight vehicle with an aluminum monocoque chassis that was lighter and stiffer than the 575's. It employed the unequal-length double-wishbone suspension like its predecessor, with a Delphi-sourced semi-active suspension system. Utilizing magnetic fluid in the dampers that could change viscosity almost instantly, the suspension could be almost infinitely adjusted to suit road conditions and the driver's wishes.Power was supplied from a six-liter V-12 engine sourced from the Enzo supercar. With 612 horsepower, it was the most powerful series-production Ferrari road car of the time. Zero-to-sixty mph was accomplished in just 3.5 seconds and had a top speed of 205 mph.
The 599 was well-equipped with a wide variety of personalized options inside and out. Most examples were given the F1-style transmission, however a few enthusiasts opted for the traditional gated manual gearbox. The 599 GTB was the last Ferrari model to be offered with this classic arrangement.
This particular example, delivered new to Ferrari of Houston, Texas, is equipped with the six-speed manual transaxle. It was sold to its first owner, J. Friedkin, also of Houston.It is one of only 32 believed produced for worldwide consumption, and a mere 20 built for the US market. It is finished in Rosso Rubino over beige leather interior. Factory options include the carbon-ceramic brake system, aluminum painted calipers, 20-inch Monolithic wheels, electric Daytona-style seats, Scuderia shields, navigation system, rear parking sensors, as well as myriad interior customizations such as special-order piping and stitching, leather headliner, carbon fiber interior trim, and a rear shelf upholstered in leather with diamond stitching.When this car was sold new, it has an MSRP of $311,161.The second private owner acquired this car in March of 2011. In the care of its current owner, the car now shows just 333 original miles. It has a complete set of books, unopened tool kit, battery tender, keys, window sticker, and VIP build book.
By Daniel Vaughan | May 2017

2007 Ferrari 599 GTB's that have appeared at auction but did not sell.