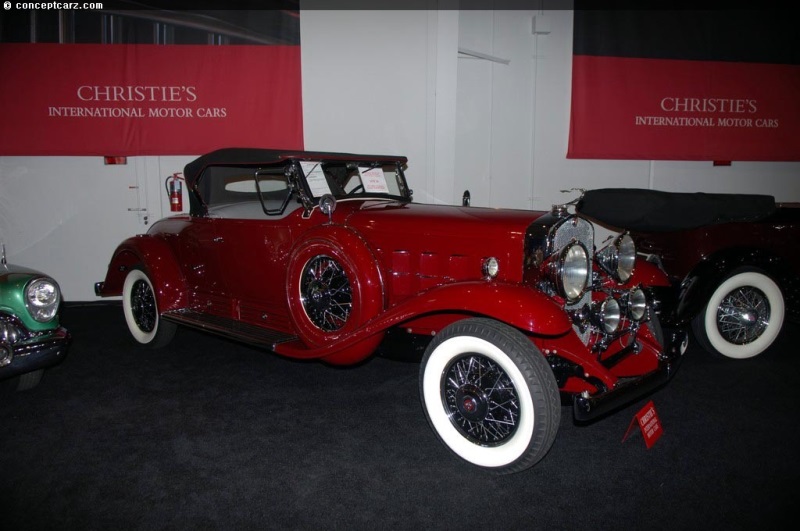 Roadster
Coachwork: Fleetwood
Chassis #: 702368
This 1931 Cadillac V-16 Roadster was offered for sale at the 2007 Christie's auction of 'Exceptional Motor Cars at the Monterey Jet Center.' It is finished in maroon with a black canvas top and gray leather interior. Power is from the overhead valve V16 engine that measures 452 cubic-inches and produces an impressive 175 horsepower. Four-wheel mechanical brakes can be found on all four wheels.As the cylinder wars of the early 1930s were in full force, along with the Great Depression, Cadillac led the pack with their powerful nearly introduced V12 and V16 engines. Marmon followed with its 16-cylinder engine, but it never achieved the volume success of Cadillac's. Cadillac's V16's were produced in limited numbers with less than 4,100 examples being created from 1930 through 1940. Most were created in the vehicles introductory year. The factory bodies were designed by Harley Earl who drew inspiration from the greatest marque's of the era with an emphasis on those from Europe. The bodies were created in-house at GM-owned Fleetwood and Fisher facilities. It is believed that Cadillac offered a very wide range of optional body configurations to its clients, reaching 60 different designs.
The Cadillac was catered to the social elite and wealthy individuals. They carried a very expensive sticker price, yet even at those prices, it is reported that Cadillac lost money on each one produced. The Fleetwood bodied roadster was the least expensive in the V16 catalog. A total of 105 examples were produced and each carried a sticker price of $5,000.
This vehicle has been treated to a total restoration that took four years to complete. Over $300,000 went into making this example one of the best and most original in existence. This car has Pilot Ray spotlights, and Tilt Ray headlamps and tail lamps. It is an AACA National First Prize winner in 2004.At auction, the car was estimated to sell for $250,000 - $350,000. Those estimates proved to be accurate as a new owner was found at the selling price of $275,000, including buyers premium.
By Daniel Vaughan | Oct 2007
No auction information available for this vehicle at this time.