Sold for $676,500 at 2017 Bonhams : Greenwich Concours.
The Bugatti Type 49 was introduced at the Paris Salon in 1930 and was produced until 1934 with a total of 470 examples produced. It is believed that around 76 examples remain in existence. This would be the last of Ettore Bugatti's eight-cylinder, single-camshaft touring cars. The 3.3-liter model featured twin-plug ignition, an enlarged radiator, ball-change gearlever, and eventually cast aluminum wheels. The Type 49 Bugatti's received quality coachwork from some of the finest and most distinguished coachbuilders of the era, as well as a variety of styles by the Molsheim factory.This particular example wears coachwork by Labourdette. The Labourdette coachbuilder has a distinguished history that began as a carriage builder, eventually switching to horseless carriages. Their name was associated with quality and craftsmanship. Early in their career they clothed Panhard-Levassors, C.G.V.s, Delaunay-Bellevilles, and Mors motorcars, through the teen era Mercedes, Peugeot and Rolls-Royce joined that roster, then came Bugatti, Hispano-Suiza and the 40 horsepower Renaults. During the 1930s they produced coachwork for Delage and Talbot. Their list of individual clients was equally impressive.
Some of their finest creations were their wooden bodied 'Skiffs.' They pioneered lightness in the design for open cars, followed by light designs for the 'Vutotal' bodies in the 1930s. They registered numerous patented features and accessories from seating arrangements to lamps.
This Bugatti Avant grade Roadster has a sweeping tapered tail design with aerodynamic experiments that Labourdette were pioneering. This example, which is believed to be unique, was ordered new through Parisian dealer Lamberjack in January of 1933. It is believed that it was commissioned for its first owner, Charles Drouilly at a cost of 15,000 French Francs. The car is a longer chassis variant which was necessary to accommodate the long coachwork. It is a two seater with a rumble/dickey seat with a sunken spare wheel behind this. It was given engine number L423, which is still installed in the engine bay. The eight-cylinder, 3257 cc unit is fitted with a single Schebler carburetor and offers 85 horsepower. There is a four-speed manual transmission and four-wheel drum brakes. It is not known how long Mr. Drouilly would own the car. As early as 1946, the Roadster had re-surfaced in the care of Roger Teillac, who owned a prominent garage in Paris. Its owner around this time was a M. Rengnez. The next owner is believed to have been Francois Lecorche. By this point in history, its scuttle vents and side door had been covered up. Around the 1970s, the car migrated to dealer/enthusiast Jacques du Montant.While in du Montant's care, the car was painted solid back from its previous yellow with black fenders. It left France for the first time in the early 1970s, and sent to the United Kingdom where it was photographed with two tone bodywork and painted side sweeps. From there it traveled to Japan and into the care of its next owner, residing with a Mr. Minuro Kawamoto for much of the next decade. It arrived in the United States in 1983 passing through a dealer to Robert Marceca in New York. Just one further ownership occurred before the current custodian acquired the Bugatti in 1995. During the past two decades, the Bugatti has been systematically refurbished. The work included an engine rebuild and trim work at Automotive Restorations in Stratford, paintwork by Blackhorse Garage in Bridgeport and the wiring and bodywork carried out by the Lefferts brothers' Vintage Auto Restorations in Ridgefield. The work was completed by the close of 2016.
By Daniel Vaughan | Jun 2017

Sold for $676,500 at 2017 Bonhams : Greenwich Concours.
The last of Ettore Bugatti's 8-cylinder, single camshaft touring cars, the Bugatti Type 49 debuted at the Paris Auto Salon in 1930. The 3.3-liter Type 49 can be identified by its larger radiator and cast aluminum 'finned' wheels. Total production amounted to 470 cars, and around 76 are believed to survive. The Type 49 was built in a wide variety of styles at Bugatti's Molsheim factory and by coachbuilders throughout Europe. This Type 49 Henri Labourdette Roadster was built by Henri Labourdette for its original owner, Charles Drouilly, an eccentric yachtsman who was the Commodore of the Motoryacht Club of the Cote d'Azur. This unique body has a suitably nautical theme reflected in the taper from the windshield to the tail reminiscent of a classic motorboat. This directive is apparent in the unusual treatment of the naturally finished mahogany strips running at the junction of the top and body side from windshield to the end of the body as well as matching mahogany on the dash and the footboard.The taper of the coachwork from the windshield to the tail also reflects a boat's contour as seen from both a side or top view further contributing to a boat-like appearance.
The Type 49's chassis is a perfect match for this theme offering light weight, considerable power and direct steering.
Drouilly sold his Bugatti around 1946 and it then spent many years in France before coming to the United States. Restored recently by its current owner, the 2019 Pebble Beach Concours d'Elegance was the first time it had been seen since the work was completed.

Recent Sales of the Bugatti Type 49

Bugatti Type 49s That Failed To Sell At Auction

1932 Bugatti Type 49's that have appeared at auction but did not sell. 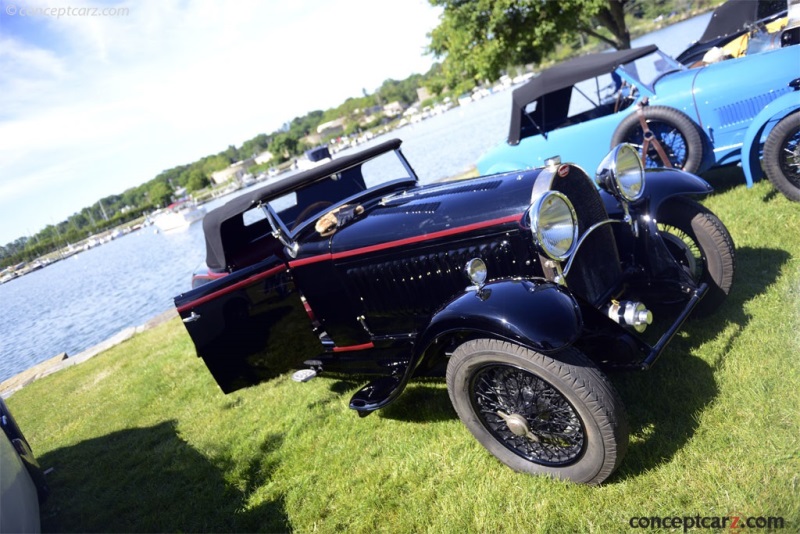 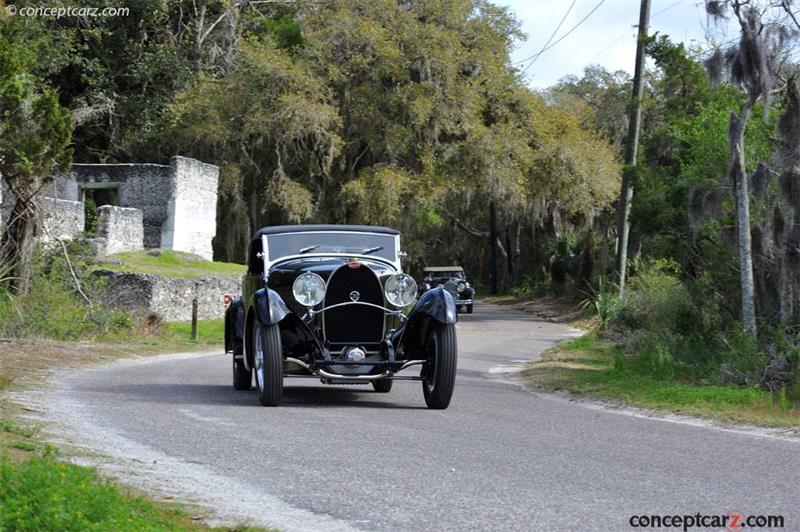