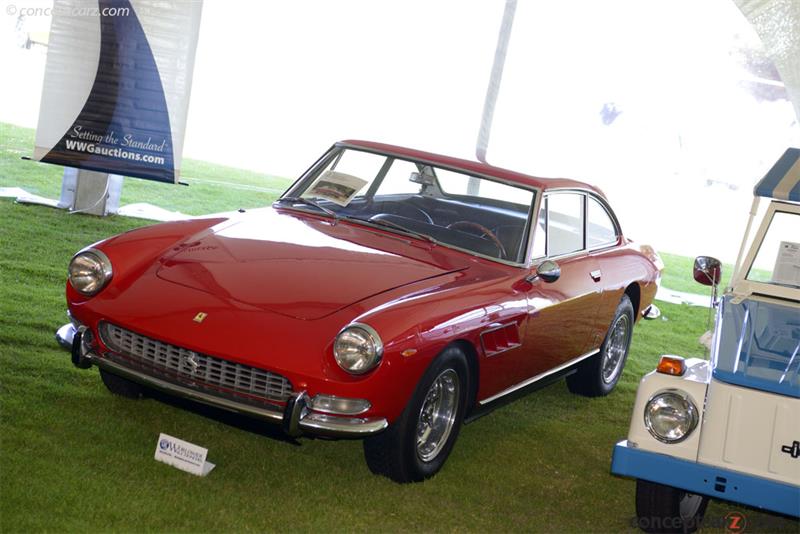 Coupe
Designer: Pininfarina
Chassis #: 8871
The Ferrari 330 GT 2+2 made its debut in 1963 and combined avant-grade Pininfarina styling with outstanding V-12 performance. It followed in the footsteps of the prior 250 GTE 2+2, with more performance, a 50-millimeter wheelbase extension, seating for up to four occupants, and higher standards for comfort. The Grand Touring Ferrari 330 GT 2+2 was powered by a Tipo 209 Colombo-derived V-12 engine, enlarged to 4.0 liters, and had a top speed exceeding 150 mph, making it the fastest road-ready Ferrari of the day. During its production lifespan, lasting from 1964 through 1967, just over a thousand examples were built along two distinct series.
This particular example is a 'Series II' and one of just 455 'two headlamp, five-speed' examples. It is an original left-hand drive, U.S. version, factory-equipped with amenities including power steering and power windows. It was completed during July 1966 and then delivered new to official East Coast Ferrari importer, Luigi Chinetti Motors in New York City. The first recorded owner was Stephen B. Potter. In 1976, it was sold to a new owner resident in Florida, who had a General Motors-type air-conditioning system and Motorola alternator installed. In April 1976, it was advertised at 32,500 miles and the next month, it was purchased by Herschel Abrams of Hallandale, Florida, who sold the Ferrari to Jerry Keifer of Cincinnati, Ohio, who had the car painted red and then sold it at 49,000 miles in July 1981 to William C. Cekal of Aurora, Colorado. Mr. Cekal would add 14,000 miles during his ownership, eventually selling the Ferrari in June 1984 to Alan G. Tyler of College Park, Maryland, who would resell the car the next month to its first true long-term keeper, Michael J. Belo, an attorney from Denver, Colorado.
Mr. Belo had the engine rebuilt in 2008 at 82,250 recorded miles. In January 2010, Mr. Belo had the engine work completed, the engine compartment touched up, a new period-correct Becker radio sourced from Germany and installed, and new Pirelli tires fitted. In mid-2012, Mr. Belo parted with his Ferrari after 28 years of ownership. The next owner acquired the Ferrari during September 2012 and applied a careful and consistent program of maintenance, with about $35,000 for the work, including rebuilt front seats with new leather covering, and attention to the clutch, charging, braking, air-conditioning, and underpinnings, plus installation of a new clock and speedometer, plus detailing of the engine compartment.
By Daniel Vaughan | Sep 2017