Sold for $682,000 at 2018 Worldwide Auctioneers : Hostetlers Hudson Auto Museum Auction.
Sold for $362,500 at 2020 RM Sothebys : The Elkhart Collection.
In the early post-WWII era, Hudson had beaten the Big Three to market with its Step-Down models and on NASCAR ovals. However, their fortunes and their image as an innovator began to degrade with the poorly received 1954 Jet. In response, Hudson's Chief Body Engineer Frank Spring suggested a rekindling of their racing prowess by introducing a lightweight, streamlined coupe. It was an attempt to 'win on Sunday, sell on Monday' and their new car was aimed at Mexico's Carrera Panamericana race, where Marshall Teague had just finished sixth overall in a Hudson Hornet. The new car was based on the Jet chassis and rendered in general concept by Art Kibiger and his Hudson design staff. In order to satisfy homologation requirements, at least 25 examples were required to be built. Unable to satisfy this small number of vehicles cost-effectively, the job was entrusted to Italy's Carrozzeria Touring. Touring received a complete Hudson Jet which they used to build the prototype. Its external bodywork was removed and a new lightweight aluminum body was fitted. Distinguishable features included inverted vee motifs derived from Hudson's emblem for the integrated grille guard and front bumper and the front brake-cooling air intakes atop the headlamps. Another set of brake-cooling ducts could be found just behind the doors. The rear, triple chrome tube fenders contained the taillights. It had a wraparound windshield and sloped side windows. The doors extended into the roof for easier entry and exit. It had the step-down footwells, with Touring designers lowering them even further to complement the low-roof design. The interior featured anatomically-shaped seats with two-piece backrests and air vents fed from a bladder within the seat cushion forcing cool air into the seatbacks. A rather rare feature of the time were the seat belts, which Spring insisted upon by Spring, an accomplished pilot. Spring also specified effective flow-through cabin ventilation.
Under the bonnet was a 202 cubic-inch inline 'six' sourced from the Jet. With Twin-H carburetion, the powerplant offered 114 horsepower and was sent to the rear wheels via Hudson's three-speed manual transmission.
25 knocked-down Jets were later shipped to Touring for bodywork. Redesignated 'Italia,' the Hudson made its debut at the December 1953 Detroit Auto Show, however it would not enter production until August of 1954, months after Hudson's with Nash-Kelvinator forming American Motors and shortly before the closure of Hudson's Detroit factories. This particular example is car Number 10. It has been restored and has had just three owners from new. It was originally sold on December 23rd of 1954 Lavigne Auto Sales in Warren, Michigan near Detroit to James M. Fisher of Grosse Pointe. It was sold for $4,989.51 plus taxes. After 44 years of ownership, Mr. Fisher sold the Italia during July of 1998 to Wayne, Michigan-based Hudson collector Charles Regnerus, who in turn sold the Italia to Mr. Ed Souers who commissioned a total professional restoration, freshly completed to factory-original, concours-quality standards.
By Daniel Vaughan | Oct 2017

Recent Sales of the Hudson Italia

Hudson Italias That Failed To Sell At Auction

1955 Hudson Italia's that have appeared at auction but did not sell. 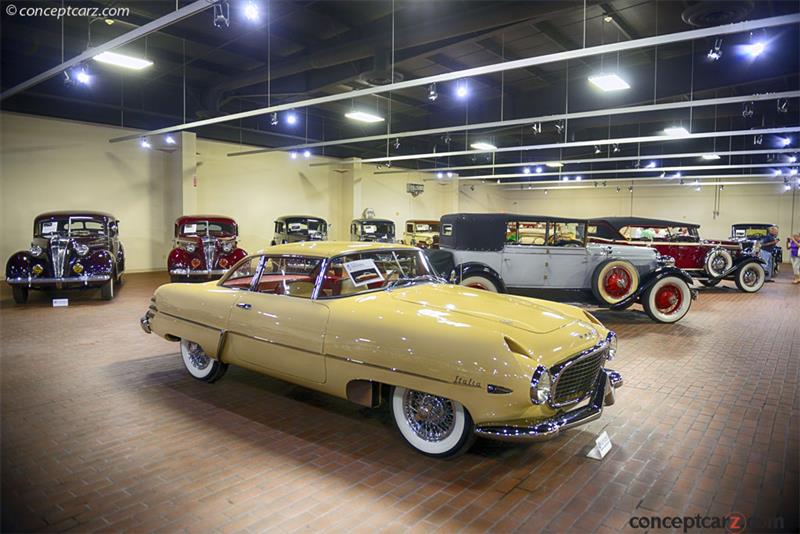