Sold for $929,500 at 2017 Bonhams : Quail Lodge.
It took Mercedes-Benz craftsman 6,000 man hours to build a single 540K. They used the finest machinery, the best tools, the most skilled craftsman, engineers, machinists, and assemblers to construct some of the finest motor cars ever built. The 540K was based on a strong and rigid chassis. They introduced coil spring four-wheel independent suspension using parallel wishbones at the front and swing axles at the rear. They featured synchromesh on the top three gears of their four-speed gearboxes, 12 volt electrical systems, central lubrication and vacuum-assisted hydraulic brakes. The engines featured a driver-controlled supercharger (in similar fashion to the S, SS, and SSK machines of the Twenties) that boosted engine output by about 60 percent in short full power bursts. The eight-cylinder engine displaced 5,401cc and had a bore of 88mm and a stroke of 111mm. Designer Hans Nibel and his successor, Hans-Gustav Röhr, had given it a long stroke and even-firing eight-cylinder layout to maximize smoothness and relaxed performance at low speeds and sustained rapid cruising. The driver automatically engaged the supercharger when the accelerator pedal was fully pressed to the floor, upping performance in bursts, bringing horsepower from 115 BHP to 180 BHP.The 540K was capable of cruising for extended periods at speeds approaching 90 miles per hour. With their superchargers engaged, the top speeds easily exceeded 105 miles per hour.
During the four year production lifespan of the 540K, Mercedes-Benz built fewer than 400 examples.
The Mercedes-Benz coachworks at Sindelfingen provided cabriolet offerings in six different configuration, designating each variant alphabetically. There were three separate four-door styles, the cabriolets D, E and F, which accommodated up to seven passengers. There were also three two-door cabriolets with seating anywhere from two to five people. The Cabriolet B and Cabriolet C had rear seating, the B with rear quarter windows while the C had blind quarters on the folding top. The Cabriolet A had blind rear quarters and accommodations behind the front seats only for the two occupants' luggage.Sindelfingen had started out as an aircraft production facility which employed as many as 5,600 people during The Great War. Production of civilian aircraft continued for a short time after the war but soon Sindelfingen was designated as Daimler's production facility for Mercedes bodies. After the merger with Benz in 1926, Sindelfingen's function expanded. New equipment was added, including huge 1,000 ton presses capable of forming steel sheets 200 x 150 cm in size. By the end of 1934 employment at Sindelfingen had returned to over 5,000. It built coachwork also for other manufacturers, constructing 20,000 bodies for BMW and many for Wanderer.Fifteen different trades were employed in building the wood-framed bodies constructed at Sindelfingen. Sindelfingen's supervisors worked constantly to streamline and refine the process to minimize handling and inventory. Costs were high and only the most skilled and dedicated craftsmen were utilized in production the fine coachwork. Beech and ash heartwood were used exclusively, naturally dried in huge sheds at the factory which held a year's supply of wood before sending each piece to one of the twelve drying kilns. Metal panels were stamped out on the giant presses, then individually fitted and welded together into subassemblies. Final assembly took place on a moving assembly line.While most coachwork built at the Mercedes-Benz karosserie at Sindelfingen was taken to the Mercedes-Benz factories at Untertürkheim or Mannheim to be installed on their chassis, the most exclusive vehicles, such as the 540Ks, were assembled at Sindelfingen where their assembly, finish and trimming could be perfected by the company's best workers. Production of the 540K ended in 1938 or 1939 but a few 540K chassis were held in reserve for later completion.This particular example was Commission Number 396152 on chassis number 408429. It was completed in 1941 and was one of the last 540Ks built. It was delivered to the Ministry of Foreign Affairs in Berlin on February 12, 1941.
In 1946, it was sold by Kurt Nitschky of Motoradhaus in Karlsruhe to Viktor Reuter. Three months later it sold to Severn Loyd of Jackson, Tennessee, then disappeared for twelve years until it was owned in 1958 by Thomas Brothers in Phoenix. In 1977 it was owned by William A. O'Brien III in Reno. William O'Brien sold it to T.J. Day on October 15, 1985 and Mr. Day began a comprehensive concours quality restoration that was completed in 1988.
In July of 1988, at the Farwest Grand Classic, it was judged Third in Class. This 540K is finished in red with chrome wire wheels, wide whitewall tires, dual exposed side-mounts with strap-on mirrors, dual spotlights, Bosch headlights and dip beam light, integrated trunk and dual taillights. The interior is upholstered in dove grey leather with grey carpets. There are tinted glass sun visors, an opening windshield and wood trim on the dashboard and around the windows.

1941 Mercedes-Benz 540K's that have appeared at auction but did not sell. 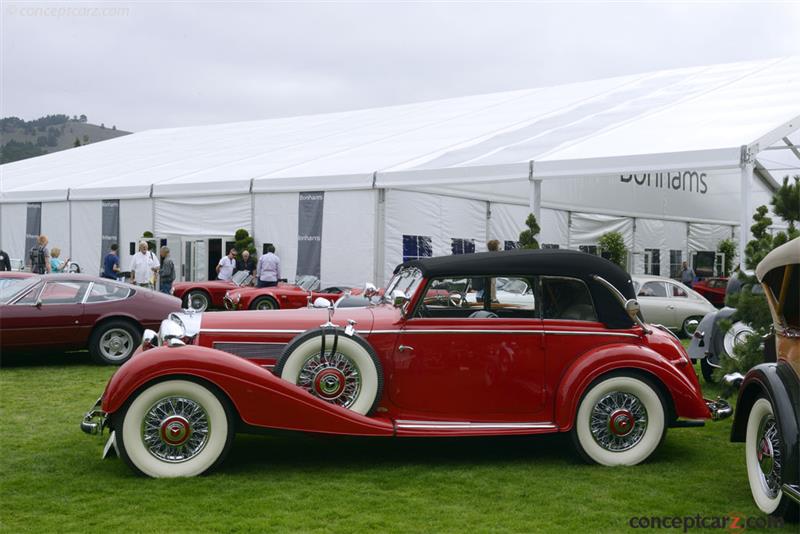 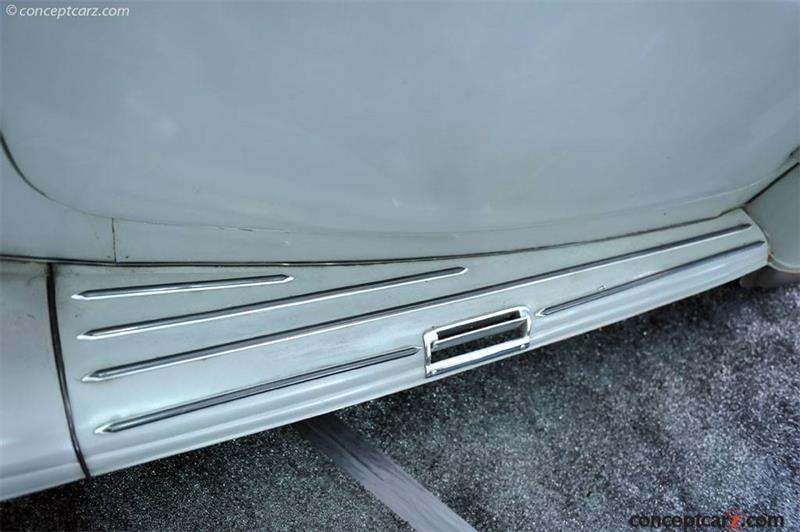