Sold for $352,000 at 2017 Bonhams : Quail Lodge.
Major Anthony 'Tony' Lago was an entrepreneur and an Italian engineer. After the Anglo-French STD (Sunbeam-Talbot-Darracq) collapsed during the worldwide depression in 1934, Talbot purchased the French brand of Automobiles Talbot and founded the marque Talbot-Lago. The British interests of Talbot were taken over by the Rootes Group and were now badged as Darracqs. In France, the cars still wore the Talbot badge which they had done since 1922. Racing and competition had always been a part of the marque, and in 1937 achieved victories in the French Grand Prix and the Tourist Trophy. Some examples achieved notable successes in the immediate pre-war and post-war years, including three Grand Prix victories for French Champion Louis Rosier.
The existing X-braced, independently front suspended chassis was retained for the first newly designed Talbot-Lago built cars introduced for 1935. Power was from a trio of new six-cylinder engines designed by ex-FIAT engineer Walter Becchia. The listed included a 2.7-liter 15CV, a 3.0-liter 17CV, and a 4.0-liter 23CV. The 4.0-liter unit featured inclined overhead valves set in hemispherical combustion chambers and opened by crossed pushrods. All engines were mated to a Wilson Pre-Select 4-speed transmission.
At the 1935 Season Paris Auto Show (held at the end of 1934), Talbot-Lago introduced the T120 and T150 Sport Cabriolet models. They wore coachwork designed by Figoni, which won the Coupe d'Excelence award at the 1935 Concours d'Elegance de l'Auto. Under agreement, the Figoni coachwork would be used the following year on Talbot factory-produced models.Approximate 40 examples of the Talbot-Lago T120 Sport Cabriolet were built with the Figoni design. Currently, just 5 examples are believed to have survived today. This example was given a restoration in 2005 and made its debut at The Quail. It has resided with its current custodian family since 1962. It is believed that this example was delivered new to Jacques Puget in the southern French coastal city of Marseille and first registered there on April 9, 1937. Within 2 years it transitioned to Maurice Martignon in that same town, on January 4, 1939. Mr. Martignon retained the car for over 22 years and protected it in storage during the war years.The present owner's father acquired the car in Marseille, France in August of 1962, and brought it home with him to Southern California. The car has been restored and the finished product was painted with a deep green hue exterior, a tan leather interior, and a new cloth top. The restoration's goal was to preserve originality and maintain detailed features.
The four years that followed its restoration, it was displayed at the Art Center School of Design Car Classic, as well as the Los Angeles, Huntingdon Beach, Newport Beach, Palos Verdes and Dana Point Concours d'Elegances, garnering awards including 2 First Places, 2 Second Places, a Third place, a Special award and the Holloway Memorial Trophy.
The car is powered by an overhead valve six-cylinder engine displacing 2,996cc and fitted with a single Zenith- Stromberg carburetor. There is a four-speed Wilson Pre-Select gearbox and four-wheel drum brakes.
By Daniel Vaughan | Oct 2017

Recent Sales of the Talbot-Lago T120

Talbot-Lago T120s That Failed To Sell At Auction

1936 Talbot-Lago T120's that have appeared at auction but did not sell. 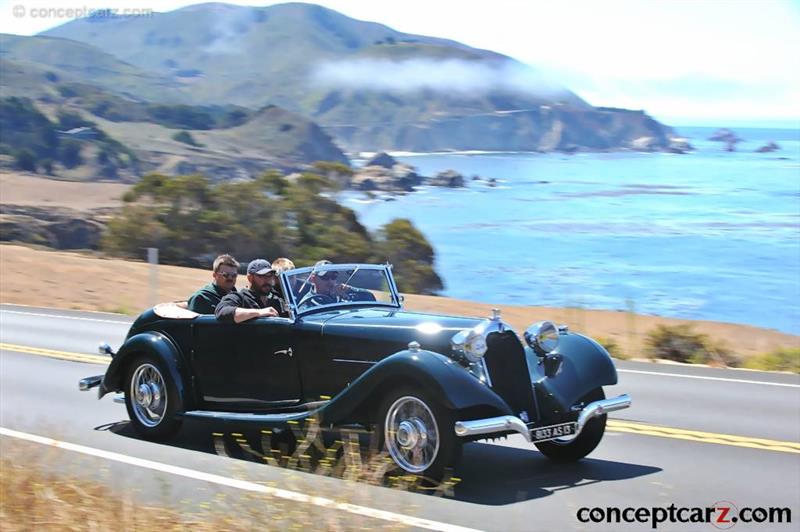