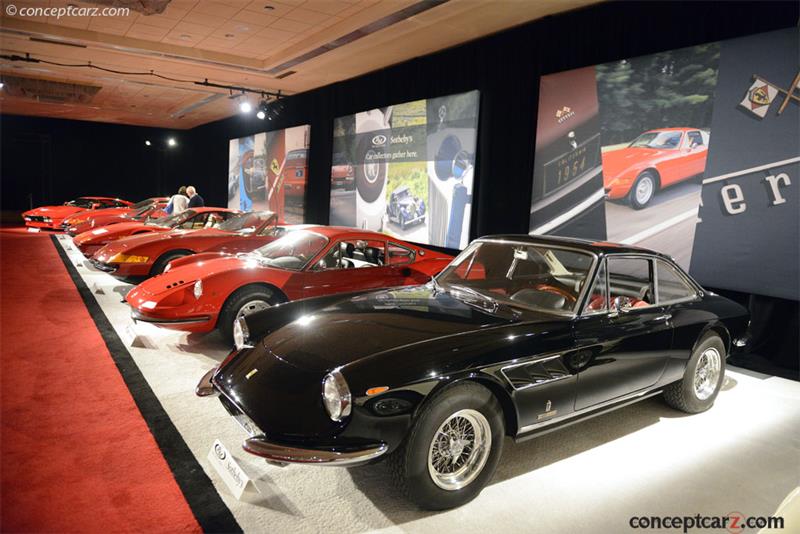 Coupe
Coachwork: Pininfarina
Chassis #: 09847
Engine #: 09847
Sold for $561,000 at 2017 RM Sothebys : Monterey.
598 examples of the 330 GTC were produced and this is the 219th example. It was originally finished in Argento over Nero and fitted with factory options of air conditioning and power windows. It was sold new in Genova, Italy to a Mr. Coppola in 1967, where it would remain for six years. In December of 1973 it was sold to Luigi Chinetti Motors and exported to the United States that same month. Its next owner was a resident of Savannah, Georgia. In 1984, the car was purchased by Edward A. Weschler Jr., of Nashotah, Wisconsin.
The car remained with Mr. Weschler for two years before it was sold to Robert L. Bodin of Minneapolis. There, the car was repainted red. 1989, it had passed to Tim Traff of Wayzata, Minnesota, who had the car refinished in its current colors of black over a red interior. Its next Minneapolis-based owner kept the car for about a decade. While in his custody, the car was shown at the Cavallino Classic in 2002 as well as Concorso Italiano in 2004.The current owner acquired the car in 2008 and showed it Carmel-by-the-Sea Concours in 2008, where it won 3rd in Class. It was also shown at the 2012 Cavallino Classic. It has spent the majority of time at his residence in Florida.
In 2016, the car received a complete mechanical overhaul by the Ferrari specialists at Motion Products Inc. of Neenah, Wisconsin. It has a set of new Michelin XWX tires fitted to the car's Borrani wire wheels. Receipts for this work totaling to $45,000.
Currently, the car has just over 26,600 miles on the odometer.
By Daniel Vaughan | Nov 2017

1967 Ferrari 330 GTC's that have appeared at auction but did not sell.