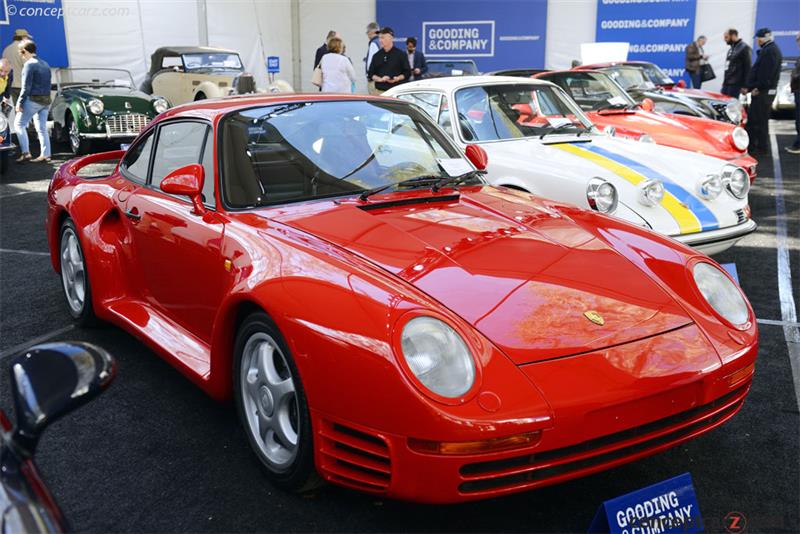 Coupe
Chassis #: WP0ZZZ95ZHS900110
Sold for $1,100,000 at 2018 Gooding & Co. : Amelia Island.
This Porsche 959 was completed in October of 1987 and finished in Guards Red and given heated, electrically adjustable sport seats. It has a burgundy and gray tri-color cloth interior and is believed to be the only known Komfort in this color combination. It is one of just two Komforts to have this interior, the other being finished in white. This car was formerly part of Yoshiho Matsuda's collection, the Porsche Museum of Japan. Around 2001, Marc Chase of Symbolic Motors in La Jolla, California, imported this 959 to the United States. It was given permanent entry under the 'Show or Display' exemption. It was entrusted to Wallace Environmental Testing Labs Inc. in Houston and Northern California Diagnostic Labs in Napa to gain certification for federal and California emissions requirements.In 2005, the car was sold by Gooding & Company at their Pebble Beach Concours d'Elegance auction to Herb Chambers. In 2009, it was traded to Motor Classic & Competition Corp of White Plains, New York, who sold it to collector Steven Goldman of Woodcliff, New Jersey. The car remained with Goldman for less than a year before it was sold to RPM Sports Cars in Houston. In June of 2010, it entered into its current ownership.
Currently, this Porsche has less than 7,400 km on its odometer.
By Daniel Vaughan | May 2018