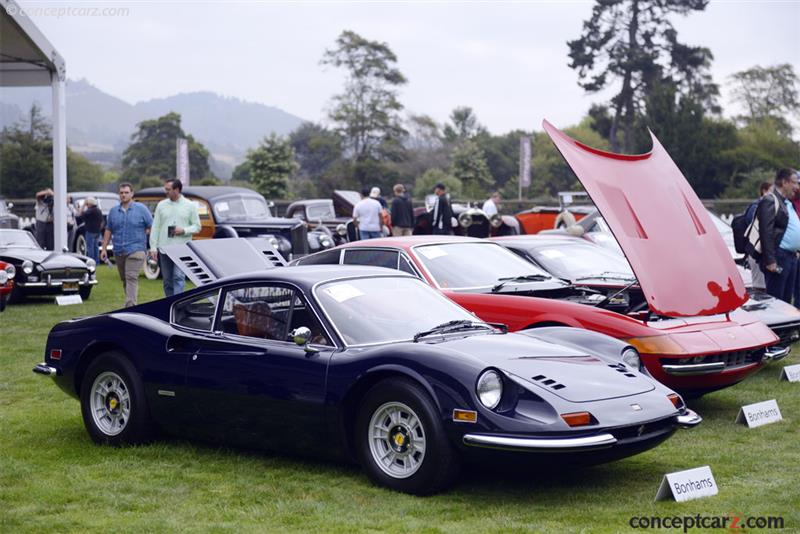 Coupe
Designer: Scaglietti
Chassis #: 03496
Sold for $214,500 at 2012 Gooding & Company, Amelia Island, Fl.
Sold for $373,500 at 2018 Bonhams : Quail Lodge.
The Dino 206 GT made its debut at the Turin Motor Show in 1967. It was powered by an all-aluminum, 2-liter, four-cam V6 engine mounted transversely behind the passenger compartment, and power was sent to the rear wheels via a five-speed transaxle. It wore a Pininfarina designed body by Leonardo Fioravanti with coachwork by Scaglietti. After 152 examples had been built, the 206 was succeeded by the 246 GT. It was shown at the Turin Show in November of 1969 and it was visually similar to the car it replaced. The most significant change was the more powerful 2,419cc, iron-block V6 engine and it used steel, rather than aluminum, for the body. Its wheelbase had also gained 2.4 inches, and the fuel tank was enlarged.The 246 was built in three series, referred to internally as 'L,' 'M,' and 'E.' Series 'L' cars, produced in late 1969 through 1970, have road wheels with a single knock-off spinner, front quarter bumpers that extend into the grille opening, and head rests mounted on the rear bulkhead. A short run of Series 'M' cars were produced in early 1971. The Series M cars had five-bolt road wheels, seat-mounted headrests, and an internal rear boot lid release catch. The Series E cars were built from early 1971 to the end of production in 1974. These cars incorporated all the changes to the Series 'M' models, along with further modifications to the gearbox and engine. A Targa-Top version dubbed the 246 GTS made its debut in 1972.This particular Dino Coupe was completed at the Ferrari factory on March 1st of 1972. It was built to U.S. market specifications and configured as a left-hand drive vehicle. It was optioned with power windows, air conditioning, and Cromodora wheels. It was finished in Bianco Polo (white) over a Rosso Scuro (red) interior.
This Dino was sold new to Ferrari importer Luigi Chinetti Motors, through whom it found its first owner, a Mr. H. Olson. About a decade later, the car was sold to Mr. Rayburn B. Dobson of Woodbury, Connecticut, and later sold to Mr. Ari Embiricos of Cherokee Station, New York, by the end of the 1980s.
In 2005, while in the care of a former owner, the car was given a comprehensive and factory-correct restoration. It was refinished in a color much like the period-correct Dino color 'Blu Scuro Dino.' The interior was done in the finest leather available, with the 'Daytona style' seats re-trimmed in Tobacco brown, with black inserts. Since 2012, the car has been owned by a Texas-based collector of supercars.
By Daniel Vaughan | Oct 2018

1972 Ferrari 246 Dino's that have appeared at auction but did not sell.