The Porsche Carrera 2 was introduced for the 1962 model-year, internally coded as GS 2000, and wore Reutter's twin rear-grille T-6 bodystyle. Perhaps the most distinguishable feature that set it apart from the standard pushrod 356B was the dual exhaust that emerged from an apron under the rear bumper valance. Approximately 310 examples of the Carrera 2 were produced in total. This 1963 Porsche 356B Carrera 2 Grand Sport spent the first two years of its existence in the care of the late Baron Huschke von Hanstein. It left the factory fitted with an optional Eberspacher gas-electric auxiliary heater and a retractable sunroof, three-point seatbelts for driver and front-seat passenger, an exterior thermometer, and a clock mounted to the glove-box door. There is a Blaupunkt multi-band radio, speaker, and antenna, a pair of driving lights, and the Carrera's signature rear exhaust apron. The car's first private owner was Kar Krafft & Söhn GmbH in Duren, Germany, where a Mr. Eberhard Hess used it for business travel. Mr. Hess noticed that the car used a lot of oil, so it was returned to the factory where an already-broken-in replacement was installed. On one of his trips, Hess was involved in a crash on the A3 between Köln and Frankfurt. Mr. Hess was fine but the car received front-end body damage, and after receiving an insurance settlement, Hess decided to sell the car. The car had been in Mr. Hess's care for a year.
Porsche's history is not fully documented. Around 1970 or so, it appears the Carrera passed through the hands of a Mr. Kurt Kosel in Krefeld. Around this time, it is believed that the engine was overhauled by H&H Borgmann in Krefeld. The car was eventually sold to a Mr. Haron of New York City. Included in the sale was a spare two-liter four-cam engine, a set of steel 5.5-inch wheels, and a wood-rimmed steering wheel.
The car returned to the United Kingdom in 1978. It may have spent some time in France before it was returned to England and placed into long-term storage. Around 1998, it came into the care of Roger Bray in Exeter. A restoration soon began, including the shell being placed into t a rotisserie and stripped to bare metal, with rusted panels replaced as needed, after which the car was resprayed in its original Light Ivory paint. The engine, which may be the third such unit installed in the car, was fully rebuilt. After the restoration, it was featured in the August 2013 issue of Britain's 'Classic Porsche' Magazine. It soon came into the care of its current owner.This car is powered by a 1966cc dual overhead cam flat four-cylinder engine fitted with dual Solex 40PII-4 downdraft carburetors and produces 130 horsepower. There is a four-speed manual transaxle, independent suspension, and four-wheel disc brakes.
By Daniel Vaughan | Oct 2018 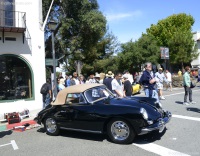 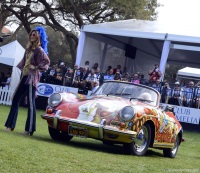