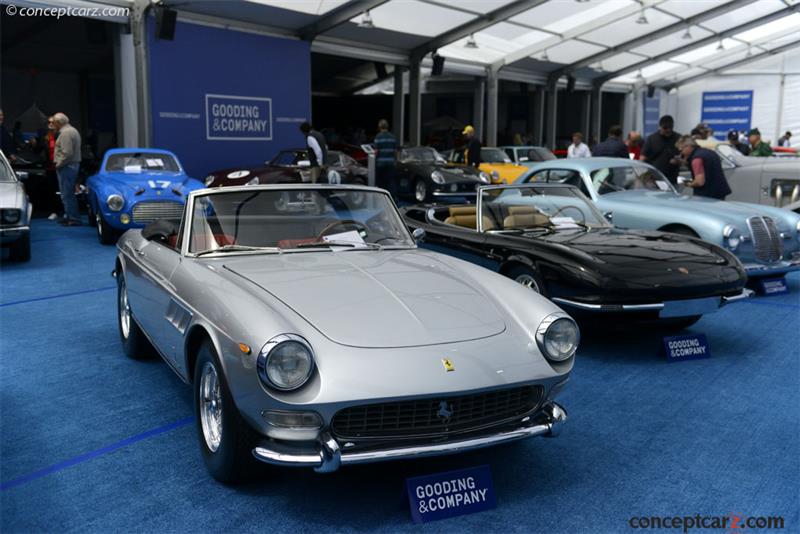 Spider Convertible Coupe
Chassis #: 07957
Engine #: 07957
Sold for $1,760,000 at 2018 Gooding & Company : Pebble Beach.
Ferrari introduced the 275 GTS in October of 1964. These open grand touring car were clothed with Pininfarina coachwork and powered by a 3.3-liter V-12 engine. Other mechanical details included a five-speed transaxle, fully independent suspension, and four-wheel disc brakes. This particular example was along the last 30 of just 200 examples built. It was completed in December of 1965 and finished in Grigio Fumo (Smoke Gray) with red leather upholstery. It was destined for the United States market and sold in early 1966 to Ferrari's official North American distributor Luigi Chinetti Motors in Greenwich, Connecticut. Its first owner was a Texas-based owner, and it would remain in Texas until late 1982 through a series of owners. In 1972 it was owned by Richard Miller of Dallas, and by July 1974, it was in the care of Dallas resident Michael Kahn. By May of 1976, it was owned by Charles Nearburg of Dallas. Dan Van Winkle of Houston purchased it in April of 1982 and by the end of that year it was sold to Dr. Emil Partak of San Jose, California. It would remain in Dr. Partak's care for 19 years.In November of 2001, the Ferrari was sold to Ralph Furra of Newport Beach, California, who displayed the car at the FCA National Meet and Concours in Los Angeles in May 2002. Mr. Furra retained the car for only a year before selling the car in December 2002 to the current owner, a Southern California based enthusiast. Since then, the care has been shown at the Newport Coast Concours d'Elegance in Irvine, California, in October 2003. In August 2004, it was shown at the FCA International Meet and Concours at Monterey, and based on feedback from the judges, the minor issues that were revealed were later corrected. Substantial work by Classic European Restorations in Oceanside, California soon followed, including a bare-metal refinish in silver paint and a re-trimming of the upholstery in proper red leather.
In April of 2013 and again in April of 2018, the 275 GTS received a Platinum Award at the Concorso Ferrari in Pasadena, California. Additionally, the Ferrari participated in the Copperstate 1000 in 2004 and garnered numerous class awards at smaller shows over the ensuing years. It has been given a Ferrari Classiche Red Book.
By Daniel Vaughan | Nov 2018

1965 Ferrari 275 GTS's that have appeared at auction but did not sell.