Sold for $3,740,000 at 2018 Gooding & Company : Pebble Beach.
Internally designated as Type 718, the RSK replaced the 550 A in 1957. It had a modern and streamlined design with faired-in headlamps, and lower aerodynamic drag than its predecessor. It came with more power, an improved suspension, and better braking. This latest evolution of Porsche's lightweight, four-cam Spyder won its class and finished on the podium at Sebring, Le Mans, and the Targa Florio. A works-entered example won overall victory at the 1959 Targa Florio, leading Porsche's 1-2-3 finish at the event. During its production lifespan, 34 examples of the Type 718 RSK were built. This particular example is chassis number 718-024. It was constructed at Werk I, Porsche's racing shop, in March of 1959, and built to the specifications of a privateer. It was given the improved Type 547/3 engine and came supplied with engine number 90216, transaxle number 718-017, and Continental racing tires. It left the factory wearing white with a beige interior. Its original owner was American racing driver Ed Hugus of Pittsburgh, Pennsylvania. In 1959, Hugus raced this RSK - nicknamed Lucybelle III - at LeMans. It had been given thin blue stripes running the length of the car, a small heart painted on the tail, and race number 37. His co-driver for 1959 was Ernie Erickson from Chicago. By the 19th hour of the race, the RSK was the best-placed Porsche, running 1st in Class and 4th Overall. In the 20th hour it was forced to retire due to a broken crankshaft.
The car remained in Europe for several months following the Le Mans race. Prior to being sent back to the United States, it was borrowed by Porsche for a special ceremony celebrating Edgar Barth, who had recently captured the 1959 European Hill Climb Championship.
Shortly after arriving in the U.S., it was sold to Don Ives of Colorado. Mr. Ives actively raced the Porsche during 1960 and 1961, most often campaigning it at the Continental Divide circuit between Denver and Colorado Springs. In 1962, Mr. Ives competed with the car at the Pikes Peak International Hill Climb, recording a time of 16 minutes, 45 seconds. In 1963 he finished 4th Overall at Aspen Raceways.William Franklin of Sonoita, Arizona acquired the RSK in the late 1970s and raced it in vintage events including the Monterey Historic Automobile Races at Laguna Seca, where it appeared at least three times from 1978 to 1986. Don Orosco of Pebble Beach, California acquired it in the late 1980s. The car's next owner was Dr. Greg Johnson of Irvine, California, who campaigned the RSK in vintage events.The current owner acquired the RSK in 1994. Since then, it has been shown at the Amelia Island Concours d'Elegance in 1998 where it was awarded the Road & Track Trophy.718-024 is currently powered by an unnumbered four-cam engine and transaxle no. 718-048, originally supplied in an RS60. The engine is a flat 4-cylinder unit with dual overhead cams and a displacement size of 1,587cc. There are twin Weber 46 IDA 3 carburetors, a five-speed manual transaxle, front disc brakes, and rear drums.
By Daniel Vaughan | Nov 2018

Sold for $3,740,000 at 2018 Gooding & Company : Pebble Beach.
This 1959 Porsche RSK was purchased new by American racer Ed Hugus who raced a remarkable ten times at Le Mans and who raced this particular car there in 1959. Although a Porsche, this RSK, nicknamed LucyBelle III, was raced in the American colors of white with dark blue stripes. At Le Mans, she finished 20 hours of the race and was in 4th place overall when her crankshaft failed. In fact, none of the Porsches that were entered in that Le Man's race finished it. Ed previously owned two prior LucyBelles - a Porsche 550 Spyder and a Ferrari 250 Testarossa - all named for Lucille Davis, the wealthy financier who backed Ed's Pittsburgh, Pennsylvania, car dealerships. Ed and Lucille were also involved in financing Carroll Shelby's early Cobra venture with Ford. LucyBelle III has recently been restored to her 1959 Le Man's livery by Mark Allin at Rare Drive.

Recent Sales of the Porsche 718 RSK

Porsche 718 RSKs That Failed To Sell At Auction

1959 Porsche 718 RSK's that have appeared at auction but did not sell. 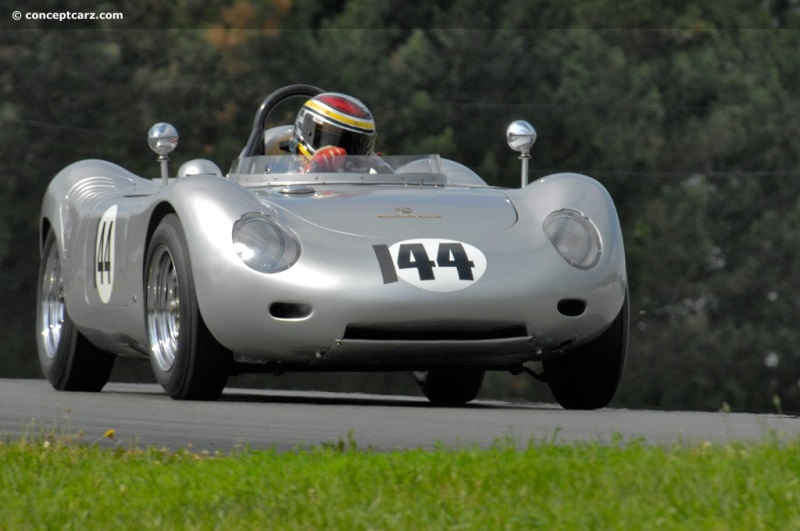 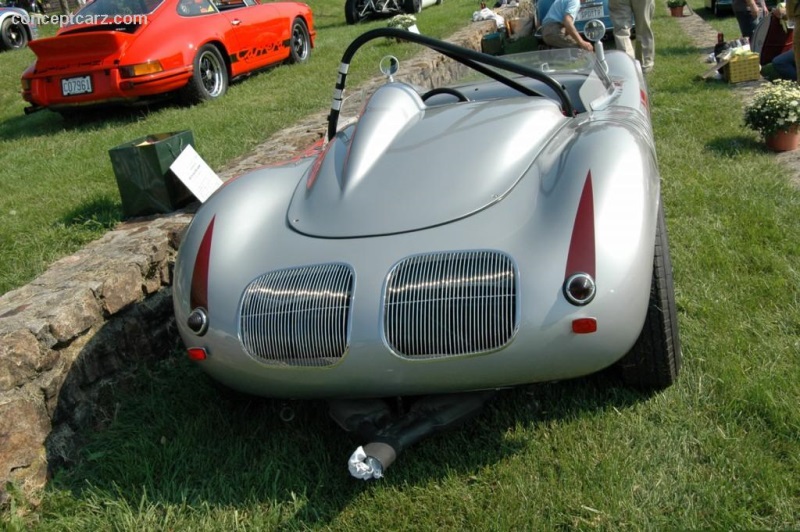 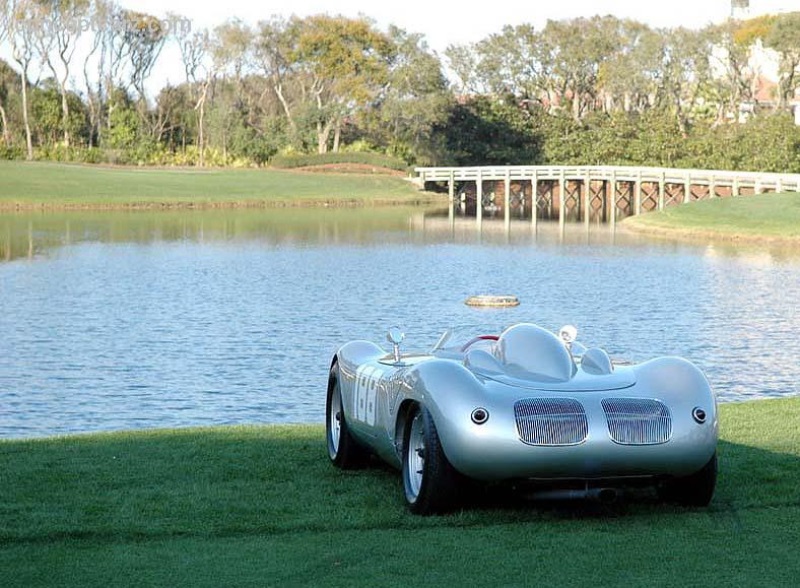 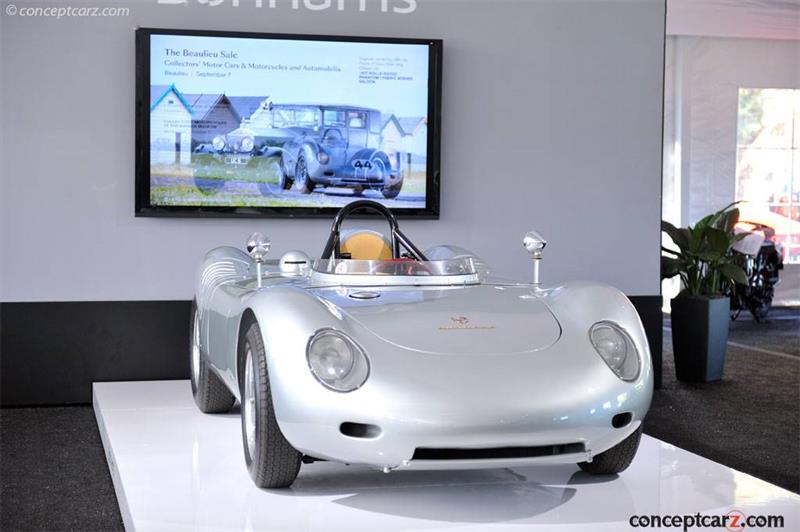 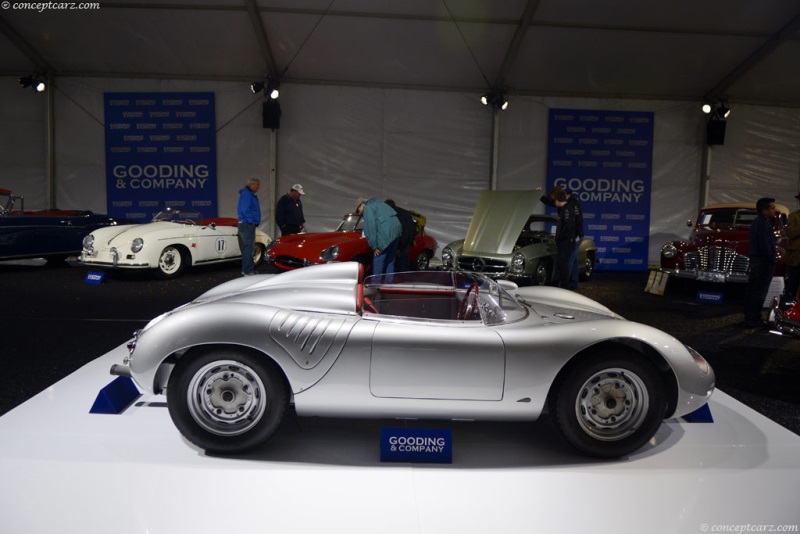 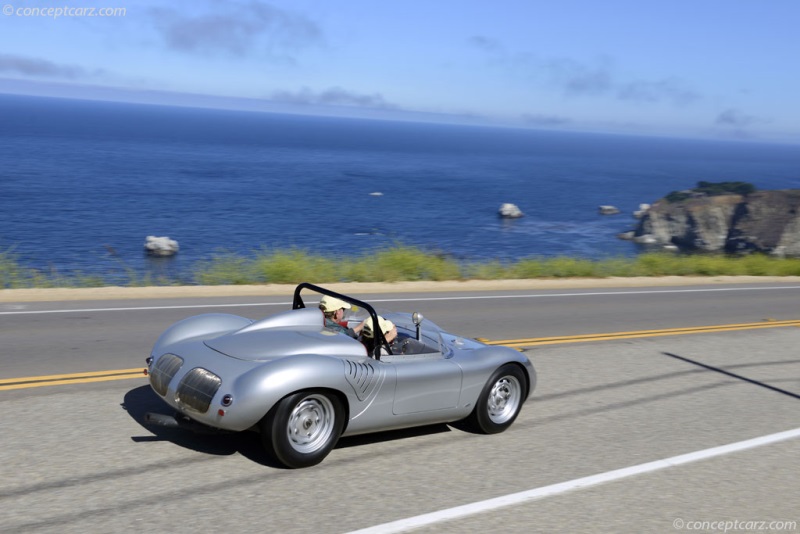 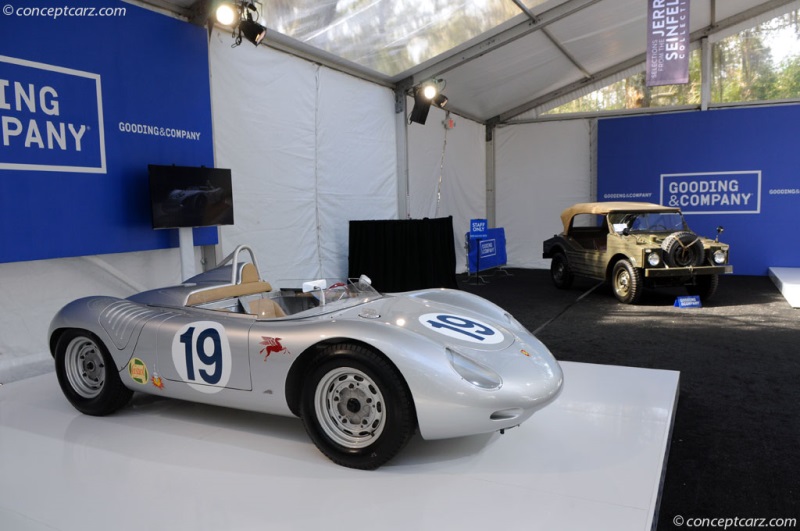 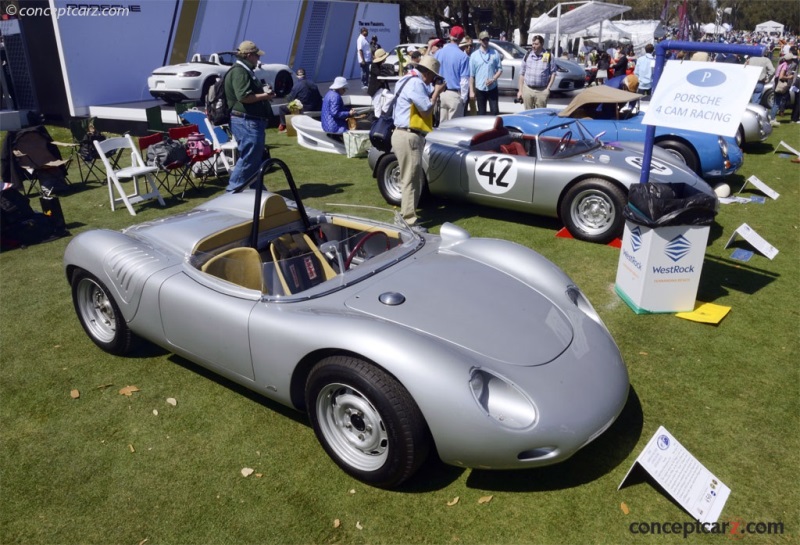 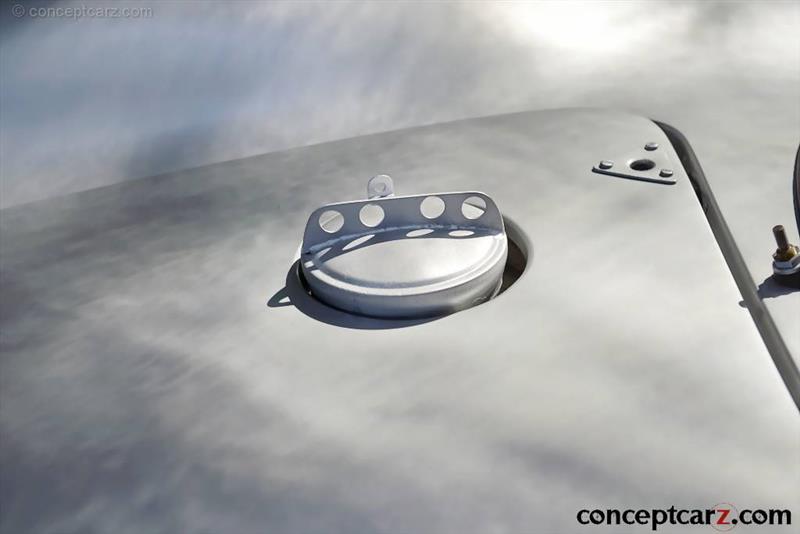 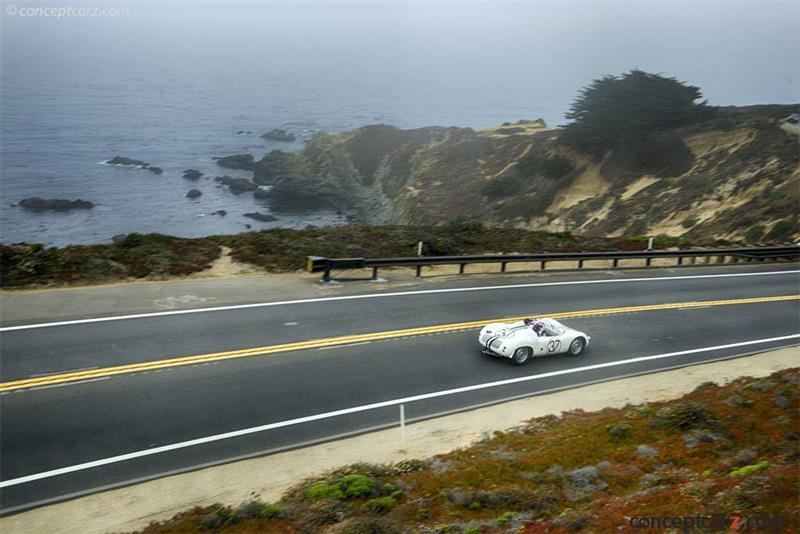 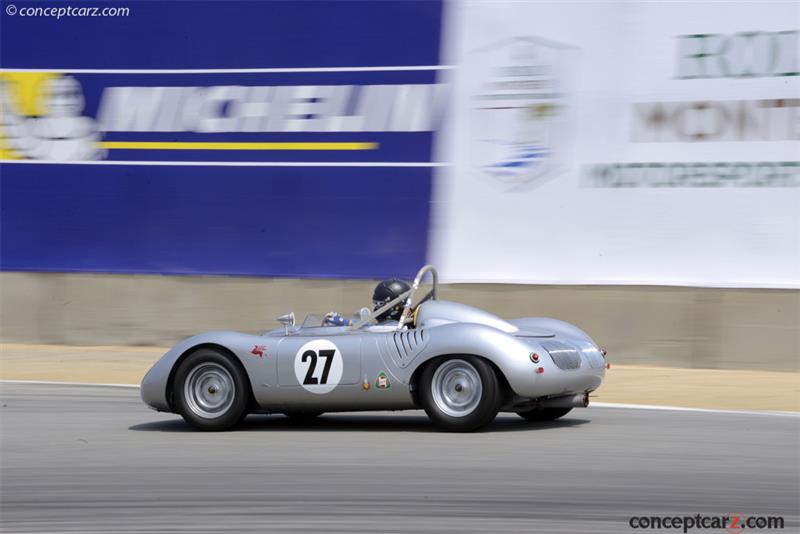 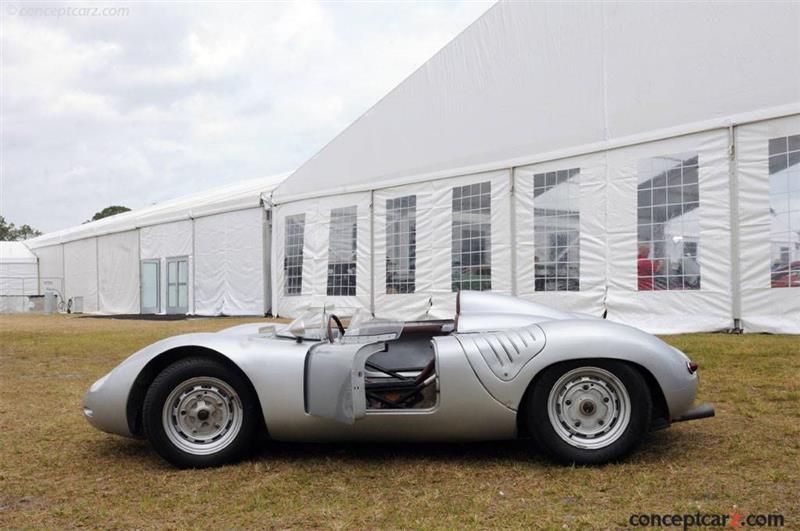 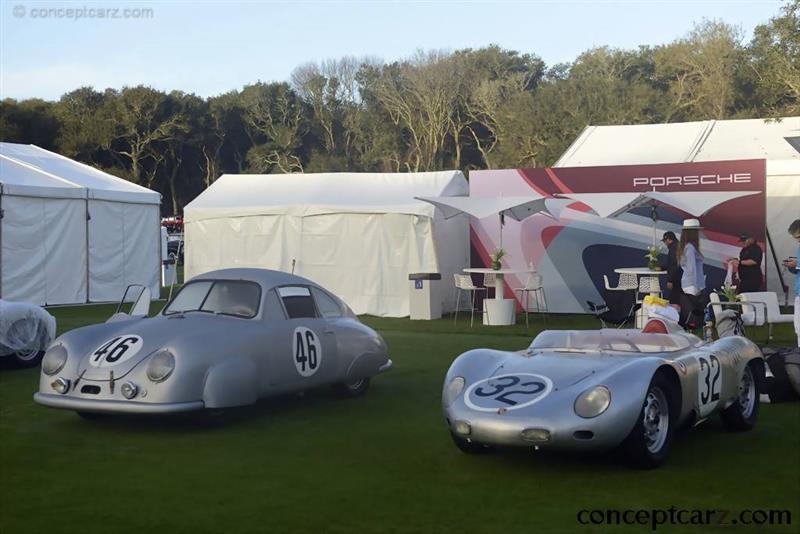