Sold for $630,000 at 2007 Mecum High Performance Auction at St. Charles, Il.
Sold for $1,045,000 at 2018 Gooding & Co. : Amelia Island.
On January 2, 1964, AC Cars Ltd. shipped this Cobra aboard the SS Dongedyk to Shelby American Inc. in Los Angeles. Its transformation began upon its arrival at Shelby's new workshop at the Los Angeles International Airport. The partially assembled AC sports car was made into the proper 289 Cobra. This example was original equipped with late-production features that included the rack-and-pinion steering, American-made Stewart Warner instruments, and a Ford electrical system. It was finished in the uncommon color scheme of silver with a red leather interior. Class A accessories included white sidewall tires, chrome wheels, a luggage rack, a rearview mirror, and a radio with antenna. On March 27th of 1964, the car was invoiced to Service Motors Inc. in Fond du Lac, Wisconsin, for a total price of $5,603.75 (including freight). It was then delivered to Wisconsin and sold to its first owner, Carl Kiekhaefer. Mr. Kiekhafer later had Service Motors order a personalized dash plaque from Shelby, and he then brought the car to Florida, where he maintained a winter home. It remained in Mr. Kiekhafer's care until May of 1966, when it was sold, having just 1,800 miles on its odometer. The new owner was Mike Gallagher, a resident of Green Bay, Wisconsin. Mr. Gallagher retained the car until 1990. During that time, it remained in original condition, with the exception of a repaint in white carried out in 1986. In 1990, it entered the ownership of Bruce Larson who kept it until 1992, when it was sold to Barry Smith of Hollidaysburg, Pennsylvania.Mr. Smith commissioned a professional restoration in 2003, which included having the aluminum body restored and refinished in the original silver.
Around 2008, the car was acquired by Richard Haydinger of Marlton, New Jersey who later sold it to the current owner. In 2017, it was sent to Mark Allin's Rare Drive Inc. in New Hampshire for an even more exacting restoration. Since the restoration was completed, the car has not been exhibited at SAAC meets or concours events.
By Daniel Vaughan | Apr 2019

1964 Shelby Cobra 289's that have appeared at auction but did not sell. 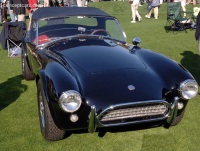