In 1953, Ferrari introduced a range of 4-cylinder racecars aimed at privateer race drivers. The 2-liter Mondials and the 3-liter 735 S Monzas were hugely successful as well as good-looking, having been designed and built by Scaglietti.This Monza was the first 4-cylinder, 4-liter 735 S to be finished and it placed first overall at Imola for Scuderia Ferrari with Umberto Maglioli at the wheel, and first again at the Grand Prix of Portugal with Jose Frolian Gonzales driving. In September, the car was damaged at Dundrod, returned to Ferrari for bodywork by Scaglietti, and simultaneously upgraded to Type 750 specification in readiness for sale. It was in this new guise that the Ferrari was sold to Alfonso de Portago for the Carrera Panamericana, which he undertook without a co-pilot and failed to finish. Undeterred, de Portago shipped the car to Bahamas Speed Week where he secured a first and a second place. Sterling Edwards bought and raced the car at Sebring before bringing it to the Pebble Beach Road Races in April 1955, where he finished second behind Phil Hill in a torrential downpour. Edwards continued to race the car, notching up five wins before the car's final race at Pebble Beach in 1956. Edwards finally sold the car to his engineer, Bob Whitmer, who swapped out the engine for a Chevy V8.
Over the following 60 years, the car fell into disrepair until it was acquired by its current owner in 2016, and a two-year restoration was undertaken.
The original chassis, engine body and gearbox were reunited for the first time in over 50 years. It is currently finished in its 1954 Carrera Panamericana livery where it was raced by de Portago.

The 1954 Ferrari 750 Monza having achieved distinction both for its impressive racing history and its exacting restoration was named winner of the sixth annual The Peninsula Classics Best of the Best Award. The Monza won Best of Show at the 2020 Cavallino Classic, before being named winner of The Peninsula Classics 2020 Best of the Best Award.The 750 Monza was chosen from a selection of four nominees crafted by automakers from Italy, Germany, and the United States including a 1969 Porsche 917 KH coupe, coachwork by the Factory, 2020 Best of Show, Concours of Elegance Hampton Court Palace, a 1931 Alfa Romeo 8C 2300 Monza Spider, coachwork by Zagato, 2020 Best of Show, Salon Prive and a 1929 Duesenberg Model J Town Limousine, coachwork by Murphy, 2020 Best of Show, Amelia Island Concours d'Elegance.The winning 750 Monza made its original debut as a 500 Mondial with a 2-liter motor at the Inaugural Grand Prix of the Imola Autodromo in June of 1954. After driver Umberto Maglioli secured first place for Scuderia Ferrari with the car, it was subsequently fitted with a 3-liter engine, hence the 750 name (the capacity of one cylinder in cc), and is generally considered as the Monza prototype. It was sold in this configuration to Spanish Marquis Alfonso 'Fon' de Portago who entered the car in the first Carrera Panamericana race in 1954. He did not finish. He went on to compete in several other races that year, including the Nassau Race Week, where it secured a 1st and two 2nd places.
The car's next owner, Sterling Edwards, raced the 750 Monza in 1955 and 1956 mainly in California, including the Pebble Beach Road Races (an event he founded), garnering four 1st place and two first-in-class wins in the car. The car spent most of the ensuing 50 years in a small San Francisco-area warehouse, disassembled, though its chassis, body, engine, and gearbox were all carefully preserved, as were the original owners' manual, toolboxes, build sheets, and a treasure trove of original photographs of the car. In 2016, a complete restoration of the car was initiated under the direction of Bob Smith Coachworks, located in Gainesville, Texas, a process that took the new owners over two years to complete. The vehicle's livery was returned to that which it sported in its first Carrera Panamericana race.

Ferrari 735 S Monzas That Failed To Sell At Auction

1953 Ferrari 735 S Monza's that have appeared at auction but did not sell. 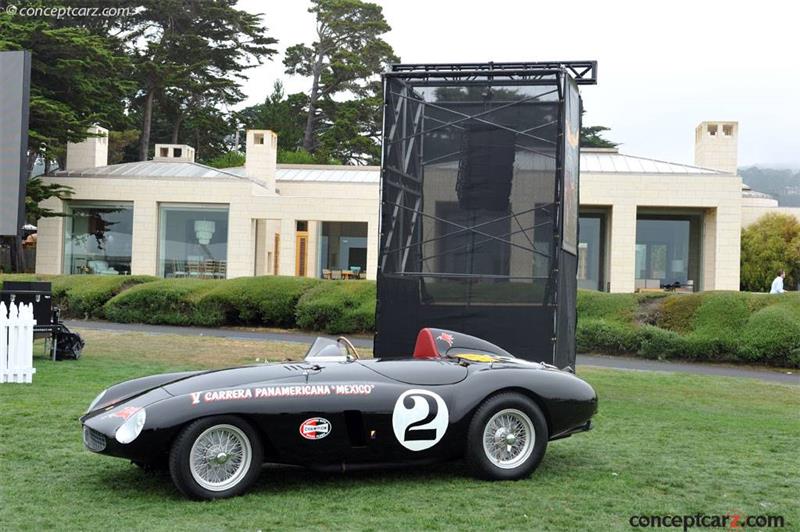