Sold for $456,000 at 2019 RM Sothebys : Monterey.
Porsche unveiled the Type 964 version of the 911 in 1988 and it came with several considerable technological upgrades over its predecessor. The list of changes included power steering, a retractable spoiler, a switch from torsion bars to coil springs, and shock absorbers. The 964 debuted a complex and effective all-wheel-drive system sourced from the 959 supercar. Despite the questionable economy of the early 1990s, the Porsche was very well received.Despite its advanced technology and improved performance, customers demanded more. Porsche's customer motorsport program, overseen by Jürgen Barth, was prepared to answer their request. Barth began work on reducing the weight of the car while keeping its sophisticated all-wheel-drive system intact. Body panels were replaced with aluminum and fiberglass and sound insulation and carpeting were removed. To prepare it for the track, it was given a seam-welded tub and fixed windows with sliding panels. The standard spoiler that rotated upward at speed was replaced with a fixed unit. The stock seats were replaced with Recaro race buckets from the 964 Cup cars with factory five-point harnesses, and a Halcon fire-suppression system was fitted. They received an integrated roll cage, auxiliary gauges, and switches mounted where the radio and climate controls would be. The suspension was lowered about an inch, and staggered 6-inch front and 8-inch rear wheels, or optional 7- and 9-inch wheels were installed. The air cleaner was removed and a modified exhaust system was attached to the 3.6-liter flat-six engine. The five-speed manual transmission received a special clutch and flywheels. It was given the mechanically adjustable drivetrain from the Type 953. The differentials were manually adjustable using the rotary controls, while two temperature gauges monitored the individual differentials.The result of this work was called the Carrera 4 Leichtbau (Lightweight) and it weighed in at just 2,420 lbs. Twenty-two examples were built and they were not granted a standard 17-digit identification number and was thus not eligible for import into the U.S.
This particular example is the 15th serialized example and has the optional 7- and 9-inch wheels. Its first owner was Mike Amalfitano, who negotiated with the EPA and DOT to successfully petition then-New Hampshire governor Judd Gregg to help him legally import it to the U.S. for competition-only use. Although it was intended to race the Mt. Washington Auto Road Hillclimb, it never competed. In fact, it has reportedly never competed.
It currently has just under 4,500 kilometers on the odometer.
By Daniel Vaughan | Dec 2019

1991 Porsche 911 Carrera 4 Leichtbau's that have appeared at auction but did not sell. 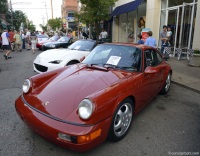 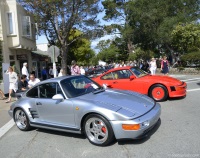