This 1932 Buick 8 Deluxe Two-Door Victoria was offered for sale at the 2007 Sports and Classic Car Auction presented by The Worldwide Group, in Hilton Head Island, SC where it was estimated to sell for $35,000 - $45,000. It is finished in two tone with a red exterior and formal black fenders. It has been treated to a frame-off restoration which was completed in the early 2000s. At that time the charcoal interior was also restored and is still in great condition.When new, this car was ordered with many rare options including dual side mounts, factory heater, factory window trim, rear window shades, and full chrome. General Motors has a very long history that began on September 16th of 1908, in Flint Michigan. It was a holding company for Buick and was controlled by William C. Durant at the time. GM later acquired Oldsmobile later that year. The following year, they acquired Cadillac, Elmore, Oakland - which would later be renamed to Pontiac, and several other businesses. In 1909, GM acquired the Reliance Motor Truck Company of Owosso, Michigan, and the Rapid Motor Vehicle Company of Pontiac, Michigan.
Due to all these acquisitions, GM acquired a large amount of debt, around $1 million. As a result, Durant lost control of GM in 1910 to a bankers trust.
The Buick Motor Car Company was formed as an independent motorcar manufacturer on May 19th of 1903. Its founder was the Scottish-American David Dunbar Buick. Among his accomplishments were the invention of the overhead valve engine which helped spur the company's success. In 1904, James Whiting took control of the struggling Buick Company and brought in William C. Durant to manage this new acquisition. Under Durant's guidance, the company quickly became one of the largest car makers in America. The profits made by the Buick Company were used to fuel several other acquisitions and the creation of General Motors.At auction, this 1932 Buick was offered without a reserve, which proved to be useful for the buyer as the high bid was short of the estimated valve. None-the-less, the car was sold, selling for $33,000 including buyer's premium.
By Daniel Vaughan | Nov 2007
No auction information available for this vehicle at this time.

1932 Buick Series 60's that have appeared at auction but did not sell. 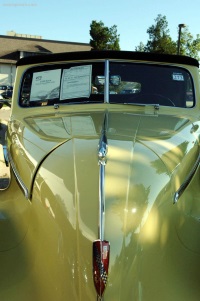