Chief engineer Dr. Helmuth Bott proposed an advanced competition car with new technology that could improve the 911 and save it from extinction. Chairman Peter Schutz approved the risky project. The gamble worked and Dr. Porsche gave Bott this prototype upon retirement.

Bott knew racing would fast-track engineering. A Group B rally car could test ideas under extreme conditions and redefine what a Porsche could be. With Schutz's approval, project 'Gruppe B' kicked off in 1982. Three 911s were transformed into 953s with an early version of the 959's front-wheel-drive. One of them won the 1984 Paris-Dakar Rally - over 426 entries.

Three early 959s returned for Paris-Dakar in 1985, but without the planned bi-turbo. None finished, but it was an education. Later that year, a 959 with the trick engine won the Pharo's Rally in Egypt. 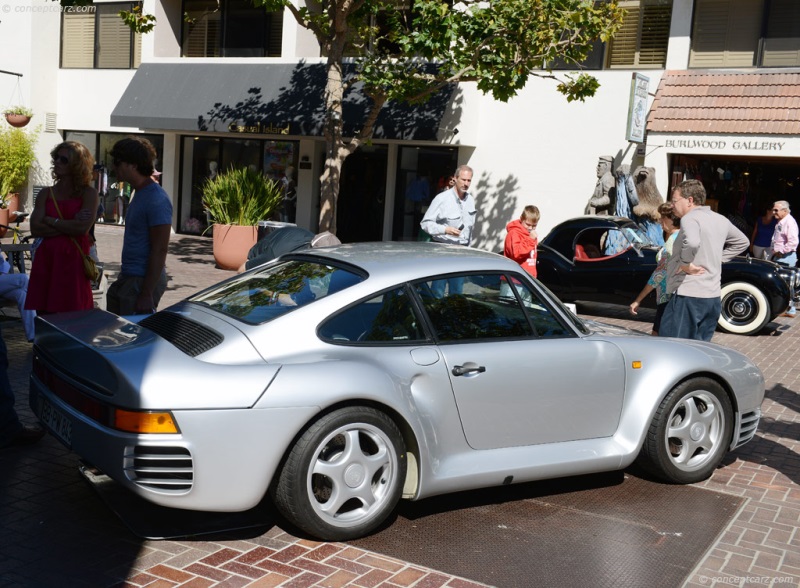 With an improved four-wheel-drive system, 959s took first and second place in the 1986 Paris-Dakar. And back in Stuttgart, the production car was ready.

The ideas Bott developed modernized -and saved - the 911, and some 959 innovations still underpin today's Porsches. These are a few of its advanced features:
- Improved aerodynamics, including speed-controlled variable ride height that eliminated lift - even at 200 miles per hour.
- Enhanced cornering stability from Porsche's first four-wheel-drive and better front/rear weight distribution.
- The engine's water-cooled heads and air-cooled cylinders with four valves per cylinder eased compatibility with coming emission-control devices.
- Sequentially-mounted turbochargers improved throttle response and fuel consumption; a small one responds quickly at lower speeds and a big one kicks in when power is needed.

The guiding spirit. That's how former Porsche Racing and PR director Manfred Jantke described Bott's role - and not just when developing the remarkable 959. Bott started with Porsche in 1952 and rose to head of research and development, shaping Porsche's engineering achievements over the decades.

Of 29 developmental 959s built, the first six were Vorserienwagen - prototypes for extended road tests. This particular example is the last of those - designated V6. 'He drove it a lot and he drove it hard,' said Jantke. 'It was also the only prototype when Mr. Bott tried out a catalytic converter.'

When Bott retired in 1988, Dr. Porsche had V6 fitted with personalized leather luggage and presented the car as a gift.Source - Brumos Collection
No auction information available for this vehicle at this time.