Sold for $995,000 at 2020 Gooding & Company : Amelia Island.
This 300 SL Roadster is among the first examples built. It was completed in June of 1957 and fitted with engine number 7500108 and body no. 7500020. Due to its early production date, it was given rare hand-tooled production components that were shared with the Gullwing.This example was built to order for Princess Ashraf ol-Molouk Pahlavi, the twin sister of Mohammad Reza Pahlavi, the last Shah of Iran. Mohammad Reza Shah eventually became a major shareholder in Mercedes-Benz and is personally credited with the creation of the Gelandewagen (Cross-Country Vehicle), when he placed a 20,000-truck order with Mercedes-Benz in the 1970s. Princess Ashraf was also fond of the marque and would own several models during the 1950s, including a 300 S Roadster and a 220 S Cabriolet. Princess Ashraf special-ordered this 300 SL Roadster in special-order color Perlgrau (Pearl Grey, DB 125) with red leather upholstery, black soft top, Becker Le Mans radio, Michelin tires, and European equipment, including lighting and instrumentation. Around 1961, the car was acquired by Thomas Foster Hamilton, the founder of the Hamilton Standard Company, a firm that revolutionized the propulsion technology of propeller-driven aircraft in the years prior to WWII.
It is believed that Mr. Hamilton acquired the 300 SL while living in Paris during the early 1960s and had it prepared for use in European rallies. The work included the installation of a pair of Marchal driving lights, leather hood straps, three-spoke Nardi steering wheel, aircraft-style safety belts, and drivers-side aluminum roll bar, as well as front and rear 'nerf bars,' with a central Marchal spotlight and club badges mounted on the front crosspiece. There is a custom-fabricated, aviation-inspired instrument panel with a Halda Speedpilot, Tapley & Co. gradient and acceleration meter, Abercrombie & Fitch-branded Heuer Autavia rally clock, and a Sufft Auto-Aeroid altimeter.
The car remained with Mr. Hamilton and his family for decades, with ownership passing to T.L. Hamilton in 1969, and then to Thomas F. Hamilton II in 1973. In 1996, Tom Hamilton II sold the Roadster to Scott Dapron of Prescott, Arizona. It remained in Mr. Dapron's collection until his death, whereupon it was sold to the current owner. This Roadster is currently in unrestored condition with its matching-numbers engine, original leather upholstery, and period rally equipment The bodywork has been refinished in Weissgrau (White Gray), with an appropriate DB 158 paint code tag in the engine bay. Sections of the original Perlgrau paint are present behind the dashboard. The factory hardtop and wheels are finished in light brown. There are period-correct Michelin X tires and proper Sekurit side glass. The car has its tonneau cover (stamped 020), tool kit, jack, custom fabric tonneau, and Mercedes-Benz owner's manual and parts catalogs,
By Daniel Vaughan | Jul 2020
Provenance * * Please note, dates are approximate

1957 Mercedes-Benz 300SL's that have appeared at auction but did not sell. 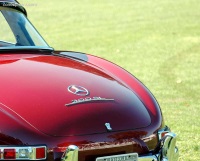 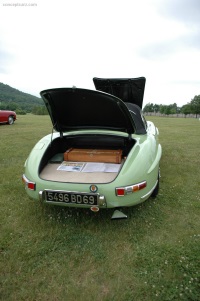 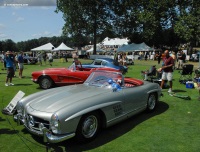