Sold for $35,200 at 2007 Monterey Sports and Classic Car Auction.
This 1958 BMW Isetta 300 was brought to the 2007 Monterey Sports & Classic Car Auction presented by RM Auctions, where it had an estimated value of $20,000 - $30,000. It was offered without reserve. Power is from an 18.2 cubic-inch single-cylinder engine with an overhead valve and an available 13 horsepower. There is a four-speed manual gearbox and drum brakes on all four corners. The car rests on a small, 59.1-inch wheelbase. These vehicles were the ultimate in efficient and affordable transportation. They were developed by Renzo Rivolta's Iso works in Italy and following World War II, were licensed by BMW for manufacture in Germany. BMW introduced them in 1955 and it was not long before they were nicknamed the 'das rollende Eei', meaning the 'rolling egg.' On the BMW stage at the 1955 Frankfurt Auto Show, along side a large BMW 505 Pullman Limousine, the Isetta was formally introduced to the world. The timing was good, as many consumers were looking for a vehicle that was economical, affordable, and convenient. The engine is a four-stroke, single-cylinder air-cooled unit borrowed from a BMW motorcycle. The total weight was around 770 pounds, top speed was over 50 mph, and fuel economy was in the 40 to 45 miles per gallon range.
Among the accomplishments of the Isetta is saving the financially-strapped BMW Corporation from being purchased by Mercedes-Benz in the late 1950s.
This Isetta 300 has traveled a mere 34,875 miles since new. It has been recently treated to new trim, upholstery, tires and other refurbishments. It is finished in a two-tone paint scheme of aqua blue and white top. It is reliable and mechanically sound. Much to the amazement of many, this vehicle proved that the collector car market for small vehicles is alive and strong, as bidding surpassed the estimated value and settled at $35,200 including buyer's premium.
By Daniel Vaughan | Dec 2007 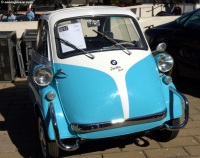