Sold for $145,600 at 2021 Bonhams : Quail Lodge.
Cristobal Galjuf and his father were motorsport fans living in Peru, although the elder Galjuf did not support his son's racing efforts due to the inherent dangers of the sport. When Cristobal did race, he did so under a pseudonym so his father would not find out. He chose 'Batman,' after his favorite comic book character, and the nickname would remain with him for his entire racing career. 'Batman' frequently raced with a Ford Mustang, initially a Shelby GT350 and later a Group 2 Mustang. When Cristobal got married in June of 1968, he bought his new bride a hardtop coupe, and since she worked at the Ford assembly plant in Lima, he used her employee discount. In 1971, his wife's Mustang became his next race car and he entrusted its motorsport preparation to Charlotte, North Carolina, aircraft hangar of Holman & Moody.At the time, Peru was under a military dictatorship, so transporting the car to Holman & Moody was difficult. An arrangement was finally made to fly the car out to Miami, where Holman & Moody picked it up for transport to Charlotte. It would spend over three months at Holman & Moody's facility where it was transformed into a highly able racing machine. Upon its completion, Cristobal traveled to Charlotte, then to Georgia, where he had rented out Road Atlanta for a day with support provided by Holman & Moody mechanics. After the test session, the car was sent back to Charlotte where it was completely disassembled and shipped back to Peru, under the guise of used mechanical parts.
It was re-assembled in Peru and used by 'Batman' in road rallies in the 400 class, most frequently as number 406 or 407. It earned first place overall finishes at the Mollendo-Arequipa-Mollendo event and the races at the Circuito Passamayo and Circuito Canete. Second place overall finishes were achieved in the Lima-Arequipa-Lima and a second event at Circuito Pasamayo. Another 1st overall was achieved in the 3,000-kilometer race of Frontera-Frontera, held on the Panamericana road from the border of Ecuador and Peru up to the top of Peru and Chile.
After the very successful season, the car was sent back to Holman & Moody in preparation for the next season. When the car returned back to Peru, 'Batman' had decided to withdraw from competition following the tragic death of a close friend and fellow driver. The car was sold to Miguel Navvaro who raced it for a couple of years, although without the same success achieved by 'Batman.' It was later sold to Brazo Vicich who retained it into the 1980s. The car's next owner was 'Batman's' - Cristobal Galjuf, Jr. who stumbled upon the car on accident. The engine of the 1967 Mustang was sent to Holman & Moody to be rebuilt, but it was discovered to have a fatal crack, so a new engine was sourced and built by the shop. The current owner visited Nicolini's collection while on a trip to Lima in 2011 and fell in love with the 1967 Mustang. A price was negotiated and the car was sent to the United States via cargo jet. Upon its arrival, it was given a full restoration undertaken by Cameron Bishop to exactly the original specifications. Since the Ford Racing high-nickel, 302 cubic-inch V8 replacement engine built by Holman & Moody was a 'tall deck' mill, it did not actually fit into the car. So an all-new exhaust and hood were fabricated to accommodate the V-8 and its Holley four-barrel carburetor, Roush-prepped intake, and Bud Moor NASCAR aluminum heads. Upon completion, the car received a replacement serial number tag from Holman & Moody to identify it as one of their original creations.
By Daniel Vaughan | Oct 2021

1967 Ford Mustang's that have appeared at auction but did not sell. 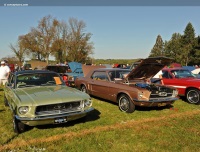 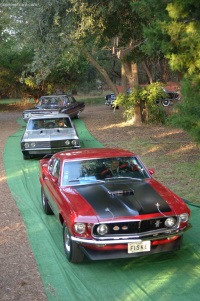