Sold for $3,305,000 at 2021 Gooding & Company : Pebble Beach Concours Auction.
This Aston Martin DB4GT was completed in June of 1961 and left the factory finished in the color scheme of Goodwood Green with red Connolly leather upholstery. It rode on Dunlop RS5 tires and a 3.54:1 rear axle with Powr-Lok limited-slip differential. Upon completion, the car was sent to Hubert Patthey's garage in Neuchâtel, Switzerland, and delivered to its first owner, Georges Filipinetti of Geneva. The car remained in Mr. Filipinetti's care through the end of 1961, driving it some 3,800 km before trading it back to Patthey Garage.Dr. Gwer E. Reichen of La Chaux-de-Fonds, Switzerland acquired the DB4GT in February of 1962 who sent it to the Aston Martin factory soon after purchasing it in preparation for future competition use, including the fitting of shorter gears and a Bosch brake servo.By the close of the 1962, the car had accrued an additional 10,000 km in road and competition use. It participated in various events including hill climbs and slaloms, and throughout the 1960s, Dr. Reichen was a regular entrant in the European Rally Championship (ERC) with a variety of cars. In October 1964, Dr. Reichen and co-driver Michelle Vouga entered 0154/L in the Swiss round of the ERC – the Rallye International de Geneve. During the multiday rally, the DB4 GT was involved in an accident which necessitated ordering a completely new front body clip from Aston Martin. Repairs were made that November by Patthey Garage and it was repainted blue and fitted with high-performance valve springs sourced from Oskar Ruegg in Pfaffikon.
Over the next three decades, Dr. Reichen drove the DB4 GT regularly, with the odometer showing nearly 100,000 km by the early 1990s. Around this time, the car was given an overhaul by Roos Engineering. Additional restoration work was performed in the early 200s by Garage Eyra of Le Locle, Switzerland, returning the car back to its original road specification.
In 2016, the current owner acquired the Aston Martin and had it imported into the United States.Currently, this DB4 GT is finished in its original Goodwood Green livery over an interior trimmed in green leather and equipped with a period Motorola radio.
By Daniel Vaughan | Nov 2021

1961 Aston Martin DB4 GT Touring's that have appeared at auction but did not sell. 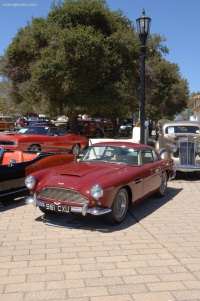