Sold for $516,500 at 2021 Gooding & Company : Pebble Beach Concours Auction.
This 1969 Ferrari 365 GTB/4 Daytona is equipped with a 4,390cc Tipo 251 DOHC V-12 engine with six Weber 40 DCN20 carburetors and delivering 352 horsepower at 7,500 RPM. It has a five-speed manual transaxle, four-wheel servo-assisted ventilated disc brakes, and an independent suspension with wishbones and coil springs. This Ferrari is among the earliest examples of the 365 GTB/4, bearing Scaglietti body no. 38 and engine internal no. B202. It was completed on July 2nd of 1969 and wore Blu Ferrari (Ferrari Blue, code 20-A-185) over beige leather. It was a 'plexinose' example built for the Italian market. The Daytona was delivered in February 1970 to Luciano Ravasio & Sons, the official dealer in Verona, Italy, and sold to local resident Luigi Ravizza. In June 1972, it was stolen, recovered in 1976, and returned to its rightful owner, Gianluigi Cernuschi of Milan. The car remained in Italy through the late 1970s, passing through a succession of owners.
Around 1980, the car was imported to the United States by Max Lagomarsino. It was modified for American use which involved fitting pop-up headlights, a dash-mounted VIN plate, and side marker lights. Perhaps around this time, the body was refinished in its current black livery.
In 1982, the car was acquired by Stephen P. Dean who drove it regularly for approximately 15 years. The car was then partially disassembled and various mechanical projects were completed. Since then, the car has remained in static storage. Currently, the car has 45,303 km on the odometer.
By Daniel Vaughan | Nov 2021 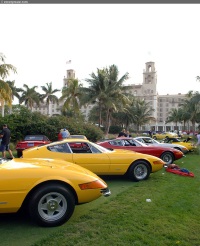