Sold for $3,360,000 at 2021 RM Sothebys : Monterey.
This Porsche is one of 20 serially built 'R' lightweights constructed by coachbuilder Karl Baur. Four examples were initially built, chassis 305876 (R1), 306681 (R2), 307671 (R3), and 307670 (R4), under Piëch's supervision, while the other 20 examples in a numbered production series (118990001R-118990020R) were built by Karl Baur. They used the steel unibody from the 911, but all the removable panels were replaced by fiberglass (except for R3 which had doors and lids made from aluminum). Plastic replaced the rear and side glass, and new lightweight fiberglass front fenders and rear turn signal housings were created and fitted with small NSU and VW lamps. The '20 cars' rested on Fuchs wheels with 'Deep Sixes' in the front and 'Seven Rs' in the back, with widened fenders to accommodate the wider tires. The interiors housed Deel Scheel racing seats, special racing components, and little else. They were devoid of non-essential items, such as sound-deadening material, headliners, etc. Power was sourced from the Type 901/22 flat-six racing engine from the 906 and some of these engines were magnesium-cased, while others were formed from heavier aluminum. The standard 911 S engine produced 160 horsepower, while the engine powering the 911 R produced approximately 210 brake horsepower. 18 of the cars were clothed in Light Ivory exterior finishes with minimal black lightweight interiors and black rocker stripes. The remaining two examples were finished in customer-specific paint schemes. Porsche attempted to homologate these vehicles for racing, claiming they were a variation of the 911 S, but the sanctioning body did not agree, meaning these 911 Rs were forced to run as prototypes. Eight of the 20 'production' cars were sold to France, and the remaining examples were eventually sold to privateers.This particular 911 R left the factory on October 26th of 1967. It was sent to Porsche Sonauto France in Paris, and thence to its first owner, Fernand Schigler. Four days after licensing the 911 R (on October 30th of 1967), Schigler had installed a quartet of driving lamps and entered the 1967 Tour de Corse as No. 96 with Gérard Couzian as his co-driver. Schigler also entered the Criterium des Cevennes.
During the 1968 season, Schigler entered five rallies including the Lyon-Charbonnières–Stuttgart Solitude, the Ballon d'Alsace, the Course de Côte de Fribourg, the Rally Lorraine—where he placed fourth overall—and the Course de Côte de Vuillafans.
Michel Martinach acquired the 911 R from Schigler in January of 1969 and raced it at the Rallye Route du Nord. At the Rallye de Rouen, Martinache damaged the car in practice. It is believed that Martinach then sold the transmission and engine to Gerard Darton Merlin, a.k.a. 'Gedehem,' as spares for two other 911 Rs that Merlin owned. The chassis was sold to Marcel Balsa of Paris, who rebuilt it and installed a 2.3-liter ST engine.Thierry Sabine acquired the Porsche from Balsa around 1971 and used it for rally reconnaissance. Around 1980, the car was sold to Bertrand Lenoir of Paris, who installed a 2.0 engine from a 911 T. It was acquired in the mid-1980s by a Mr. Noirot of La Châtre, who promptly disassembled the car and began a restoration. In 2002, the uncompleted project was sold to a European collector, and the restoration continued intermittently until 2006 when the unfinished car was placed into storage. Belgian Porsche lightweight restorer and dealer Kobus Cantraine discovered the car in 2014.Cantraine acquired the project and in late 2015, (along with Porsche specialists in Belgium) completed the restoration, installing a factory original half roll-cage, a pair of NOS Heuer Monte Carlo stopwatches, 911 R-specific ignition kill switches, a Monza three-spoke leather and alloy steering wheel.The car is finished in its correct 1967 Tour de Corse livery complete with a perfectly recreated No. 96 Tour de Corse hood sticker. There are duplicated 'Rally des 10.000 Virages' door stickers used on cars in the 1967 Tour de Corse, and reproduction number on the driver's door attached with black tape. The original matching-numbers 901/22 magnesium-cased engine, number 508005, is installed in the engine bay. It had been well-cared-for after its 1969 sale, remaining with Merlin until 1973, then passing to Raymond Touroul in Paris. It then resided with a private Porsche collector of Compiegne, France until mid-2015, when Cantraine purchased it for reunification with its original chassis. Gustav Niche in Stuttgart was tasked with fully rebuilding the engine.
By Daniel Vaughan | Nov 2021

1967 Porsche 911R's that have appeared at auction but did not sell. 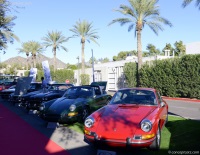