Sold for $3,635,000 at 2021 RM Sothebys : Monterey.
The Ferrari F60 was a modern-day tribute to the 275 GTB/4 NART Spider and just ten examples were built. They were introduced to the public in October of 2014 and built on an entirely new chassis design with a powerplant derived from the Ferrari F12. Ferrari had officially entered the United States market in 1954 which allowed them to grow their road car business even further. Italian-born Luigi Chinetti became the company's exclusive imported in the United States and was instrumental in the company's success in this market. Chinetti's relationship with Enzo had begun many years prior, and he even won both the 24 Hours of Le Mans and the 24 Hours of Spa behind the wheel of a Ferrari 166 MM. This was just one of Chinetti's three overall victories at the 24 Hours of LeMans and one of two victories at Spa. Chinetti was initially based in New York City and later in Greenwich, Connecticut. During Chinetti's free time, he also fielded a racing team - the North American Racing Team, or NART. Among the list of drivers who drove for NART included Pedro Rodriguez, Bob Grossman, Masten Gregory, Phil Hill, Jochen Rindt, Lorenzo Bandini, John Surtees, Bob Bondurant, and Jean Guichet. During their active racing years, from 1958 to 1982, the NART team had numerous successes and helped build the reputation of both Ferrari and Chinetti's dealership.
When Ferrari introduced the 275 GTB/4, Chinetti recognized an opportunity to have a handful built as convertibles for the U.S. market. These became known as the 275 GTB/4 NART Spider, and although Chinetti ordered 25 examples, only 10 examples were eventually built.
The Ferrari F60 America paid homage to Ferrari's long-standing relationship with North American and models such as the Ferrari 275 GTB/4 NART Spider. Just like the NART Spider, only ten examples of the F60 America were built, and they were also an open-top two-seater with a front-mounted, naturally aspirated V12 engine with rear-wheel drive. When the F60 America was released in 2014, all ten examples had been spoken for. This particular example is finished in Blue Nart with weather protection provided by either a fabric top, that can be stowed away when not in use, or a three-piece carbon fiber hardtop with bespoke storage crate. The 'egg crate' grille styling was similar to those found on 1950s and 1960s road cars. Badges located on both front fenders proudly commemorate 60 years of Ferrari in America. The large chrome fuel filler door is reminiscent of the external 'quick fill' fuel caps located on Ferrari competition cars of the 1960s.The dash, door panels, and console are wrapped in dark navy-blue leather with red deviating stitching accented by rich dark red carbon fiber trim. The driver's seat is trimmed in red leather with an American star and stripes center line. The center console armrest is trimmed in the same red leather as the driver's seat. It has a similar 60-year badge as the one found on the fenders. The passenger seat is trimmed in the same navy-blue leather with red deviating stitching as the rest of the interior, with an American star and stripes center line. A plaque is affixed between the seats noting 'Nr 1 of 10.'This Ferrari F60 America has 2,105 miles on its odometer.
By Daniel Vaughan | Dec 2021

Ferrari F60 Americas That Failed To Sell At Auction

2014 Ferrari F60 America's that have appeared at auction but did not sell. 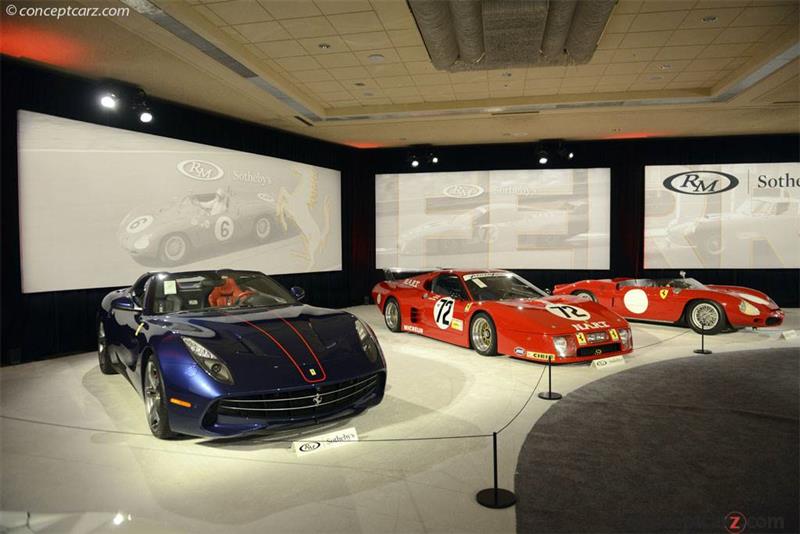