Sold for $3,140,000 at 2021 RM Sothebys : Monterey.
The Woking, England-based automaker endowed the McLaren Speedtail with all the technology and innovation learned through years of motorsport competition, pushing the limits of design and performance. It was built around a lightweight, carbon fiber tub reinforced with titanium strands and clothed with a 'teadrop' shape surmounted by a one-piece glass canopy. Like its predecessor, the legendary McLaren F1, the Speedtail used a three-person seating configuration and vertical-dihedral doors, this time making full use of lighter materials unavailable to McLaren in 1992.The hybrid powertrain combines a 4.0-liter twin-turbocharged V8 engine with an electric motor and battery. The engine delivers 750 horsepower and the electric motor offers an additional 312 horsepower. The dielectric cooled and insulated 1.647-kWh battery was, at its debut, the most power-dense unit ever fitted to a production vehicle. The combined output was a formidable 1,035 horsepower, giving the Speedtail a reported top speed of 250 mph.The multi-link suspension was composed of aluminum alloy and it rode on distinctive static wheel covers wrapped with bespoke Pirelli tires. The vehicle, with its elongated carbon fiber bodywork, was 16.8 feet long, and the fastest, most aerodynamic, and most technologically advanced McLaren ever made. It was devoid of side mirrors, instead used hideaway cameras, which retract back into their respective panels during activation of the Speedtail's exclusive 'Active Velocity' mode. This process lowered the car several inches and changed the aerovane configuration, thus streamlining the silhouette for extreme stability at high speeds.
A McLaren Speedtail prototype was driven at the Johnny Bohmer Proving Grounds on December 19th of 2019 where it reached - over 30 times - during the test session.
This particular example is number 81 of just 106 examples built (which paid tribute to the 106 examples of the McLaren F1 built). This example received over £389,500 ($539,540) of bespoke and optional equipment. Additionally, the car has since been fitted with the MSO center roof scoop made available to Speedtail owners as a post-delivery upgrade. The functional carbon-fiber roof scoop is reminiscent of the McLaren F1 and costs in excess of $100,000.This Speedtail is finished in blue stained carbon fiber with the MSO Contour Paint Effect at a cost of £80,000 (nearly $110,000). The blue carbon fiber fades to clear gloss carbon fiber in the side scoops, on the front hood scoops, and front bumper, tying into the gloss carbon wheel covers, diffuser, and front splitter. The 10-spoke wheels are blue with a diamond cut, complemented by the McLaren Orange brake calipers. Materials used throughout the interior and exterior make extensive use of aluminum, Zircon trim, and titanium. The dashboard is a distinctive three-seat cockpit trimmed in black and blue Aniline leather. The carbon fiber steering wheel is appointed in black leather and there is a pair of billet titanium paddle shifters.Each of the 106 Speedtail examples was purchased by pre-selected customers before the model's announcement. This example has just 396 miles on its odometer.
By Daniel Vaughan | Dec 2021

Recent Sales of the McLaren Speedtail

McLaren Speedtails That Failed To Sell At Auction

2018 McLaren Speedtail's that have appeared at auction but did not sell. 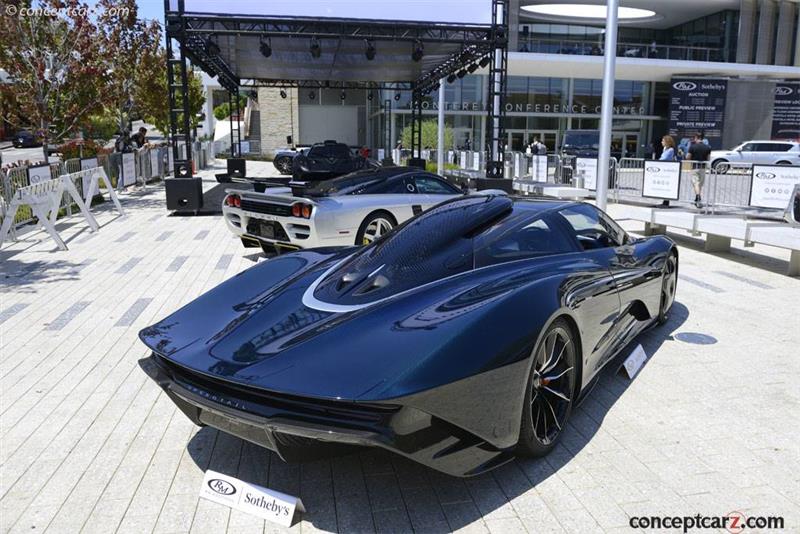