This 1935 Pierce-Arrow Model 845 Four-Door Sedan is a left hand drive vehicle with a 400 cubic-inch eight-cylinder engine that produces 140 horsepower. Its three-speed manual gearbox sends power to the rear wheels while the four-wheel mechanical brakes provides the stopping power. It is dark green with a green interior. At the 2006 Christies Auction in Monterey, CA at the Jet Center it was expected to fetch between $45000-$65000. The lot with chassis number 2090110 was sold for $49350.This vehicle sits on a 138 inch wheelbase and has undergone a mechanical upgrade which replaced the original 385 cubic-inch engine with a 400 cubic-inch unit.George N. Pierce began producing automobiles in 1901. Prior to this his talents were used for making everything from bicycles to birdcages. The first automobile by Pierce was the Motorettes and powered by a DeDion Bouton engine. Within a few years, the vehicles were powered by two-cylinders. In 1904 the Pierce Great Arrow was introduced and its four-cylinder engine with stylish body and superior durability made it extremely popular and sought after. By 1907 Pierce raised the bar even further by offering the Great Arrows with six-cylinder engines. By 1909 the company had changed its name to Pierce-Arrow.
The bodies were comprised of cast-aluminum and throughout the vehicle only the finest materials could be found. The vehicles pioneered the use of power brakes and hydraulic tappets. They were elegant, powerful, reliable, and mechanically advanced. The designs were equally advanced. In 1913 the Pierce-Arrow continued to distinguish itself from the competition by incorporating fender-mounted headlamps which now came standard on all series. Perhaps the pinnacle of mechanical stature was the Model 66 which had a 60 horsepower six-cylinder engine and sat on a wheelbase that was in excess of twelve feet. The price tag was equally as impassive, setting the buyer back between $6500 to $8000.
After World War I the company experienced difficulties due to a variety of problems. In 1924 the company introduced the Series 80 which proved the versatility of the company. Competition had become very fierce for the high-priced automotive segment so Pierce had made the decision to create a lower-priced automobile that continued the company's reputation for elegance and reliability. It was powered by a six-cylinder engine. The six-cylinder engine may have been part of the ultimate demise of the company. Other marques were offering larger eight-cylinder engines which Pierce was stubborn and felt that the six-cylinder engine was more than adequate. As a result, the competition continued to improve and expanded their clientele base. By 1930 Pierce was playing 'catch-up' as they poured much money and resources into the development of an eight-cylinder engine. Once again, they were a few years too late as many marques introduced twelve-cylinder units. Within a few years Cadillac and Marmon shocked the world with their impressive sixteen cylinder engines that were far suprioer to the rest of the market. The Pierce eight was a technically advanced engine in all respects. It was outfitted with the best materials and built to high standards and workmanship. By 1931 Pierce had introduced a twelve cylinder engine and was again a player in the multi-cylinder race. A union with the Studebaker Company was expected to help during the hard times brought on by the Great Depression. The union would prove to be a failure and by 1933 the Pierce-Arrow Company entered receivership. The company was reorganized and by May of 1935 was free of bankruptcy. The company focused on generating revenue for the struggling company. In in effort to cut costs, there was little development and few new designs for the next few years. The Packard Company was managing to stay afloat by creating a lower-cost line that appealed to a broader market segment and had increased revenue and sales. Pierce-Arrow attempted to mimic their achievement by introducing the low-priced One-Twenty model. The move may have worked if it had been done earlier, and Pierce-Arrow was forced to cease production in 1938. On Friday, May 13th the company was sold at auction.
By Daniel Vaughan | Apr 2008

Before entering the automaking business in 1901, the George N. Pierce Company of Buffalo, New York had been engaged in making such diverse products as birdcages and bicycles. Pierce's first cars were called Motorettes and were powered by De Dion Bouton engines. By 1903 Pierce was building two cylinder cars, with their Pierce Great Arrow four cylinder cars arriving the following year. Great Arrow's model line of models expanded to include six cylinder cars in 1907 and two years later the name was changed to Pierce-Arrow. Only the finest materials were used in these motor cars including complex but immensely strong cast aluminum bodies. Through the years Pierce also pioneered the use of power brakes and hydraulic tappets, and in 1913 the marque's most distinguishing feature first appeared when fender-mounted headlamps became standard on all series.

While the cars found great success and acceptance at the highest social and governmental levels (Pierce-Arrows were the official White House automobile for many years), perhaps Pierce's greatest mechanical tour de force in the early years was the gargantuan Model 66. With a rating of 60 horsepower and a 5 x 7 bore and stroke in its six cylinders, these road-going locomotives rode on a wheelbase of over twelve feet and cost anywhere from $6,500 to $8,000 depending on the body style specified by the well-heeled customer. The Dual Valve Six appeared in late 1918 and shortly afterward Pierce-Arrow went through several years of turmoil as company ownership as well as the engineering and executive staff went through some key changes. To expand their market Pierce brought out the Series 80 in 1924. This was a lower priced and more modern-appearing car than the senior autos, but it was still a six cylinder, as Pierce stubbornly clung to the credo that a six was the ideal powerplant. Meanwhile the competition offered V and straight eights; Packard had even offered twelves during the early 1920s. It would not be until 1930 that Pierce brought out an eight cylinder car, just in time to be trumped by the V12s and V16s of Cadillac, Marmon and Lincoln. Nonetheless, it was a superb engine in the Pierce-Arrow tradition of thorough, proven engineering applied via the best materials and highest standards of manufacturing and workmanship. Pierce and Studebaker had merged in 1929 although the Buffalo automaker remained an independent entity in terms of development and manufacturing. They played a quick and successful game of catch-up in the multi-cylinder race, bringing a new and magnificent V12 engine to market in late 1931. But the marriage to Studebaker was proving less than felicitous and in 1933 the South Bend firm went into receivership, taking Pierce-Arrow down with it. Their troubles continued for another year, but with reorganization the company was operating free of bankruptcy by May of 1935. With the company focused on their financials, the design of the cars went relatively unchanged during these tumultuous times, with distinguishing features that emerged being the increased convexity of the headlight lenses, as well as the three hood doors arranged in a straight line.

This particular car rides on a 138inch wheelbase and underwent a mechanical upgrade giving it a displacement of 400 cubic inches instead of 385. Despite being an older restoration this Pierce-Arrow has been attended to mechanically, which is experienced when you drive the car as it is a sheer joy to tour. With a tidy engine bay and under carriage, it is clear that this car has been well looked after. The bodywork and shut lines are very straight, only showing signs of gentle use over time. Finished in a most attractive shade of dark green, the paintwork has aged graciously, and still presents itself extremely well. The fabric interior has similarly held up quite well over the years, and with its period correct green tone, the interior compliments the exterior finish of the car. 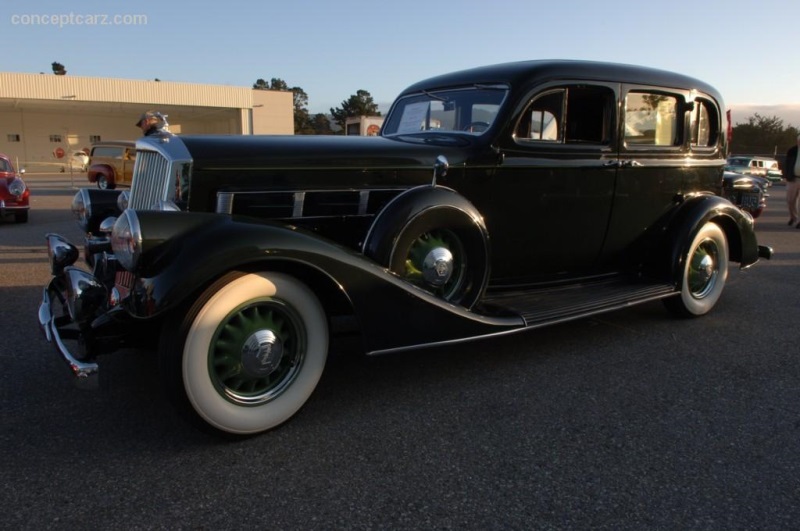 One could certainly be off and running knowing this later model Pierce-Arrow has enjoyed the attention and care to make it a pleasant and reliable tourer.Source - Christies
No auction information available for this vehicle at this time.

1935 Pierce-Arrow 845's that have appeared at auction but did not sell.