Sold for $3,725,000 at 2012 Gooding and Company - Pebble Beach Auction.
The Jaguar XK120-C, or C-Type as it became known, was built by Jaguar from 1951 to 1953. A total of 53 were built, 43 of which were sold to private owners. Jaguar C-Type with chassis number XKC-050 was finished in British Racing Green, body number K-1050, and engine number E1049/8. It received registration ZU 2357, and just a month later it was entered in the 1953 Tourist Trophy at Dundrod near Belfast in Ireland, a World Sports Car Championship event. Kelly and Jack Fairman drove XKC-050 on September 5th to 2nd in Class and 7th overall. Six days later, the C-Type was entered by Kelly in the Irish circuit known as The Curragh, for the Wakefield Trophy race, where Kelly finished 2nd overall. A day later, it raced in the O'Boyle Trophy Handicap to a 5th place overall finish. For the 1954 season, Kelly raced it in July at the Leinster Trophy event held at Wicklow, where he finished in 2nd place overall. A week later it raced at Carrigrohane in Cork, Ireland, and brought home a 3rd place finish. In August, Kelly and XKC-050 returned to The Curragh to compete, with another 2nd place finish in the Wakefield Trophy. It placed 3rd overall in the O'Boyle Trophy Handicap event.
Driving duties were entrusted to Joe Flynn and Torrie Large for the 1954 Tourist Trophy in Dundrod, and against very stiff competition, finished 13th overall.
In 1955, the C-Type raced at Oulton Park in Cheshire, England, for the British Empire Trophy. During the race, Bob Berry drove his XK120 into the back of Kelly and XKC-050, forcing a rather severe accident to the coachwork. Kelly retired from racing and sold the C-Type to Paul Emery. C. Unsworth is also recorded as a mid-1950s owner. Around this time, the car was rebuilt and refinished in bright red. From there, the car made its way to the Wayside Garage in Rusper, West Sussex, run by Alan Mann and Roy Pierpoint. It is known that Alan Mann raced a C-type early on in his career, and it is likely XKC-050 is that very car.Keith Jeans purchased XKC-050 from the Wayside Garage in 1959 and registered it as 333 GMT. Along with road use, Jeans raced the car at Wiscombe, Brighton and Weston-Super-Mare with some success, receiving multiple class wins.David Harvey of Surrey, England was the car's next owner and retained it until 1965 when it was sold to Jeremy Broad of Warwickshire, England, before being passed to Bryan Corser of Shrewsbury. Mr. Corser commenced a two-year rebuild of the C-Type, and upon its completion it received registration SVM 737. In 1983, the XKC-050 was offered for sale by DK Engineering, at which time Bob Baker of Omaha, Nebraska, purchased the car. The car was restored prior to its arrival in the US. In 1984, the C-Type was bought by the previous owner.In 1985 the Jaguar was sent to Phil Reilly & Company for complete restoration as needed. After the work was finished, the car was taken to the Kansas City Grand Prix with David Love given driving duties. The car also competed at the St. Louis Grand Prix and the Monterey Historics. It ran the 1986 and 1987 Mille Miglia, then the 1987 Monterey Historics, and then back to the Mille Miglia in 1989.Along with several appearances at the Monterey Historics, it has competed at the Coronado Festival of Speed, Lime Rock Historic Festival, Wine Country Classic, Goodwood Revival Meeting and Monaco Historique Grand Prix. The car has additionally participated in numerous Colorado Grands, Copperstate 1000s, California Milles and the Japan Mille Miglia, and C- and D-Type Jaguar Tours.
The engine was removed from the car in 1997 and rebuilt by Intrepid Motorcar Co. in Sparks, Nevada. The engine was fitted with the standard dual SU carburetor set up and placed on a display stand. The engine currently installed is a proper type motor, specified for racing with the triple Weber combination, built in 2011 by John Anderson Racing.
In 2010, the C-Type was given a complete chassis overhaul by Thomas Vintage Motors of Boulder, Colorado.
By Daniel Vaughan | Feb 2020

1953 Jaguar C-Type's that have appeared at auction but did not sell. 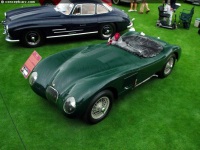