Sold for $71,500 at 2017 RM Auctions : Amelia Island.
Conceived and constructed in Northern Switzerland at the Gebrider Zimmerli factory in Reiden between 1946 and 1949, this two-seater was their solitary effort to construct a showpiece for their body-work capabilities. The tubular chassis was of their own design, while the alloy bodywork was done single-handedly by an Italian body man who remained to work after being locally interned during World War II. The car features a Vauxhall knee-action independent front suspension. Other than a new coat of paint every twenty years or so, the car remains an unrestored original with less than 1,600 miles recorded. Fritz Zimmerli, now in his 70s, was an apprentice at the time of construction, and remembers the car well and has provided photographs of it during construction and road testing.Vauxhall has a long history of racing, both before and after World War I. Their 30/98 model is legendary and is considered one of the fastest and finest touring cars of its era. It was an upscale manufacturer of sporting and touring cars that appealed to the well-to-do clientele that were seeking a car suitable for both road and track. Near the close of 1925, GM purchased Vauxhall, and over the years to come, changed it to a mass producer of motors for the millions. Nearly a quarter of a century would pass before another new sporting Vauxhall model would emerge.
As the Second World War came to a close, all types of automobiles were in very short supply as production had been halted to aid in the war efforts. In Switzerland, this was very true, as many of the cars were imported. Werner and Fritz Zimmerli were Vauxhall and Chevrolet dealers in Reiden, Switzerland. Fritz's son, Fritz, Jr., was apprenticed to the business, Gebrüder Zimmerli (Zimmerli Brothers). Fritz Jr. convinced his father and uncle that there was a demand for a two-seat sports car based on standard Vauxhall parts. The result was the Zimmerli-Vauxhall Roadster.
The car was equipped with a 2,275cc overhead-valve six-cylinder engine from the Vauxhall Velox. It was essentially a small Chevrolet engine offering about 54 horsepower. There was a three-speed column-shift Vauxhall gearbox, a live rear axle, and high speed gears. The frame was constructed from a double-tube setup and adapted the front suspension of the Velox, featuring a Dubonnet independent setup that used torsion bars in addition to Dubonnet's usual oil-filled spring-shock absorber units. The body was formed by Zimmerlis' panel beater Enrico Basetti. It was formed from aluminum, except for the doors which were made of steel to increase its rigidity. There are steel disk wheels and baby moon-style hubcaps.This car was on display from 1950 until 1968 at the Gebrüder Zimmerli in Reiden. It was acquired by a Swiss collector named Zavier Heller, who retained the car until 1999. It was later brought to the United States. It is completely original except for part of the exhaust system and a repaint. The car has been carefully maintained and sympathetically used. The odometer shows just 2,600 kilometers. In 2008, this Roadster was offered for sale at the 'Quail Lodge, A Sale of Exceptional Motorcars and Automobilia' presented by Bonhams Auction. The car was estimated to sell for $100,000 - $140,000 but left the auction unsold.General Motors purchased Vauxhall in 1925 for the sum of $2.5 million. At the time, Vauxhall's main competitor was the Ford Motor Company. After the purchase, there was a wave of American influenced styling in Europe that persisted through to the 1980s. This vehicle was a concept car (prototype) first shown at the 1949 Earl's Court Motor Show in London. It was hand-built by Zimmerli Brothers Coachbuilders in Switzerland for Vauxhall. It had a design that was in contrast to the austere models Vauxhall was creating at the time.
This vehicle had recently completed a restoration when it was brought to the 2009 Meadow Brook Concours d'Elegance. That was the first time the Vauxhall had been shown since 1949.

Vauxhall Zimmerli Velox 18-6s That Failed To Sell At Auction

1949 Vauxhall Zimmerli Velox 18-6's that have appeared at auction but did not sell. 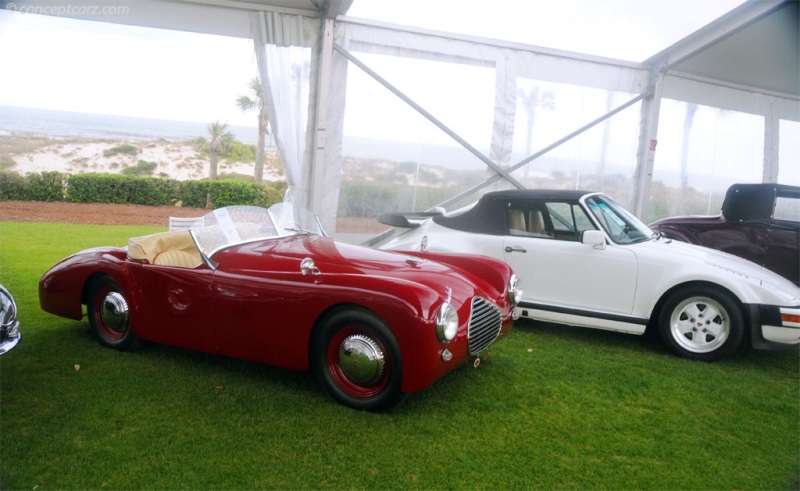